Asad estimated that in last year's election, the overwhelming majority of the Druse voted for Yisrael Beytenu. 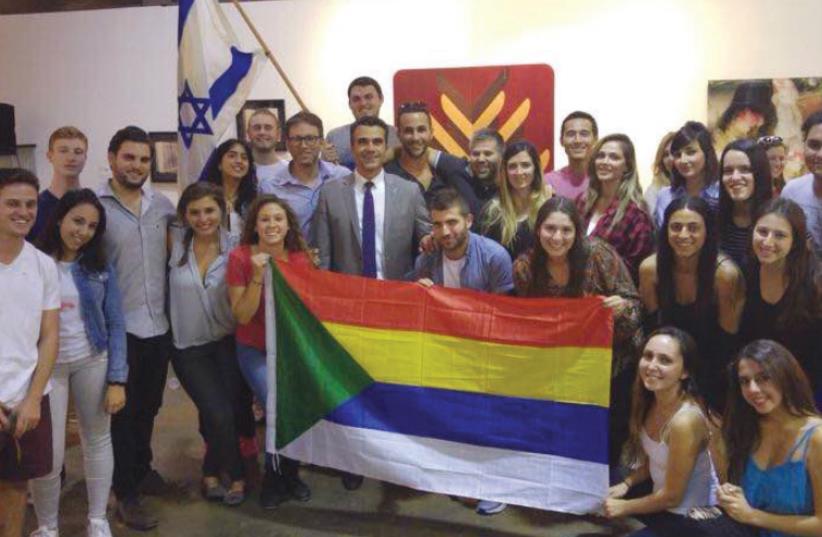 THE DELEGATION poses with Druse and Israeli flags in California.
(photo credit: EINAV HALABI)
Advertisement
Asad is not the typical name for an activist in Education Minister Naftali Bennett’s religious Zionist party, Bayit Yehudi.But Eyal Asad from the northern Druse village of Kisra-Samia is a proud Bayit Yehudi member who hosted MK Nissan Slomiansky in his village on Tuesday, wants to serve the party in the Knesset, and is trying to sign up thousands of new members from the Druse sector in the party’s online membership drive that began on Monday.“We in the Druse sector were always part of religious Zionism,” Asad said. “We are overwhelmingly on the Right, we believe it is important to fight for the state and that it is wrong to dishonor it. It is important for the world to know how we feel at a time when Israel needs better public diplomacy.”Asad believes he can bring close to one mandate of support to Bayit Yehudi from the Druse community. He tells potential Druse supporters of the party that its ministers and MKs are responsive and helpful to the sector, especially Bennett and Justice Minister Ayelet Shaked.MK Bezalel Smotrich also visited the Druse sector, listened to its concerns, and helped change criteria for helping disadvantaged teens, Asad said.“I don’t think there is a single Druse who is not proud of being Israeli,” Asad said. “The name Bayit Yehudi that means Jewish home should not impact non- Jews from coming. Bennett welcomes us with open arms.”Bayit Yehudi’s forerunner, the National Religious Party, only accepted religiously observant Jews as members. Bennett has welcomed secular Jews like Shaked, as well as Jews and Arabs. An Arab woman ran for Knesset with the party last year, and current Kulanu MK Akram Hasson, who is Druse, was briefly a member of Bayit Yehudi.“Our connection to the Jewish people goes back centuries to the time of Jethro, the father-in-law of Moses,” Asad said. “The Jewish people has survived more than 3,500 years because of the Torah. The Druse are also an ancient people. How can a small nation of 1.5 million people in the world survive for so long? We also passed on our traditions. We raise our heads and say we are part of the State of Israel – in fact, we are its heart and soul.”Asad is a strong proponent of Jews settling Judea and Samaria, and of Orthodox Jewish and Druse religious values. He is a critic of homosexuality, saying that it “goes against nature.”In the past, the Labor Party has had Druse MKs and even had a Druse minister, Salah Tarif, who served in former prime minister Ariel Sharon’s government from 2001 to 2002. Shas and United Torah Judaism have had Druse campaign teams in past elections.There are currently two Druse MKs, both of whom are right-wing: Deputy Regional Cooperation Minister Ayoub Kara (Likud) and Yisrael Beytenu MK Hamed Amar. Asad estimated that in last year’s election, the overwhelming majority of the Druse voted for Yisrael Beytenu.“Ayoub and I agree on ideology, but he neglects the needs of his community and got almost no support among the Druse in the last election,” said Asad.“Amar has also failed to help our sector, so there is a vacuum that is open for Bayit Yehudi.”