Eyal Assad said the connection between religious Zionism and the Druse sector is natural, because they are both Zionist and right-wing politically. 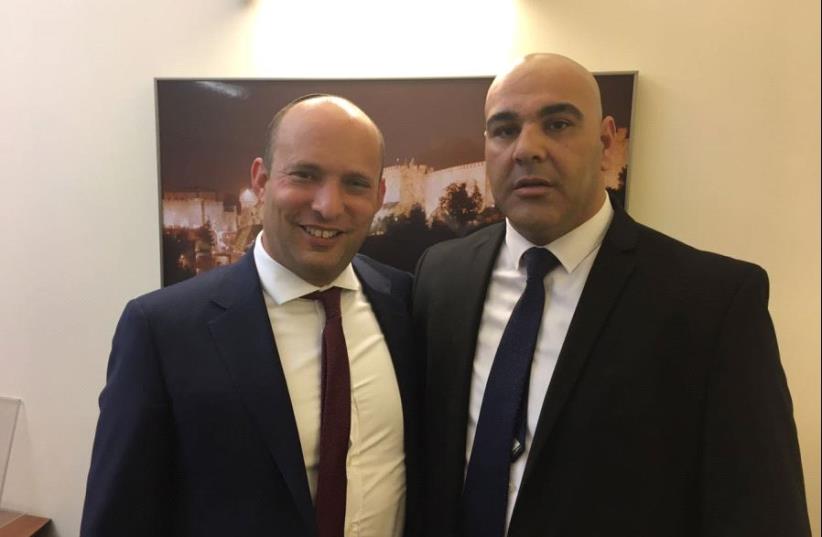 Naftali Bennett and Eyal Assad
(photo credit: COURTESY EYAL ASSAD)
Advertisement
The religious-Zionist Bayit Yehudi party could have its first non-Jewish MK in the next Knesset after the Druse sector nearly unanimously supported party head Naftali Bennett in last week’s leadership race, according to results released Tuesday.Bennett received 100% of the 523 votes in the Druse villages Julis and Kisra-Samia, the home of Druse Bayit Yehudi activist Eyal Asad. Bennett received 54 of the 55 votes in the Druse village Hurfeish, with the other going to challenger Yonatan Branski. Branski said the vote came from a Druse soldier who served under him in the IDF.“Eyal Assad is the real winner of the election,” said Mevaseret Zion branch head Jeremy Saltan, who is close to Bennett.Saltan said it was likely that Assad would win a realistic slot on the party’s list for the next Knesset, because the members he drafted to the party proved themselves to be disciplined and loyal.Assad said he registered some 1,400 people to the party but that the turnout was lower than among Jewish voters because the election was held on a Druse holiday. Assad gave Bennett credit for the 100% result, noting that he spent the day before the election campaigning in Julis.“Naftali worked hard here,” Assad said. “People joined the party because of its charismatic leader, his ideology, and what he is doing to help this sector. People simply love him here. The Druse did not know the other candidates.”Assad said the connection between religious Zionism and the Druse sector is natural, because they are both Zionist and right-wing politically.He said he had not yet decided whether to run for the next Knesset, but that he is being urged to run by the Druse in the party.“There are plenty of people saying we should have a representative in the Bayit Yehudi faction in the Knesset,” Assad said. “They want me to run. I would be happy to, but I am not hurrying to tailor any suits yet.”Current Kulanu Druse MK Akram Hasson ran in the last Bayit Yehudi primary and did not fare particularly well. Neither did Anett Haskia, an Arab woman who ran. Bayit Yehudi’s forerunner, the National Religious Party, had a rule requiring candidates to sign a document saying that they were religious Jews.Bennett won in every community except Peduel in the Shomron Regional Council, which is the home of candidate Yitzhak Zagha, who won 7.48% of the total vote in the race, compared to 12.22% for Branski and 80.31% for Bennett.