Should the bill go to a vote, it could have a chance of passing in the committee, which could embarrass and put pressure on Netanyahu if he is not on board with it. 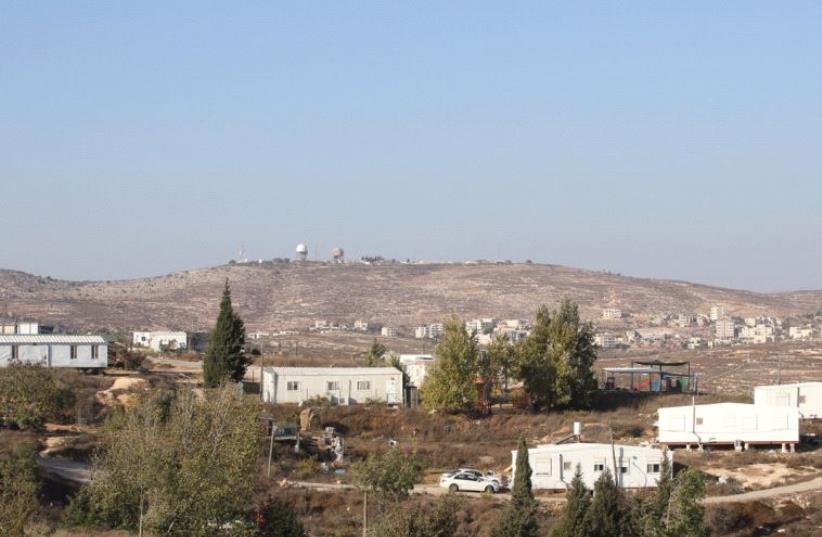 THE AMONA OUTPOST is seen in the Binyamin region of the West Bank
(photo credit: MARC ISRAEL SELLEM)
Advertisement
A Bayit Yehudi bill meant to legalize homes in the disputed outpost Amona is on the Ministerial Committee for Legislation’s agenda for Sunday, putting pressure on Prime Minister Benjamin Netanyahu to allow the residents to remain in their homes.Should the bill go to a vote, it could have a chance of passing in the committee, which could embarrass and put pressure on Netanyahu if he is not on board with it.The bill, proposed by Bayit Yehudi faction chairwoman Shuli Moalem-Refaeli, would save Amona, which is slated to be demolished on December 25 following an order from the High Court of Justice, by finding a legal arrangement for homes built in the West Bank with government approval and later found to be on land owned by Palestinians. Amona was first built in 1995, with NIS 2.16 million from the Construction and Housing Ministry.The proposal would have the state pay “generous” compensation to the landowners in land and money, while legalizing the existing homes. The MK said the bill would be the equivalent of the state using eminent domain, which it has done in other circumstances.Moalem-Refaeli wrote a letter to Netanyahu offering an alternative, by which she would pull the bill from Sunday’s agenda, if the government declares the land on which Amona was built on to be abandoned land, bringing it under the state’s possession, thus allowing the outpost to remain where it is, without having to go through the legislative process and without necessarily providing any kind of compensation for the Palestinians claiming to own the land.The government has, since the establishment of the state, only declared sovereign land abandoned, and not land in the West Bank.“The hourglass for legalizing the settlement is running out and we are getting closer to the critical time for a solution that will leave Amona on the mountain,” Moalem-Refaeli wrote. “As we see in recent weeks, the work is moving slowly for some reason, and is not moving towards a solution.”The Bayit Yehudi MK said that an instruction to declare the land abandoned would speed up the process of finding a solution, and the fact that the government has not done so makes it seem that the prime minister does not want to save the outpost from demolition.“Mr. Prime Minister, it is in your hands to save Amona. If you decide to fight for it, as you fight on other matters on your agenda, children will not be thrown out of their homes in a few weeks,” Moalem-Refaeli wrote.The Likud responded that Netanyahu is responsibly leading the effort to find a solution for Amona, together with the defense and justice Ministers and attorney-general.“It’s unfortunate that there are some who can’t stand up to pressure and instead of joining the effort choose baseless and irresponsible political accusations that only hurt the solution for Amona and settlements in general,” the party spokesman said. “The prime minister will continue to keep his composure and behave responsibly to solve the problem of Amona, and those who are stressed should do the same.”Earlier this month, the state asked the High Court of Justice to delay by six months the December 25th demolition of the Amona outpost so that it can examine relocation options. At present, the state has no feasible plan to provide alternative housing for the 40 families that live in modular homes on a hilltop just outside of the Ofra settlement in the Binyamin region of the West Bank.Tovah Lazaroff contributed to this report.