Amir Peretz: Former minister spoke with ‘neither courage nor respect.’ 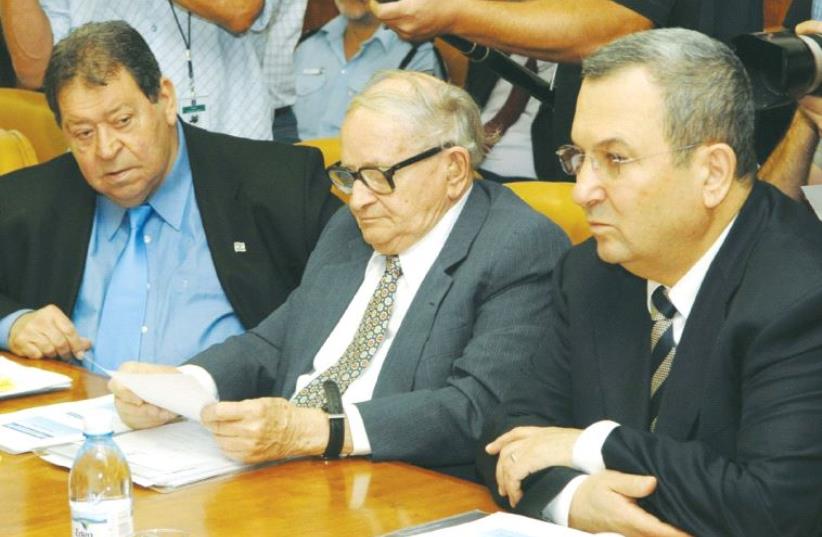 BINYAMIN BEN-ELIEZER (left) is shown during a 2007 cabinet meeting in Jerusalem with fellow cabinet ministers Rafi Eitan (center) and Ehud Barak.
(photo credit: AMOS BEN GERSHOM, GPO)
Advertisement
There is a tradition in Judaism to not speak negatively about the dead, at least not immediately after their death. But former justice minister Yossi Beilin violated that tradition following Sunday’s death of former defense minister Binyamin Ben-Eliezer.Beilin shocked Channel 1 news anchor Jacob Eilon when he slammed Ben- Eliezer on live television during the network’s evening news program on Sunday night. He enhanced that criticism on Monday in an interview in English with The Jerusalem Post.“He harmed the peace camp and the Labor movement by being such a bullying politician,” Beilin told the Post. “The fact that he did not have any real agenda or fight for anything made it clear for many Israelis that his style is a model for too many politicians in Israel.”Beilin said Ben-Eliezer also “walked on a tightrope between legal and illegal,” noting that on multiple occasions, he was investigated by the comptroller in cases that were closed only due to lack of evidence.“Having a non-ideological leader who is there only to stay there is devastating,” he said.When asked why he was violating the tradition of not criticizing the dead, Beilin said he disagreed completely with that tradition.“It is important to say such things right when [other] people are praising him as a great leader,” he told the Post.“I don’t believe you can’t say things immediately after his death. It is especially important to say them now and not two days later, when everyone will forget about him again. This is the time to tell the truth.”In the Channel 1 interview, Beilin said he had warned Labor Party chairman Isaac Herzog not to field Ben- Eliezer as the party’s candidate for president. He also said that when Ben-Eliezer was defense minister, thenprime minister Ariel Sharon actually did the work.Ben-Eliezer and Beilin clashed for years, especially when the former headed the Labor Party from 2001 to 2003. Ben-Eliezer ran for party leader on a campaign in which he compared competitor Avraham Burg as a leftist Beilin clone. After he won, Ben-Eliezer tried to fire Beilin from the chairmanship of a committee that wrote the party’s diplomatic platform.In a March 2002 Labor central committee meeting, Ben- Eliezer laid into Beilin, who had criticized him on the radio earlier that day.“I respect all voices, except one,” he said. “That of the Admor [Hassidic rabbi] Yossi Beilin. To hear that Hebrew, that hatred... it’s pure anti-Semitism.”Zionist Union MK Amir Peretz, who was once close to Beilin, sharply criticized him for speaking so negatively about Ben-Eliezer.“It was totally unnecessary and displays neither courage, nor respect,” Peretz said.“In this country, people are Innocent until proven guilty. Hatred is not a work plan. Those who think otherwise are the real reason the public doesn’t trust politicians.”But Beilin was unfazed.“I am used to criticism,” he said. “I knew there were people who wouldn't like what I say. When everyone is happy with you, you should check yourself.”