Bennett says issue not one of “right or left” but rather a bipartisan issue surrounding the IDF. 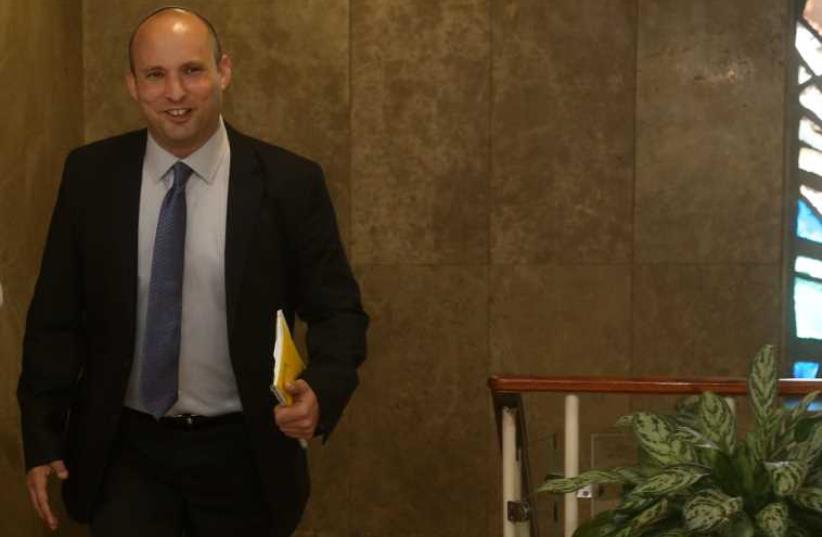 Naftali Bennett
(photo credit: MARC ISRAEL SELLEM/THE JERUSALEM POST)
Advertisement
Education Minister Naftali Bennett defended his decision to ban the Breaking the Silence NGO from the education system during a Knesset plenum session on Wednesday.“We are talking about a group who does two things, [commits] two crimes,” he said.“The first crime is to turn extreme cases and present them as the norm. They depict, and we really see this, a description that I can guarantee never happened,” he said.Bennett was responding to Meretz chairwoman Zehava Gal-On, who challenged him, asking whether he has the authority to make such a pronouncement.Last week Bennett instructed the Education Ministry to “update the director-general’s protocol,” which regulates issues within education system discourse, so that they are “clear and explicit” as to the activities of organizations that “incite against IDF soldiers,” like Breaking the Silence.The education minister responded to Gal-On’s question and said that as a representative of the state, he would act to prevent groups “causing harm to Israel” from being involved in the education system.“The worst part, MK Gal-On, is not just that they [Breaking the Silence] take extreme cases and present them as norm, but where they do this. This group hangs out in world capitals, in Belgium and New York and in France and London, all over the world and depicts these things, and slanders Israel in the world,” he said.Bennett said the issue was not one of “right or left” but rather a bipartisan issue surrounding the IDF.He added that he had consulted with the ministry’s senior professional staff, and together they decided to amend the director-general’s protocol and ban the group, as well as others that “cause harm to Israel in the world.”Gal-On accused Bennett of incitement against the NGO, and his “friends” of committing crimes against Palestinians.“All that Bennett is doing is considered lashing out and incitement. Crimes are not being perpetrated by Breaking the Silence, as Bennett claimed in his inciting response in the plenum, but by his friends who throw grenades and harm Palestinian families,” she said.She rejected his response regarding his authority as education minister and said, “Naftali Bennett has no authority to prohibit the entrance of Breaking the Silence into schools, only educators or professional committees can make such a decision.“The minister’s decision to change the director-general’s protocol on the issue of educational discourse on controversial issues, and on this basis to prohibit entry to Breaking the Silence with wild incitement against the organization, harms the authority and the prestige of school principals,” Gal-On said.“Bennett disrespects teachers and the students in that he does not trust them and does not let them hold an intelligent, respectful and productive conversation,” she said.Breaking the Silence describes itself on its website as “An organization of veteran combatants who have served in the Israeli military since the start of the Second Intifada and have taken it upon themselves to expose the Israeli public to the reality of everyday life in the occupied territories. We endeavor to stimulate public debate about the price paid for a reality in which young soldiers face a civilian population on a daily basis, and are engaged in the control of that population’s everyday life.”