Bennett invokes 2014 Gaza war in warning over 'past mistakes'

His comments came in response to Netanyhu's remarks on Monday about claims made by some, including Bennett, that his government was unprepared for the threat of cross-border tunnel raids from Gaza. 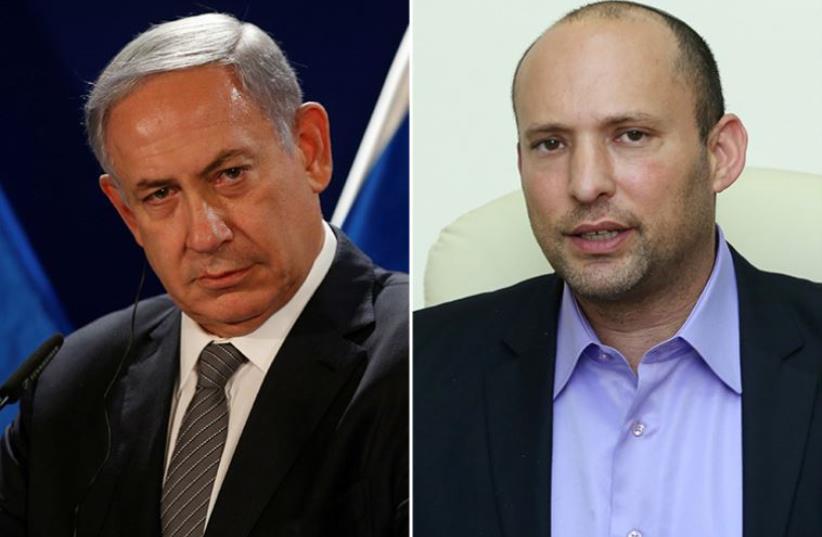 Netanyahu and Bennett
(photo credit: REUTERS,MARC ISRAEL SELLEM)
Advertisement
Education Minister Naftali Bennett and Yesh Atid party leader Yair Lapid both took shots at Prime Minister Benjamin Netanyahu on Tuesday, saying in reference to Operation Protective Edge in Gaza that those who do not learn from their mistakes are doomed to failure.About the 2014 war, Bennett said, “Every platoon commander learns from past experiences at the end of drills in order to avoid future mistakes and improve.What is true for an infantry platoon is even truer for the State of Israel’s security and political leadership.”Lapid called on State Comptroller Joseph Shapira to publish his report on the operation, which is expected to be highly critical on a number of fronts – from preparing for Hamas’s attack tunnels, to letting the war drag out for too long to poor communication between the political and military echelons.“I call upon the state comptroller to publish the report as soon as possible; the families deserve to know and the Israeli public deserves to know. The prime minister claimed yesterday there were no failures and no mistakes,” said Lapid.Lapid added that he joined Bennett’s rebuke of Netanyahu about “denying mistakes and trying to hide faults,” which means “we can’t learn the lessons of the operation.”Their comments came in response to Netanyahu’s remarks on Monday about claims made by some, including Bennett, that his government was unprepared for the threat of cross-border tunnel raids from Gaza in the leadup to the war. Netanyahu said that those claims were “the opposite of the truth.”Bennett said, “Before the next military campaign we must learn from past mistakes and not deny them.Learning from past mistakes is a badge of confidence and strength. Whoever does not learn from past mistakes is doomed to repeat them in the future.”According to a leaked version of the Comptroller’s Report that appeared in May, Netanyahu, former defense minister Moshe Ya’alon and ex-IDF chief of staff Lt.- Gen. (res.) Benny Gantz face criticism over the cabinet’s alleged lack of preparations on the tunnels.In a defense of his handling of the tunnel threat, Netanyahu said that his cabinet held discussions on the issue as early as January 2013. According to information seen by The Jerusalem Post, Netanyahu did in fact convene eight cabinet meetings between January 2013 and the eve of Operation Protective Edge to specifically address and tackle the issue of tunnels.Yaakov Lappin contributed to this report.