The principles of the bill would be that the state would issue a warning letter to internet, domain name and social media providers who indirectly host and can potentially remove the content as site administrators. 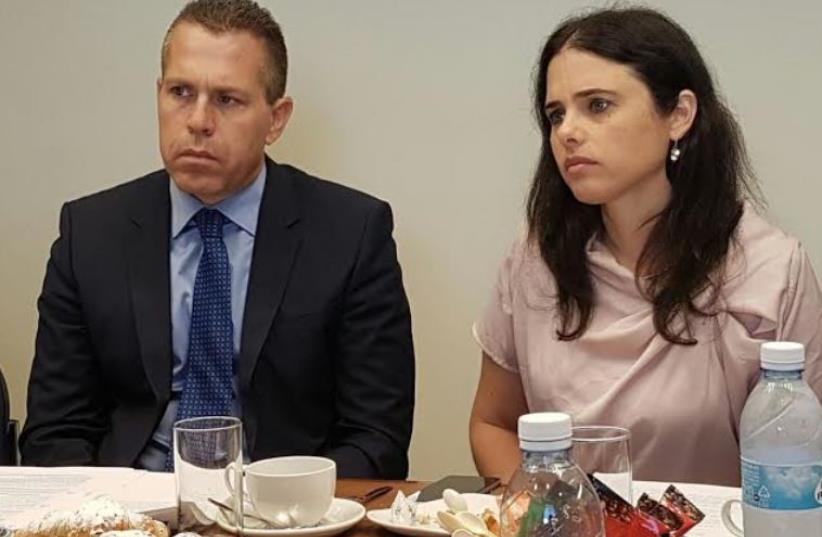 Gilad Erdan and Ayelet Shaked
(photo credit: Courtesy)
Advertisement
Justice Minister Ayelet Shaked and Public Security Minister Gilad Erdan on Wednesday announced they have instructed their ministries and the police to formulate a bill for removing terrorist content from the Internet and social media sites.The bill calls for issuing a warning letter to Internet domains and social media sites that indirectly relate and can potentially remove such content as site administrators.If the providers remove the content there would be no further action.If they fail to do so, the bill would allow the state to request the courts to issue an order, effectively forcing providers to comply.A statement from Shaked’s office did not specify what sanctions providers would face if they ignored the court order, but the threat letter would mention the country’s criminal law, suggesting a range of criminal and financial sanctions.The justice minister issued the statement following her meeting on Wednesday with top Facebook officials visiting the country.She expressed serious concerns that Facebook and other providers are not doing enough to police terrorist content being spread on their users’ sites.Various petitions to courts in the past demanding the removal of such content have often failed on account of free speech allowances, including a 2012 petition by then Israeli-Arab MK Taleb al-Sana ordering Google to remove a You Tube video disgracing the Prophet Muhammad.The bill would carve-out an exception to free speech protections in the area of inciting terrorism as has been done in recent years in other criminal areas like child pornography.

Tags terrorism on the internet
Advertisement
Subscribe for our daily newsletter