Both China and the Jews were persecuted by fascist forces and helped each other said China’s Vice Premier Liu Yandong. 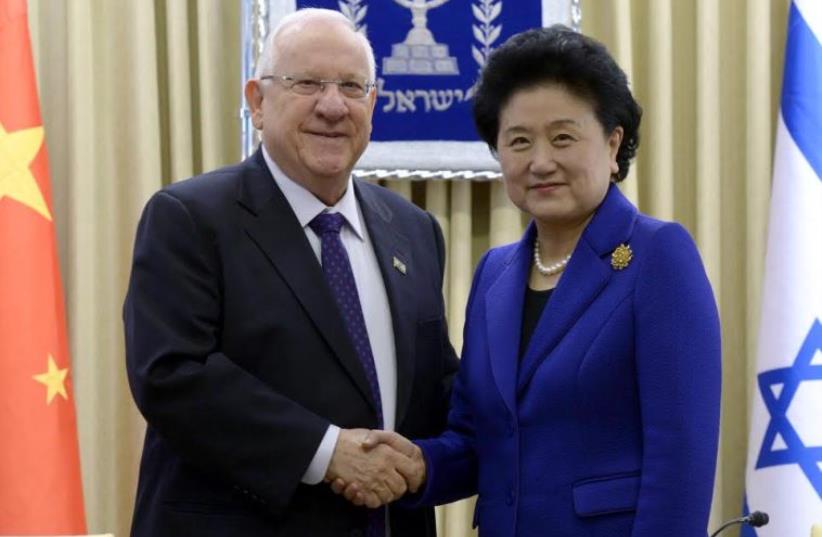 President Reuven Rivlin and China’s Vice Premier Liu Yandong
(photo credit: Mark Neiman/GPO)
Advertisement
“China takes Israel very seriously,” China’s Vice Premier Liu Yandong told President Reuven Rivlin on Tuesday. Recalling her previous visit in 2014, she said that she had been deeply impressed by Israel’s social and economic achievements and the goodwill towards China by the people of Israel.She had returned with a very warm feeling towards Israel, she said.Liu characterized her current visit as “a very important mission” in which she came to co-chair with Prime Minister Benjamin Netanyahu the Second Annual Israel-China Committee for Cooperation and Innovation, to sign co-operation agreements on education, agriculture, science and technology, intellectual property, health care and the exchange of human resources, and also to attend a meeting of Chinese and Israeli university presidents as well as a symposium on health care.Liu, as the holder of degrees in chemical engineering, sociology, and law is particularly interested in the content of these meetings.Israel is an important country in the Middle East with its own unique qualities, she said.She also recalled the Second World War, when China provided a haven for Jews fleeing the Nazis, and when Jewish doctors helped treat the wounded injured in the Sino-Japanese war.Both China and the Jews were persecuted by fascist forces and helped each other during those dark days, she said.Liu singled out Austrian Jewish physician Jakob Rosenfeld, who she said had treated soldiers and civilians alike, and had formed firm friendships with many Chinese officials  and members of the resistance including Shen Qizhen who was in charge of health services, Liu Shaoqi and Chen Yi, who would later go on to respectively become president and foreign minister of China and Liu’s father Liu Ruilong, who later became vice minister of Agriculture. After the war Rosenfeld returned to Austria to search for relatives who might have survived the Holocaust, and in 1950, migrated to Israel where he was reunited with his brother.  He suffered a heart attack two years later and died.  He is buried in the Kiryat Shaul cemetery in Tel Aviv.When Liu was previously in Israel, she inquired about the whereabouts of his grave.  On the anniversary of Rosenfeld’s death, Chinese officials have regularly placed flowers on the grave, she said.Liu commended Rivlin for his role in enhancing Israel-China relations.In welcoming Liu, Rivlin said that it was very important for Israel to host every guest from China, and he was particularly honored to be able to host the Vice Premier.He also referred to the significance of expanding the relationship between the two countries, especially because of the strong focus that each places on cyber and innovation.