Minister wants program accorded status parallel to that of IDF. 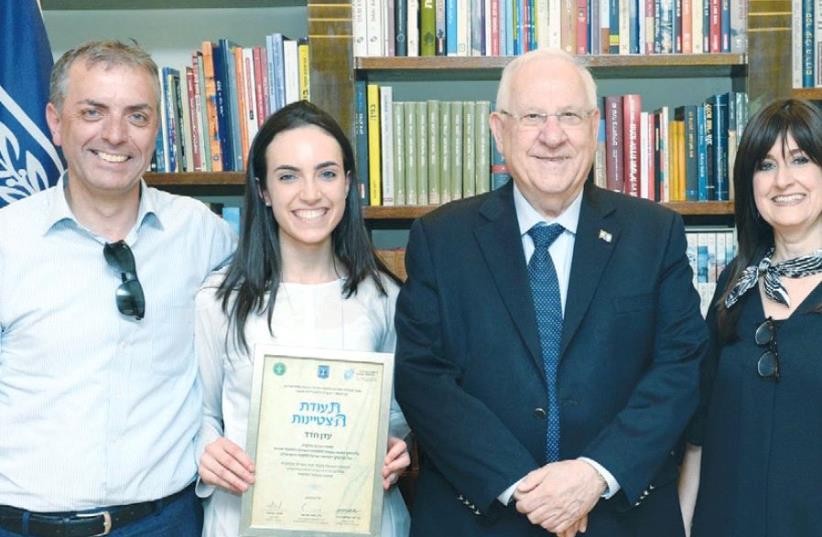 PRESIDENT REUVEN RIVLIN smiles alongside outstanding Civilian National Service volunteers at his official residence in the capital yesterday
(photo credit: Mark Neiman/GPO)
Advertisement
Civilian National Service volunteers finally received the recognition due them, at the first-ever national CNS gathering at the President’s Residence on Sunday, where President Reuven Rivlin welcomed 56 outstanding young male and female volunteers from every sector of society.There was a high ratio of Arabs – both male and female – among the honorees. There was also a high ratio of volunteers from the National Religious movement and a smaller but not insignificant number from the haredi community.It was likely the best 80th birthday present that Rabbi Zephaniah Drori, chief rabbi of Kiryat Shmona and founder of the Civilian National Service movement 40 years ago, could hope for.Among the honorees were youngsters with special needs, who wanted to make a contribution and work with younger people like themselves, whose problems they understand better than anyone else. There were also volunteers from backgrounds of socioeconomic distress, who wanted to prove that they too are capable of making a contribution, and many have grown in stature and self-esteem in the knowledge that they are improving the quality of life for others, said several leading Civilian National Service figures.While it is well known that young people in the Diaspora, particularly those with family ties to Israel, come to volunteer in the army, it is not as well known that they also come as civilian volunteers, working in myriad places of need as well as in government and state offices.Rivlin singled out Eden Hadad who came alone from Belgium and works in the political department of the President’s Bureau. Rivlin said she was a wonderful girl like so many volunteers from abroad and noted how well she had adapted to her new environment and to what she had to learn in order to do her job properly. Altogether, there are 17,000 Civilian National Service volunteers.Agriculture Minister Uri Ariel, who is the minister responsible for CNS, said that numbers are growing constantly, and the aim is to make CNS equivalent to army service. “You don’t do less than anyone does in the army,” he told the many volunteers gathered behind and in front of him. He anticipated that next year the number will be in excess of 18,000 and was looking forward to the day when it would be double that so that every social welfare need throughout the country could be handled by the Civilian National Service.Sar Shalom Jerbi, the CEO of CNS, said that Ariel had taken a hands-on interest in it, and thanked him in particular for persuading the justice system authorities to take into account when young people with criminal records have decided to do something positive for society by serving in CNS and demonstrating that they have reformed, by erasing their records. He regretted that some sectors of society still engage in incitement against CNS and hurl verbal and physical abuse at volunteers.Rivlin, noting the work the young people do in education, with youth at risk, as paramedics with Magen David Adom and as voluntary police as well as in state institutions and government ministries, told them that they are partners in Israel’s achievements.“Without you we would not be able to do what we do for ‘the other,’” he said.He also praised their parents saying that the character of person is honed in the home that he or she comes from.The president was very pleased to see such a broad cross-section of the country’s demographic mosaic and declared that “only this way, together, can we guarantee the future success of Israel as an enterprise.”