Rivlin said that as he looked around he was filled with hope even though there are times when the public spirit and the political discourse give cause for despair. 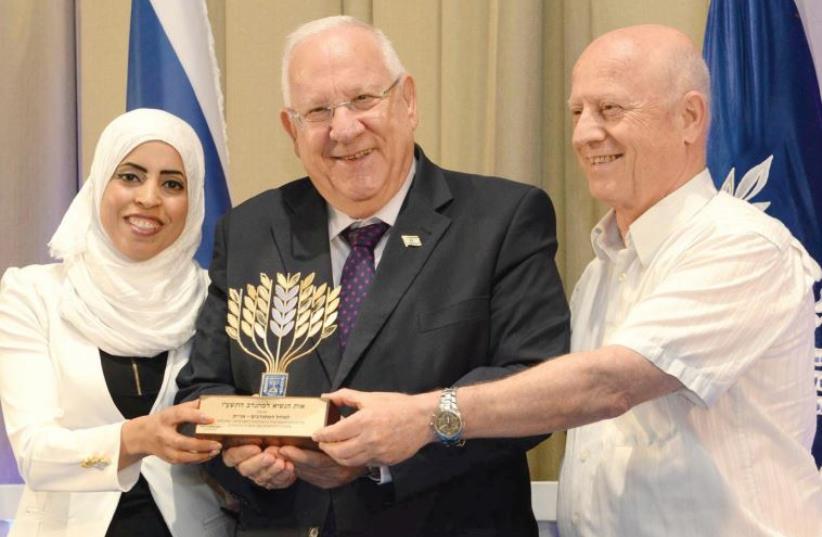 PRESIDENT REUVEN RIVLIN with volunteers from Ohel Hamitnadvim.
(photo credit: Mark Neiman/GPO)
Advertisement
Co-existence, peace and equality were key themes in speeches made on Sunday at the Iftar dinner hosted by President Reuven Rivlin at the Presidents Residence.Guests included mayors and spiritual leaders from Moslem cities,  towns and villages, Ambassadors Hazem Khairat of Egypt, Walid Obeida of Jordan, and Oybek Eshonov of Uzbekistan , Turkish Charge d’Affaires Cem Utkan, Druze officers in the Israel Defense Forces, academics, business people and members of the Sakhnin junior soccer team. Of the Arab MKs none of the members of the Joint Arab list accepted the president’s invitation including Ahmed Tibi who was very close to Rivlin when the latter was still a Member of Knesset. The only Arab legislators who participated were Esawi Frej of Meretz and Zohair Bahloul of the Zionist Union.There were also several Jewish guests in attendance.Rivlin said that as he looked around he was filled with hope even though there are times when the public spirit and the political discourse give cause for despair.Yet on the ground he could see signs of progress for improvement in  the quality of life for the Arab population and joint regional projects promoted by Arab and Jewish local authorities.Nonetheless, the president conveyed a sense of despondency as he spoke of the condolence call that he had paid earlier in the day to the family of 13 year old Hallel Yaffa Ariel, who last week had been cruelly murdered in her bed as she slept. After that Rivlin had attended the funeral of Michael Mark, yet another victim of Palestinian terrorism.Rivlin was unable to grasp that “the Palestinian leadership and society could encourage “such brutal and criminal terrorism or stand idly by.”Rivlin declared that the Palestinian leadership along with Palestinian society have a responsibility to stop the next murderer/  He deplored the fact that as yet there have been no voices of condemnation from the Palestinian leadership. Quite the opposite; they lend support to the murderers and their families.Rivlin congratulated Mazen Ganaim, Mayor of Sakhnin and chairman of the Committee of Arab Municipal Authorities for continuing to speak in a brave, clear and distinct voice.  He also commended Ganaim’s courageous leadership and his unwavering commitment to the partnership between Jews and Arabs – citizens of Israel -who both inhabit the same territory.Kadi Abed al Hakim Samara, the administrator of the Sharia Court of Appeals lauded Rivlin for his solidarity with the Moslem population and his promotion of respect for the other.  He voiced the hope that logic would prevail in a request that the Moslem population be permitted to have the Sharia Court as its sole representative on all matters pertaining to the religious affairs of Muslim society in Israel.Samara quoted from a survey taken by the University of Haifa regarding the three most important issues to Israeli Arabs.  Housing, surprisingly, was in third place, even though so many Arab families live in overcrowded environments.  But Arabs are rarely given a license to build, and thus have no master plan for their respective neighborhoods.  The second issue was education and the third personal safety and security. An overwhelming percentage of Arabs in responding to survey questions said that felt that they were being threatened by negative forces in the Jewish community.As for violence and racism, Samara said that in clashes amongst themselves and with Jews 1,132 Arabs had been killed since October 2,000.  Such a number was commensurate with a war, he said, and way out of proportion in relation to the ratio of Arabs in the overall population.   Looking out at the crowd, Ganaim said that it was good to see Arabs and Jews breaking bread together. “This is the message that emanates from the home of the president of the State of Israel,” he said. Recalling distant visions of a new Middle East, Genaim said that instead there was “a mad Middle East” beset with chaos, violence, bloodshed and racism.  “We want to see the dream of a new Middle East become a reality,” he said, as he noted that too many people are inciting young people towards war, whereas Rivlin is urging them towards peace