More coalition than opposition MKs were present during so called walk-out. 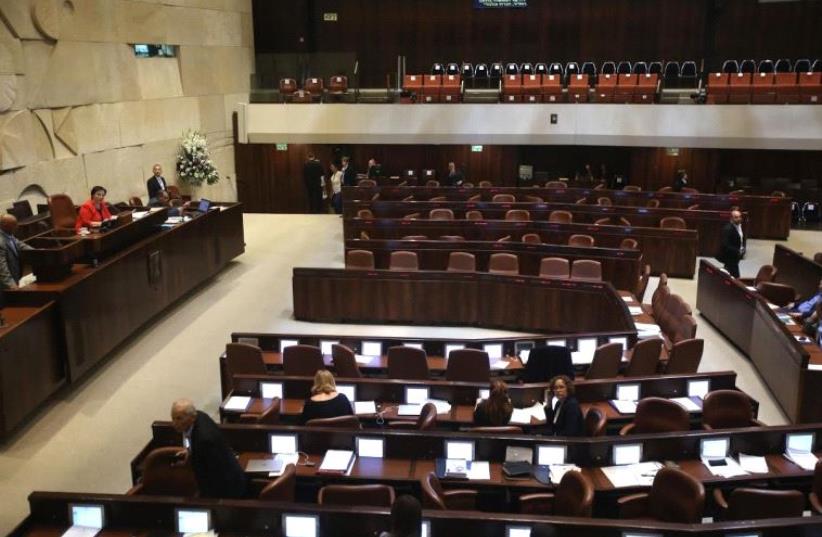 The knesset during the boycott on Oct. 31, 2016
(photo credit: MARC ISRAEL SELLEM)
Advertisement
The coalition’s boycott of speeches and motions by MKs from the Joint List in response to their skipping of former president Shimon Peres’ funeral began with much fanfare from right-wing lawmakers Monday, but it amounted to very little beyond words.In anticipation of the announced boycott, the Joint List MKs first snubbed Prime Minister Benjamin Netanyahu’s speech in the plenum, demonstratively walking out when he began speaking.Attendance of no-confidence motions tends to be very thin, and hardly anyone listened to the first one on the agenda, presented by MK Erel Margalit (Zionist Union).The situation remained the same when Joint List MK Taleb Abu Arar presented his faction’s motion.In fact, the amount of coalition MKs and opposition legislators not from the Joint List present was the same: Two. If coalition MKs who had to be there were counted – the minister on duty, Tourism Minister Yariv Levin, and the deputy Knesset speaker on duty, MK Tali Ploskov (Kulanu) – then there were twice as many of them in the plenum.Abu Arar called in his speech for an impromptu moment of silence in honor of the victims of the 1956 Kfar Kasim massacre, and in response the Joint List MKs and Meretz MK Esawi Frej stood in silence.Levin, however, took issue with their demonstration, saying that the Knesset’s plenum is not the place for it. The lawmakers who stood up shouted at Levin, saying he should be ashamed of himself, and Frej was thrown out of the meeting.Levin and Frej continued their shouting match in the hallway later.Earlier in the day, coalition chairman David Bitan (Likud) announced that the boycott would be happening as announced earlier this month, after Joint List MKs decided as a faction not to go to Peres’s funeral. However, it would only last a week, because it is “symbolic,” and there would be a minister present when required by the Knesset’s rules. In addition, he explained, it is not a blanket boycott of Arab MKs and only targets those in the Joint List.Defense Minister Avigdor Liberman said he was proud to have suggested the boycott.Speaking at a Yisrael Beytenu faction meeting, Liberman said the Joint List “represents terrorists” and pointed to past incidents in which its MKs visited the families of terrorists and said that the kidnapping of three teenage boys in the leadup to 2014’s Operation Protective Edge was not terrorism.The proposed boycott was controversial in the Likud faction.MK Yehudah Glick said he is against any kind of boycott. MK Oren Hazan said he wanted to be there to heckle the Joint List MKs. Both were present for Abu Arar’s speech, and Hazan, true to his word, shouted at him.Environmental Protection Minister Ze’ev Elkin also voiced opposition to the boycott, saying that it is not within Bitan’s authority to enforce matters unrelated to voting, but he didn’t remain to hear Abu Arar.