Leader of the delegation: We’re pleased to be friends of Israel, a democracy amid bloodshed dictatorship and lack of human rights. 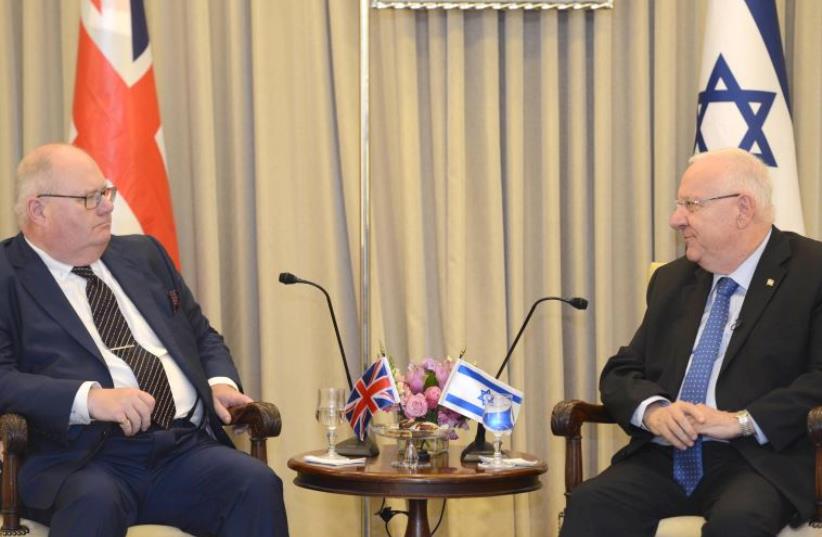 President Rivlin meets delegation of Conservative British MPs
(photo credit: MARK NEYMAN / GPO)
Advertisement
Anti-Semitism and BDS notwithstanding, Israel is not alone in the world. A delegation of Britain’s Conservative Friends of Israel that met with President Reuven Rivlin at his official residence on Wednesday affirmed its abiding friendship for Israel and its concern for Israel’s safety and security.Rivlin was quick to commend British Prime Minister David Cameron for his plan to confront the ideology of terrorism and declared that what Cameron had said should be appreciated by everyone, especially Israel.Rivlin told the delegation, led by former Tory minister Sir Eric Pickles, that more than the possibility of Iran creating a nuclear bomb, Israel is concerned about the threat of Iran’s ongoing support for terrorist organizations such as Hezbollah and Hamas, and the funding and thousands of rockets which Iran supplies to these organizations.Israel is also vigilant when it comes to Iran’s imperialist ambitions, said Rivlin. Relating to the general chaos in the region, the president said that it is hard to tell who is fighting whom these days. He pointed to fighting forces such as the Kurds, the Iraqis, Jordanians, Syrians, and Turks, who for the most part are fighting on more than one front.When MP Andrew Percy asked whether Israel regarded anything in the deal with Iran to be positive, Rivlin said that Israel is in danger of isolation due to its differences of opinion with the United States, Germany, and other European countries.He made it clear that Israel does not trust the Iranian regime, noting that while Iran remains an ayatollah-led regime, there is little hope for change.Under such circumstances, Israel does not believe that this is the right time for the cancellation of economic sanctions against Iran, particularly as Iran continues to call for the annihilation of Israel and contends that Israel has no right to exist, said Rivlin.Rivlin made a distinction between the Iranian people and their rulers, recalling that up until 1979 Israel had a good cooperative relationship with Iran and that many Israeli companies worked there.Rivlin stressed, as he has many times before, that Israel has no war with Islam. “We have a war with fundamentalism,” he said, adding that fundamentalists sometimes use incitement against Islam as a tool against Israel.Regardless of the differences that Israel has with the US and Germany on matters related to the Iranian deal, Rivlin underscored that Israel knows that both the US and Germany are committed to Israel’s safety.When MP John Howell asked Rivlin what should be done to reduce tensions in Gaza, the president replied that every effort should be made to rebuild Gaza, but without allowing Hamas to hold the people of Gaza hostage.He also stressed the importance of stopping Hamas from building tunnels that reach kibbutzim.