Could Barak testify against Netanyahu in the Knesset?

MK Omer Bar-Lev (Zionist Union) said an emergency meeting of the Subcommittee on Intelligence with Barak is necessary. 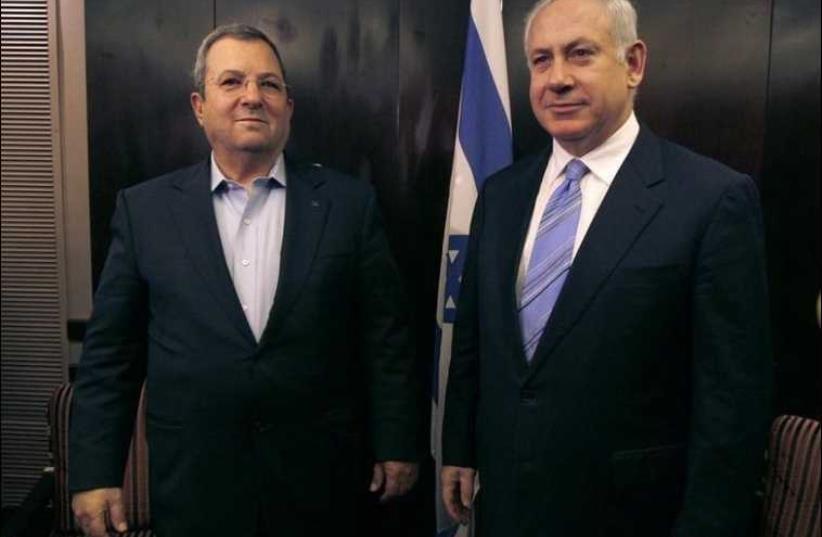 Former prime minister Ehud Barak and Prime Minister Benjamin Netanyahu [File]
(photo credit: REUTERS)
Advertisement
Former prime minister Ehud Barak should address the Knesset Foreign Affairs and Defense Committee after hinting that Prime Minister Benjamin Netanyahu is damaging national security, several MKs said Thursday.Barak accused Netanyahu of poor judgement and putting political concerns before security. He blasted the prime minister for his handling of the new defense aid package from the US, in a speech to the anti-Netanyahu organization Darkenu Wednesday night. According to Barak, Israel would receive $3.8bn in aid, instead of $4.5bn, because of Netanyahu’s poor relationship with US President Barack Obama, and the aid will be conditional on not asking Congress for additional funds. Barak criticized Netanyahu for not taking advantage of the world powers’ deal with Iran to get better aid terms from the US.Barak would be willing to speak to a classified Foreign Affairs and Defense Subcommittee about the ways he thinks Netanyahu is harming national security, but does not want to further discuss the matter publicly, because it could cause damage to the country, Channel 2 reported.Foreign Affairs and Defense Committee chairman Avi Dichter (Likud) said he will consider holding a meeting “once it is clear if this is just thunder and lightning or if there is really rain.”Dichter responded to Barak’s criticism, saying that aid negotiations with the US isn’t like gambling at a casino; rather it is a process that Netanyahu has been leading for years in order to put together an optimal package for the next decade.“Anything said by real experts or experts in their own eyes that they would do better as prime minister show, in the best case, an obsession with power, and in the worst case, depression,” Dichter added. “A regular person, and even more so a former prime minister and defense minister, who think they have information on strategic harm to national security, should give the information to me, the head of the Foreign Affairs and Defense Minister, and not present it as riddles to the public.”Dichter added that Barak has his phone number, and he’s used it for less important matters, so he should use it now, as well.MK Omer Bar-Lev (Zionist Union) said an emergency meeting of the Subcommittee on Intelligence with Barak is necessary.“The discussion of strategic threats does not need to happen on stages with microphones; it must take place around the table of the Knesset’s classified committees,” Bar-Lev said. “My responsibility as an elected official is to protect the security of Israeli citizens. I expect that MK Dichter will call the meeting and invite Barak as soon as possible.”Barak, Netanyahu, Dichter and Bar-Lev all served in the elite IDF reconnaissance unit Sayeret Matkal at the same time.Meretz chairwoman Zehava Gal-On also called for a meeting on Barak’s comments.“Barak cast serious aspersions on Netanyahu’s ability to defend Israel’s security interests, and such things cannot be left up in the air. They require an in-depth discussion that cannot be postponed…They cannot be hidden from the public or its representatives,” she stated.Gal-On added that if poor judgment on Netanyahu’s part made Israel less secure, the damage must be minimized as soon as possible and future harm must be avoided.Gil Hoffman contributed to this report.