Court could be used to reach compromise on Shabbat

When there have been past disputes on matters of religion and state, compromises between political parties proved unreachable. 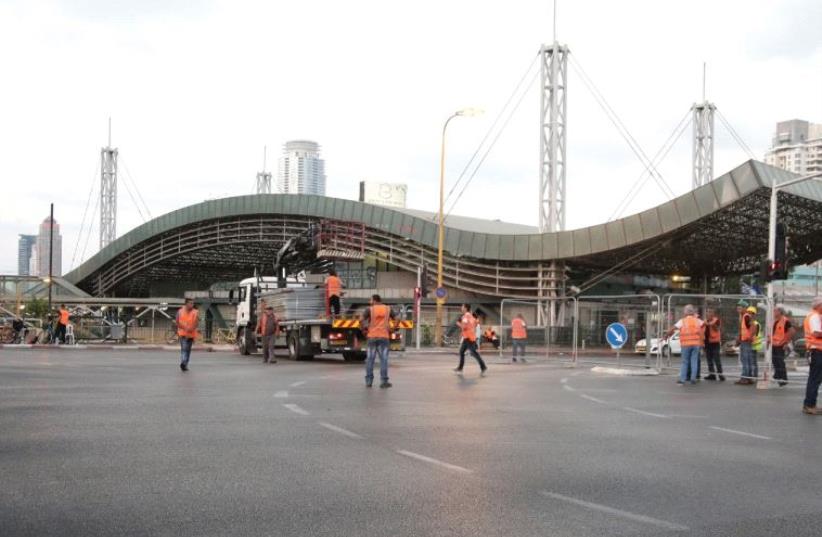 CREWS WORK on expanding the Tel Aviv Railway Station on Shabbat.
(photo credit: ALONI MOR)
Advertisement
It is likely that the state will use a hearing at the High Court of Justice as a means of reaching a compromise with United Torah Judaism on the contentious issue of Israel Railways work on Shabbat, political sources said on Monday.When there have been past disputes on matters of religion and state, compromises between political parties proved unreachable. But when the High Court has intervened, UTJ and Shas have used it as an excuse to back down, blaming a legal system the party has called anti-haredi (ultra-Orthodox).A source close to Netanyahu expressed confidence that a series of compromises could be reached to end the crisis before next Shabbat after there were disputes the last two weekends.A hearing that was set for Monday on a petition filed by Meretz leader Zehava Gal-On was postponed at the request of the state. The High Court said the state must submit a written explanation of its view on the issue by Tuesday.Meretz also gathered collected the requisite 25 signatures from MKs to be able to hold an emergency Knesset meeting during its ongoing summer recess to discuss “the prime minister’s surrender to the haredi factions’ demand on the topic of work on the train on Shabbat.”But Knesset Speaker Yuli Edelstein refused to allow the meeting to be held this week, angering Meretz faction chairman Ilan Gilon. Besides his anger at the meeting not being set for this week, he was also upset that it was set for next Monday, during the Muslim holiday Id al-Adha and in the end the meeting was delayed due to the holiday. “The coalition is trying to avoid a public debate on the issue,” Gilon said. “It cannot be that the Knesset will convene so many days after the prime minister makes a decision without any authority that impacts a huge amount of people while surrendering to extortion due to internal Likud battles.”Joint List MK Ahmed Tibi expressed his frustration on Twitter, saying “What’s the point of an emergency session if it is not done immediately?”Meanwhile, Prime Minister Benjamin Netanyahu decided to give the ceremonial title of acting prime minister while he is abroad starting Tuesday to Tourism Minister Yariv Levin.The law requires the cabinet to appoint an interim prime minister when the prime minister is out of the country in case he cannot be reached while Netanyahu is in the Netherlands.The ongoing dispute between Netanyahu and Transportation Minister Israel Katz had created a problem over who would be the replacement. Over the past several months, Katz has filled in every time Netanyahu has gone abroad except once, when the prime minister asked Public Security Minister Gilad Erdan to receive the role.The job is traditionally given to a security cabinet minister from the prime minister’s party. Levin is not a member of the security cabinet, so if the security cabinet must convene while Netanyahu is abroad, the prime minister decided to give Finance Minister Moshe Kahlon (Kulanu) the right to convene the security cabinet.Because Netanyahu did not want to give the ceremonial post to Katz, he went against traditional protocol, both by appointing a minister who is not in the security cabinet and by splitting the role with Kahlon, a minister from a different party.