Croatian president to Rivlin: We want to work with Israel

The Croatian president underscored that her country wants to intensify its cooperation at all levels with Israel. 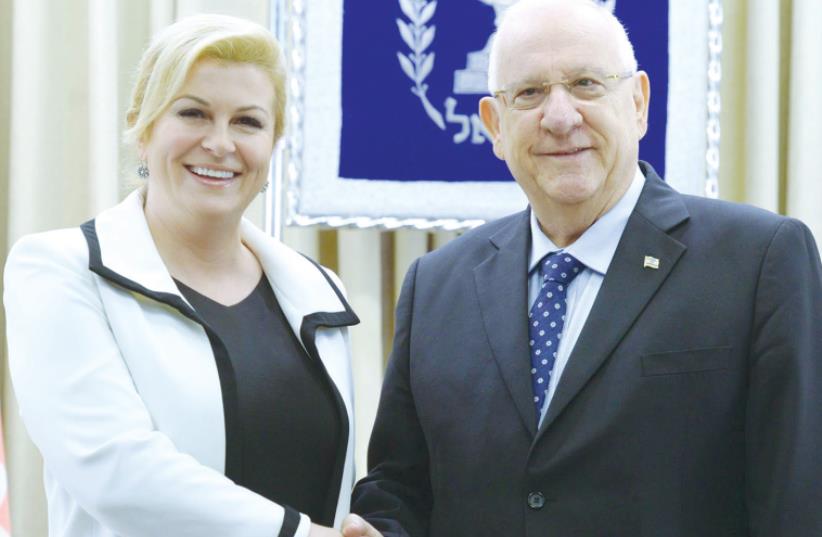 Croatian President Kolinda Grabar-Kitarovic meets with President Reuven Rivlin at his residence yesterday
(photo credit: MARK NEYMAN / GPO)
Advertisement
Croatian President Kolinda Grabar-Kitarovic met with President Reuven Rivlin on Thursday and said she was glad to have the opportunity to pay her first visit to Israel as president.She came to participate in a ceremony at Yad Vashem in which Croatian filmmaker Branko Lustig presented the Oscar that he won for Schindler’s List to Yad Vashem in perpetuity.Grabar-Kitarovic told Rivlin that at the ceremony she had emphasized the importance of carrying the message of peace and tolerance.“I have seen the face of war, and I know what it means to live in peace and security,” she said. Croatia supports a twostate solution, with peace and security for Israel and the Palestinians and an improved quality of life for the Palestinians, she added.Rivlin spoke on the terrorism in the region being sponsored by Iran, saying “Iran threatens Israel, not only through its nuclear program, but by supporting and standing behind terrorist organizations across the region; whether in Yemen, Lebanon, Syria, Gaza or the Sinai peninsula.”Grabar-Kitarovic said Croatia follows events in the Middle East and is concerned about the proliferation of weapons, the loss of human life and the threats that permeate the region.The Croatian president underscored that her country wants to intensify its cooperation at all levels with Israel, including security and defense, declaring that dealing with these matters was a mutual responsibility.In relating to the main reason for his Croatian counterpart’s visit to Israel, Rivlin stressed that the State of Israel “is not a form of compensation for the Holocaust but the homeland for the Jewish people. We returned to our homeland,” he said.Rivlin also stated that Israel is trying to learn from the Croatian experience.