Fleur Hassan-Nahoum, a member of Yerushalmim’s management board, is the new councilwoman to watch for in Jerusalem. 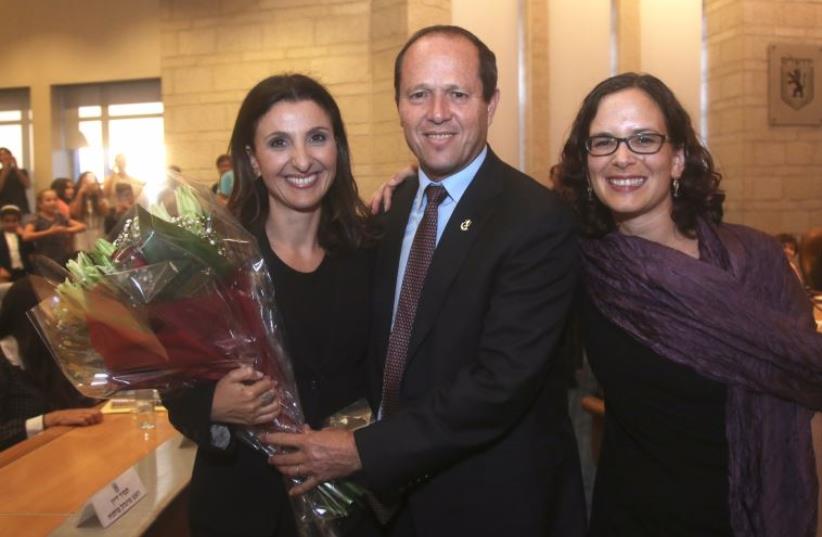 Fleur Hassan-Nahoum (right) with Jerusalem Mayor Nir Barkat and her mentor, Kulanu MK Rachel Azaria at Kikar Safra
(photo credit: MARC ISRAEL SELLEM)
Advertisement
Fleur Hassan-Nahoum, a member of Yerushalmim’s management board, was inducted into the city council on May 31.An advocate of immigrant and women's rights, she is the daughter of the late Sir Joshua Hassan, who was Gibraltar’s first mayor, served four consecutive terms as prime minister, and was a key player in the British colony’s civil rights and self-government movements.In her induction speech, Hassan-Nahoum referred to growing up as the daughter of a politician and being well aware of the “difficulties” and “sacrifice” that such a position entails. She recounted how she made aliya in 2001 with her husband, during the terrors of the second intifada, feeling that this was the place to live in freedom as a Jew and of her desire to contribute to building and improving her homeland. A trained lawyer who practiced in London before becoming the Campaign Director of World Jewish Relief, she is founder  (2011) and CEO of an international strategic communications firm, Message Experts.  Her career has seen a six-year stint at the American Jewish Joint Distribution Committee as senior associate in resource development, followed by five years developing international resources. In 2013 she joined Yerushalmim, running for city council when MK Rachel Azaria (former deputy mayor of Jerusalem) was head of the party list. Hassan-Nahoum praised Yerushalmim for including members from across the political and religious spectrum.