Tzipi Hotovely says there is "continuous contact" between Israel and Indonesia, despite the lack of official ties, and Israel is working to improve its relations with Jakarta. 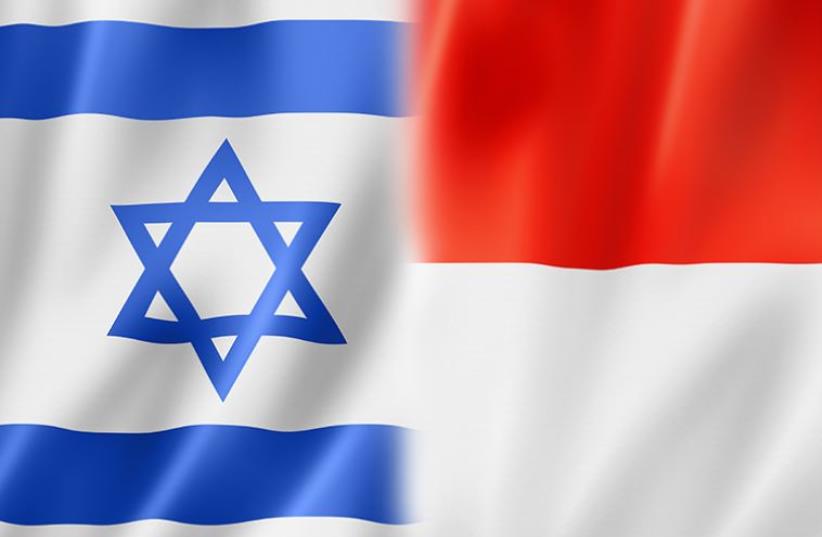 Israeli and Indonesian flags
(photo credit: ING IMAGE/ASAP)
Advertisement
Israel has unofficial diplomatic ties with Indonesia, Deputy Foreign Minister Tzipi Hotovely said, responding Wednesday to a parliamentary question from MK Ahmad Tibi about denying Indonesian Foreign Minister Retno Marsudi entry to the Palestinian Authority.Israel barred Marsudi from visiting her Palestinian counterpart, Riyad al-Malki, in Ramallah and dedicating the first honorary Indonesian consulate in the PA Sunday, because she did not plan to meet with Israeli officials. Tibi (Joint List) asked Hotovely to elaborate on the decision.Hotovely explained that, though Israel and Indonesia, the most populous Muslim nation in the world, do not have formal diplomatic ties, Foreign Ministry deputy director- general in the Asia-Pacific division Mark Sofer recently visited Jakarta.At that meeting, Israeli and Indonesian officials came to an understanding that Marsudi would meet with senior Israeli officials in Jerusalem during her visit to the region.This is the procedure for all foreign officials; they visit Jerusalem and Ramallah, Hotovely explained, and Indonesia is not an exception.“It was the foreign minister of Indonesia’s decision to violate that understanding, and she understood that, by her action of skipping Jerusalem, she is going against the rules Israel set for official visits to the PA and Israel,” Hotovely stated.Hotovely said there is “continuous contact” between the two countries, despite the lack of official ties, and Jerusalem is working to improve its relations with Jakarta.“We’re seeing growth in our ties with Asia like never before, even though the Palestinian Authority and its leaders are doing all they can to prevent the development of these relations,” she said. “Israel-Asia ties are getting stronger and stronger.”Tibi responded that Hotovely’s answer proves that Israel is a “foreign ruler” over the Palestinians.“A country with no ties to Israel, one of the biggest Muslim countries in the world, wants to enter the PA and meet with PA leaders. Why are you involved? [The PA] is a country recognized in the UN; the whole world recognizes it. Maybe this is a situation of foreign rule that must end. Your answer proves what I’m saying,” he said.Hotovely called Tibi’s question a provocation: “We are not a foreign regime. We are here as the legitimate government in the land of the Jewish people, in which there is an Arab minority with equal rights. You represent that minority.”The deputy foreign minister added that diplomatic relations, including those between countries without official ties, are governed by understandings, and when they are blatantly violated that is a breach of the diplomatic code.“The respectable thing to do when there are secret ties, like those between Israel and Indonesia, is to respect the code,” she said. “When you break it, don’t be surprised that you’re preventing yourself from visiting the PA.”Marsudi met with Malki in Jordan, instead of visiting Ramallah.Indonesia recognized Palestinian statehood in 1988, before the Oslo Accords, and PA President Mahmoud Abbas was in Jakarta last week, attending the Organization of Islamic States summit on the stalled Israeli-Palestinian peace process.Indonesia has refused to establish diplomatic ties with Israel until the conflict with the Palestinians has been resolved.Khaled Abu Toameh and Tovah Lazaroff contributed to this report.