A source close to Deri said the Shas leader will not accept an expansion of the relatively small ministry alone, and expects to receive an additional, more senior portfolio. 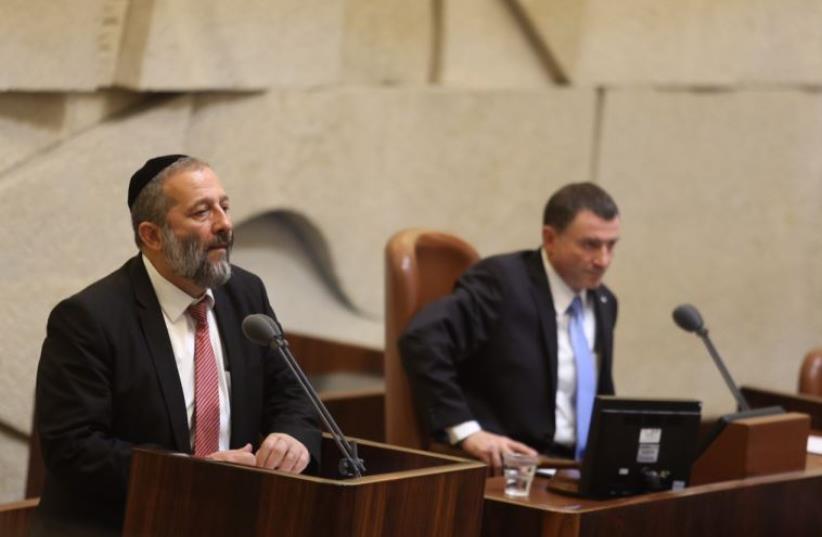 Economy Minister Aryeh Deri (L) speaks to the Knesset as speaker Yuli Edelstein looks on
(photo credit: MARC ISRAEL SELLEM)
Advertisement
Shas chairman Arye Deri is expected to step down from his post as Economy Minister on Sunday, in order to allow the government’s gas plan to move forward.Deri will retain the Negev and Galilee portfolio, which will be expanded to include authority over the “social periphery,” meaning over 200 neighborhoods throughout the country with an extremely low socioeconomic ranking.The budget for Deri’s ministry will triple from NIS 150m. to NIS 450m.A source close to Deri said the Shas leader will not accept an expansion of the relatively small ministry alone, and expects to receive an additional, more senior portfolio.“In the end, Shas will be like Bayit Yehudi. They have almost the same number of seats [seven for Shas, eight for Bayit Yehudi] and Bayit Yehudi has three big portfolios [Education, Justice, and Agriculture] with big budgets and a lot of authority,” the source explained. “Shas will be left with two small ministries, the expanded Negev and Galilee, and Religious Affairs. It won’t stay like that.”Deri and Prime Minister Benjamin Netanyahu began negotiating what the additional ministry will be, and the source says they will come to a decision in “not many weeks.”The Shas minister’s departure from the Economy Ministry will allow the gas outline, which was approved by the cabinet in July, to be implemented, because Deri refuses to invoke Article 52 of the 1988 Restrictive Trade Practices Law (the Antitrust Law), which allows an economy minister to circumvent the objections of an antitrust commissioner in matters of foreign relations or national security.Deri has pointed out that the article had never been invoked before and that he did not want to set that precedent, asking that his authority to use it be transferred to the entire cabinet.Former antitrust commissioner David Gilo’s resignation from the post went into effect September 1, but no new commissioner has been chosen who could authorize or reject the plan.Meanwhile, because Finance Minister Moshe Kahlon, Construction Minister Yoav Galant, and Welfare Minister Haim Katz all claimed conflicts of interest – though Knesset legal adviser Eyal Yinon said the kinds of conflicts of interest that apply to the cabinet do not apply in the same way to the Knesset – the 61-seat coalition was unable to get the majority in the legislature necessary to approve the transfer of authority from Deri to the cabinet.Had Kahlon and Katz used the “mini-Norwegian law,” which allows ministers to resign from the Knesset and be replaced by the next person on the party’s list, but return to be an MK if they are fired from the cabinet, the coalition would have been more likely to be able to get a majority in the Knesset for transferring Deri’s authority.However, when Deri suggested that solution, Kahlon rejected it.