“Druse have done a lot more for the state than many Jews,” says Druse and Circassian leader

Druse and Circassian municipal mayors as well as a deputy minister protested outside the Finance Ministry and Prime Minsiter’s Office Sunday. 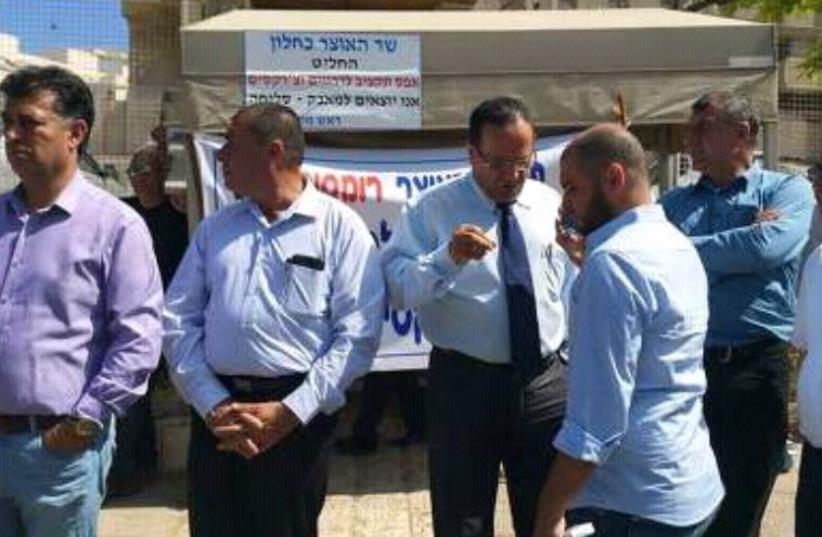 Druse protest in Jerusalem
(photo credit: Ariel Ben Solomon)
Advertisement
Druse and Circassian mayors and a deputy minister protested outside the Finance Ministry and Prime Minister’s Office in Jerusalem on Sunday because of a decision by Finance Minister Moshe Kahlon to postpone a vote in the cabinet on a five-year development plan for these communities.“The new finance minister decided to break his commitment toward us,” said Druse and Circassian Local Councils Forum head Jaber Hamoud, referring to the NIS 2.3 billion plan.The Druse have sacrificed for the state in Israel’s wars and have even “done a lot more for the state than many Jews,” Hamoud said in an interview with The Jerusalem Post after the protest.“We have many difficulties, we don’t have food for our children,” complained Hamoud, adding that the situation for Druse soldiers after they leave the army is poor.“Enough of this nonsense!” he said.“We demand something from the government in return such as functioning sewage, education, and basic living needs.”“If the government does not support the Druse and give us the minimum amount [of funds], we call on Ayoub Kara to resign immediately,” he said, referring to the Druse deputy regional cooperation minister who is the government official responsible for the development of Druse and Circassian communities.Kara (Likud) attended the protest even though he is part of the government.“The reforms and policies planned by the finance minister will be delayed just like the plan to develop Druse villages was postponed today,” Kara threatened at the demonstration.This postponement seriously hurts the credibility of the government, he added.Kara announced to Kahlon that there will be no compromise or reduction in the plan as it was submitted and approved by the municipalities.Professional bodies worked on the plan for a year and it was reviewed by all relevant parties and therefore its postponement is unnecessary, he added.