Erdan: Government must express its sovereignty in Arab neighborhoods of Jerusalem 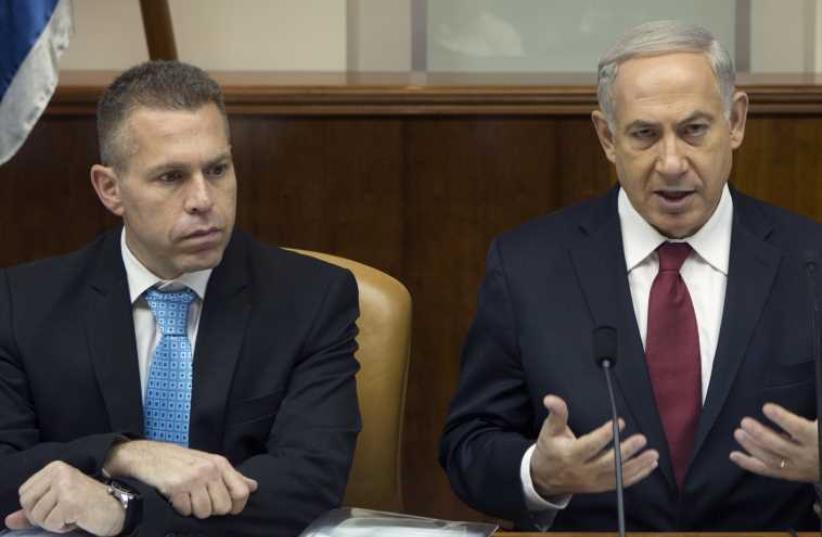 Gilad Erdan and Benjamin Netanyahu
(photo credit: MENAHEM KAHANA / AFP)
Advertisement
Public Security Minister Gilad Erdan called Monday for the public to be calm, speaking at a Knesset Interior Committee meeting on the security situation in Jerusalem, in which he described his efforts to quell the current wave of violence.“There is no security in Jerusalem,” Interior Committee chairman David Amsalem (Likud) said. “This isn’t a time for bar mitzva speeches. We need action, not talk.”Erdan explained that “neither side is going to disappear, and we can only live here with coexistence.”“For years, Israeli governments did not show sovereignty in places like Shuafat. That will not only be fixed by police enforcing laws – sovereignty must be shown in all areas,” he said.Some of the deterrents Erdan said the government is using are house demolitions and taking away citizenship and residency from terrorists.“A terrorist cannot continue enjoying [state] benefits. The judiciary already supported moves like this,” he explained.Erdan also said Arab MKs provoke violence by lying and presenting events in an extreme light.Acting Israel Police commissioner Asst.-Ch. Benzi Sau said the Shin Bet and police are working with greater cooperation than before, even creating an integrated intelligence desk and an integrated investigations desk.“When you have good intelligence, you can make arrests without force,” he explained.“We try to take as much preventative action as possible and have stopped many who intended to attack.”Such intelligence can be used to avoid steps that could be seen as collective punishment, like limiting east Jerusalem Arabs’ freedom of movement, Sau said.“We clarified the openfire instructions, but did not change them,” he stated.“This is a democratic state and we do not open fire on protesters, even if they are unruly. Rules of engagement are only for life-endangering situations, like if a firebomb is thrown at a moving vehicle.”Sau also said that police officers from around the country were brought to Jerusalem, even though that weakened law enforcement outside of the capital.In addition, the police has asked for 1,400 Border Police reservists to be called up. The Knesset Foreign Affairs and Defense Committee will vote on the request on Wednesday.“We have arrested more than 300 rock throwers and are working on indictments, to create a deterrent. We’re concerned that over half [of the rock-throwers arrested] are minors, and many are under 12 and cannot be punished,” Sau said.Sau also updated the Interior Committee on the situation on the Temple Mount, saying that the police avoids al-Aksa Mosque, even though young men often throw rocks and fireworks at police from within the mosque.Young militants barricading themselves in the mosque with weapons, despite the Wakf asking them not to, is the reason the police has, on some days, limited the age of Muslim worshipers who can enter the Temple Mount, Sau said.“Events in the streets of the Old City required us to increase police units and check more of the people passing by and to install metal detectors, which are a good deterrent,” he stated.Sau also mentioned that the police is working to stop potentially dangerous rightwing extremists, and that 34 Jewish residents of the West Bank are banned from the Temple Mount.His comment sparked the anger of MKs Bezalel Smotrich (Bayit Yehudi) and Miki Zohar (Likud).“You don’t have to justify law enforcement against Arabs by saying you arrest Jews,” Zohar said.“There is Jewish terrorism,” MK Taleb Abu Arrar (Joint List) shouted in response.Zohar also said that “anyone wielding a knife or rock should be killed on the spot, or it won’t stop.”MK Tamar Zandberg (Meretz) said that taking such action would not only mean civilians taking the law into their own hands, it is giving the death penalty without a trial.“We need to bring sanity back to Jerusalem,” MK Erel Margalit (Zionist Union), a resident of the capital, implored, mentioning that he has three daughters in the city. “A lot of what Arab MKs’ say is viewed as a provocation, and we don’t need Smotrich or [Education Minister Naftali] Bennett turning Jerusalem into Hebron...This is our capital!” MK Jamal Zahalka (Joint List) said Netanyahu is pouring fuel on the flames of violence, for which “there is no solution through force; the only solution is ending the occupation.“From the days of the Crusaders until recent weeks, the [Al-Aksa] Mosque has never been closed. That’s what angers Muslims,” he said.When Zahalka claimed that members of his party are “leading a legitimate, political, non-violent struggle,” other MKs began to shout at him, and then he accused them of being violent.Zahalka would not stop speaking and arguing, even when his time was up, and was escorted from the committee room, all the while shouting: “We never called for violence! You are the violent ones! We want peace!” Also Monday, the Knesset passed in a first reading on two bills to stiffen penalties for rock-throwing. The first would make the minimum prison sentence for dangerous rock-throwing, such as at moving cars, four years. The other allows a judge to both fine parents of a minor caught throwing rocks and take away their National Insurance Institute benefits for as long as the minor is in prison.Earlier, the Knesset Law, Constitution and Justice Committee discussed the Bill to Fight Terrorism, which is more than 100 pages long and offers various solutions for law enforcement.Deputy Attorney-General Raz Nizri explained that “the proposal gives more efficient tools to law enforcement and security branches to deal with terrorism. We need the legal tools to deal with the new, different terrorism.”A Shin Bet representative said that the law that it works under today is 50 years obsolete.In addition, he said the bill would allow stabbing and rock-throwing to be treated as terrorism and not just a crime.MK Anat Berko (Likud) expressed concern that the bill does not deal with online incitement to terrorism.MK Dov Hanin (Joint List) said that the idea behind the bill is wrong, and that “there are too many laws to fight terrorism, not too little.”