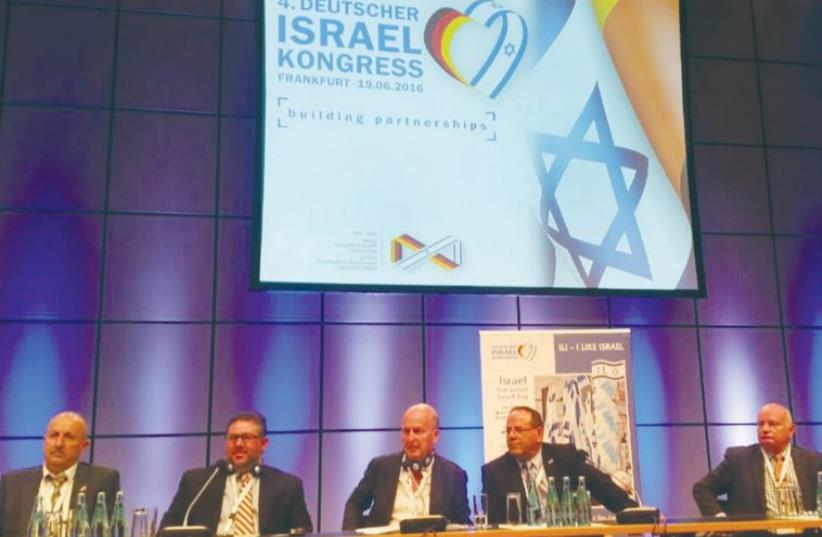 AYOUB KARA (second left), the deputy regional cooperation minister, attends the German Israel Congress in Frankfurt yesterday.
(photo credit: Courtesy)
Advertisement
More than 3,000 supporters of Israel attended a pro-Israel event in Frankfurt on Sunday, sending a message to European foreign ministers who were expected to endorse a French diplomatic initiative opposed by Israel in Brussels the next day.Billed as the largest pro-Israel event of its type in Europe, the fourth German Israel Congress marked the close of the year of celebrations commemorating 50 years of diplomatic relations between Germany and Israel.The event was the initiative of the Israel Allies Foundation, the umbrella organization of pro-Israel caucuses in 35 parliaments around the world, and I Like Israel, an umbrella organization of pro-Israel groups in Germany.“This conference is taking place under the shadow of a damaging peace initiative that aims to pressure Israel to make irrational concessions and force Israel to give up its sovereignty in the name of a false peace,” Israel Allies Foundation Executive Vice President Josh Reinstein told attendees.“They believe by feeding Israel to the crocodiles they will be eaten last. This conference is our answer to that initiative.”Yisrael Beytenu faction chairman Robert Ilatov, who heads the Knesset Christian Allies Caucus, attributed the French initiative and its support in Europe to historic anti-Semitism that has deep roots on the continent.“We don’t understand why our friends in Western Europe create double-standards for Israel,” Ilatov told the crowd. “We don’t understand why they are attacking Israel and not countries in the Middle East that do not protect human rights and protect religious freedom.”By contrast, former defense dminister Shaul Mofaz, who was the keynote speaker at the event, said that although he believes in direct negotiations between Israel and the Palestinians and not an internationally imposed solution, he still welcomed the French initiative.“Israel should not ignore attempts to encourage negotiations,” Mofaz said. “We should not be afraid to discuss and have dialogue on the Palestinian issue. We need to be open to any attempt that will lead to dialogue.”Zionist Union MK Nachman Shai, who heads the Israel-Germany Friendship Caucus in the Knesset, said Germany is Israel’s second-most important ally after the US. He praised German banks for cracking down on the Boycott Divest and Sanctions movement.Prime Minister Benjamin Netanyahu and President Reuven Rivlin sent taped messages to the event that steered clear of politics. Netanyahu spoke of the “shared history with great tragedy” of Israel and Germany and their desire to see a common future.“We must all stand united and strong against discrimination and hatred,” Rivlin said.“I know it’s not easy to be a Zionist. I want to thank you for standing strong for Israel. Together we will overcome any challenge.”Other key partners in the event included the German-Israeli Society, the Israeli Embassy, the Central Council of Jews in Germany, the German Coordinating Council of Societies for Christian-Jewish Cooperation, the Economic and Trade Mission of the State of Israel and the American Jewish Committee.“The potential of German-Israel cooperation and friendship – even after 50 years of diplomatic relations – has by far not reached its potential,” said I Like Israel chairman Sacha Stawski.“We are honored to welcome ministers, members of Knesset, high level experts and personalities from Israel, Germany, the US and elsewhere to this year’s congress. This year’s congress will truly lead the way to building new partnerships between Germany and Israel.”Stawski said he was glad some 200 supporting organizations, close to 60 exhibitors and participants from across Europe participated.Andras Patkai, the Israel Allies Foundation’s European director, said the event displayed the mutual understanding and empathy of the complex challenges Israel and Germany currently face.“At a time when Europe is under external pressure from the humanitarian crisis of trying to handle further waves of asylum-seekers from the Middle East, and the resulting internal pressure from the rise of violent hate groups as well as the political and economic consequences of the imminent British referendum on whether to stay in the EU or leave, Jewish communities throughout the continent are rightly concerned,” Patkai said. “This is a time when leaders need to act and the German Israel Congress is a great show of strength and acceptance, celebrating the enormous value Israeli relations have brought to German society.”