A spokesman at the Foreign Ministry in Jerusalem confirmed that the Indian prime minister will be arriving in early July. 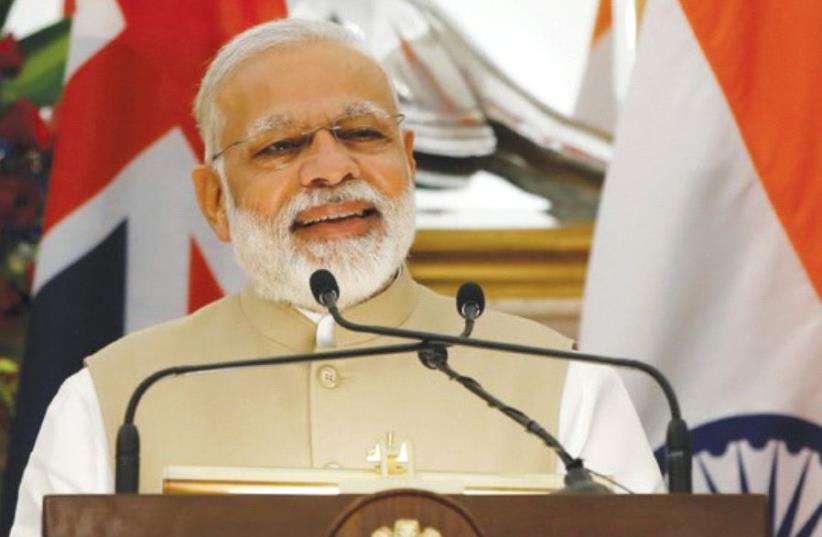 INDIAN PRIME MINISTER Narendra Modi speaks at Hyderabad House in New Delhi
(photo credit: REUTERS)
Advertisement
Indian Prime Minister Narendra Modi’s long-awaited visit to Israel will take place on July 5-6, the Indian press reported on Thursday.According to the Hindustan Times, Modi will come to Israel – a first-ever visit by an India prime minister – on his way to take part in the G-20 Summit in Hamburg on July 7-8.The paper reported that G. Mohan Kumar, India’s defense secretary – which is the equivalent in Israel to the Defense Ministry’s director-general – will visit as well in late April, for a working group meeting on military cooperation that will help prepare for Modi’s visit.Modi’s National Security Adviser Ajit Doval visited last month for two days, to lay the groundwork for the Indian premier’s trip.A spokesman at the Foreign Ministry in Jerusalem confirmed that the Indian prime minister will be arriving in early July.Although the final itinerary has not yet been set, Modi – in a break from previous high profile visits to Israel by senior Indian officials – is not expected to visit the Palestinian Authority. Nevertheless, PA President Mahmoud Abbas is scheduled to travel to India at the beginning of next month.On Tuesday, Modi tweeted a “happy holidays, friends” Passover greeting in Hebrew and transliterated English. Prime Minister Benjamin Netanyahu responded by tweeting, “Thank you, my friend, for your kind holiday greeting. The people of Israel eagerly await your historic visit.”According to the report in the Hindustan Times, “though Israel is among the top four military hardware suppliers to India, with more than $1 billion in annual sales to New Delhi, the Modi government is keen to ensure that this visit is not focused on defense ties alone, but encompasses longterm economic and technological cooperation, resulting in a free-trade agreement.”The paper said that Modi’s visit will “be an open acknowledgment of India’s close ties with Israel, and also pave the way for transfer of high-end agricultural technologies that will benefit Indian farmers.”In February, Modi approved a $2.5 billion missile deal with Israel.