What's happening behind the scenes of Bulgaria's Hezbollah terror trial?

According to the Bulgarian government and US and EU authorities, three Hezbollah operatives blew up an Israeli tour bus in the seaside resort of Burgas on July 18, 2012, killing five Israelis. 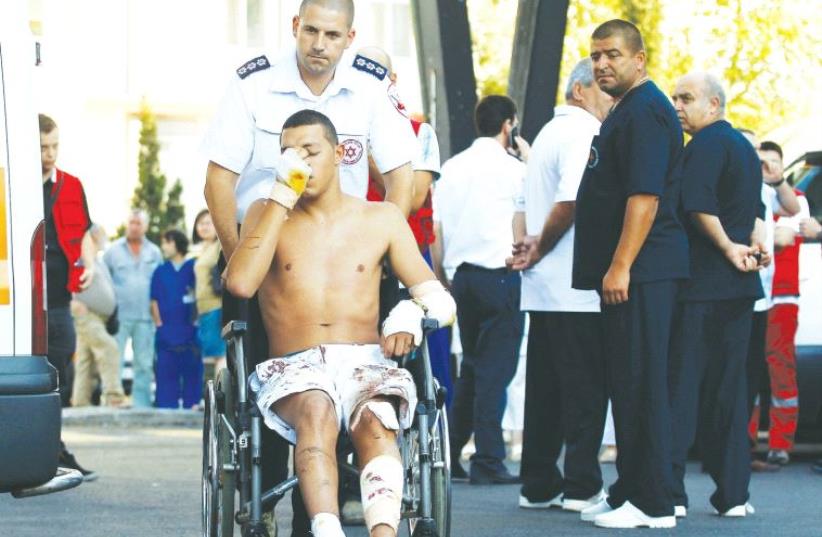 AN ISRAELI SURVIVOR of the Hezbollah bombing at Burgas, Bulgaria, on July 19, 2012, is wheeled to a waiting ambulance as he leaves the hospital.
(photo credit: REUTERS)
Advertisement
Five years have passed since Hezbollah allegedly blew up an Israeli tourist bus in the Bulgarian resort town of Burgas and killed six people, including five Israelis. Nevertheless, the wheels of justice continue to move slowly in Bulgaria as the case drags on in local courts. On the one hand, five years have passed with little to show in terms of justice. On the other hand, Yaki Rand, the lawyer for the victims' families, told The Jerusalem Post that “there is a lot more going on behind the scenes.”According to the Bulgarian government, three Hezbollah operatives blew up an Israeli tour bus in the seaside resort of Burgas on July 18, 2012, killing five Israelis and their Bulgarian bus driver. The bomber, Lebanese-French national Muhammad Hassan El-Husseini, was also killed in the explosion. Two suspects – Lebanese-Australian Meliad Farah and Lebanese-Canadian Hassan El Hajj Hassan – then fled to Lebanon where authorities have ignored Bulgarian extradition requests.Nevertheless, a special terrorism court was established in Sofia and the trial moved ahead in absentia. The Israelis slain were Maor Harush, Itzik Kolangi, Amir Menashe, Elior Price, and Kochava Shriky and her unborn child. The Bulgarian victim was Mustafa Kyosov. The explosion wounded 32 other Israelis.As a result of the large number of witnesses and wounded, the trial has been moving slowly.  According to reports in the Bulgarian press, the court may convene soon to hear Israeli witness testimonies at its Tel Aviv embassy as part of an effort to expedite the proceedings.The postponement of the trial this week was the sixth delay in the high-profile Hezbollah terrorist attack. According to Rand, the trial only really started about a year ago and while he said he has succeeded in bringing the families together, moving the case forward has proven to be a considerable challenge.Whether it is differing agendas, emotional states or different modes of keeping and absorbing evidence, the process has been highly complex.Some victims’ families have only very recently joined the group.When asked about the Hezbollah attack, Milena Petrova, the deputy chief of mission at Bulgaria’s embassy in Tel Aviv, told the Post, “We received a reply [from the Foreign Ministry in Sofia] that Bulgarian judicial authorities are an independent institution and we can neither comment nor make any prognosis about the case. Otherwise it could be considered in a non-favorable light and could have a negative impact on the course of dealing with a particular case.”Bulgaria’s government has changed numerous times since then-interior minister Tsvetlin Yovchev said in 2012: “There are clear signs that say Hezbollah is behind the Burgas bombing.” The shifting governments in Bulgaria – some of which haven leaned more toward Russia – may help explain the slow movement of the trial.Jacob Price, a representative of the families at the ceremony in Bulgaria on Tuesday, said, “Another year has passed since you left us. We have gathered here missing you. There is no end to the deep sorrow in honoring your memory. You remain in our hearts always.“The Bulgarian nation and government have remained true friends of us, the families of the victims, and of the State of Israel... they are doing all they can to preserve this bond of blood,” said Price.Still, he added, “Five years is enough time to understand and debate” the legal issues in order to move on with the trial, especially when for the families “time stopped since you [the deceased victims] breathed your last breath... in that cursed summer of 2012.”Furthermore, Price called on Europe as a whole to “take off the gloves to fight terrorism.”Another representative of the families, Itzhak Shriky, told the Post that even as he eventually moved on, married and had a new daughter, “It was a grave attack... it changed my entire life... everything flipped around 180 degrees.... We continue to live in the shadow of pain.”Israel's Ambassador to Bulgaria Irit Lillian spoke at Tuesday’s remembrance event in Burgas.A verdict convicting the Hezbollah operatives could bring life to the effort in the EU to designate all of Hezbollah’s activities as a terrorist organization. The 2012 terrorist designation only targeted Hezbollah’s so-called “military wing.” The Lebanese militia operates its political operation in Europe, including fund-raising and recruitment efforts.The US Congress in 2016 called on the EU to proscribe all of Hezbollah as a terrorist entity. A recent German intelligence report said 950 Hezbollah members are operating in the Federal Republic.In 2015, a Cypriot court convicted Hezbollah operative Hussein Bassam Abdallah for collecting explosives to use against Israelis. He was sentenced to six years in prison.In 2013, Taleb Yaacoub, a dual Lebanese-Swedish national and a Hezbollah operative, was convicted in Cyprus for plotting to murder Israelis. A Cypriot court sentenced Yaacoub to four years in prison.