"He'll be fair, as opposed to Obama, whose policy leaned always towards the Arabs." 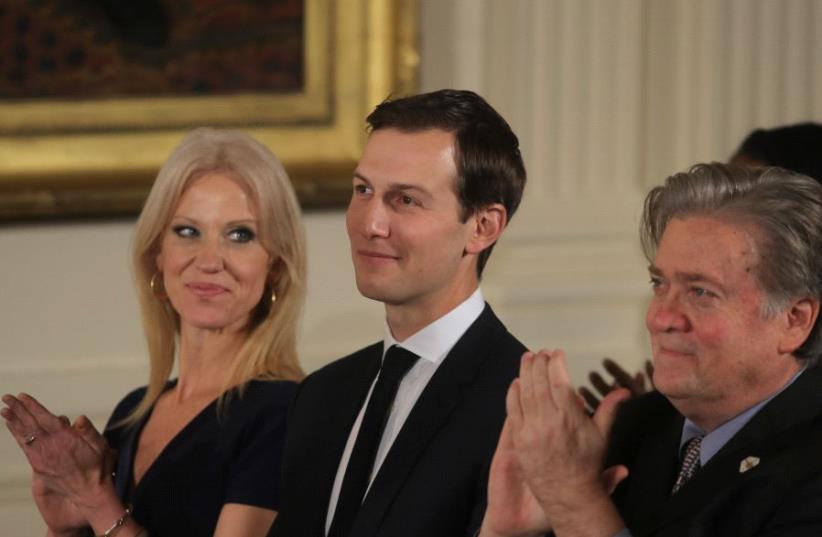 Senior staff at the White House Kellyanne Conway, Jared Kushner and Steve Bannon (L-R) applaud before being sworn in by Vice President Mike Pence in Washington, DC January 22, 2017.
(photo credit: REUTERS)
Advertisement
BET EL, West Bank - For many in the Israeli settlement of Bet El, deep in the West Bank, Donald Trump's choice of Jared Kushner as his senior adviser on the Middle East is a sign of politics shifting in their favor.They regard Kushner, whose family's charitable foundation has donated tens of thousands of dollars to their settlement, as part of a diplomatic re-balancing after what they view as eight years of anti-Israel bias under the US administration of Barack Obama."He will stand up for our interests. I suppose he will lean in our favor," said Avi Lavi, 46, who has lived in Bet El for more than 40 years. "He'll be fair, as opposed to Obama, whose policy leaned always towards the Arabs."New US President Trump says his son-in-law Kushner, 36, is capable of brokering the "ultimate deal" to deliver peace between Israelis and Palestinians.Roi Margalit, manager of the Bet El Yeshiva, a seminary complex with around 400 students, said Kushner, an Orthodox Jewish father of three, understood the position of Israeli settlers better than previous envoys."At least now we have someone who knows us," the 43-year-old added. "He will now have to study the other side (the Palestinians) and see if there is any common ground."Trump's pick for Israeli ambassador has sparked particular enthusiasm in the community: David Friedman, who chairs the American Friends of Bet El Institutions fundraising group.The White House did not immediately respond to requests for comment from Kushner and Friedman.Kushner, a businessman who built his career on real estate and publishing, has said little about his views about one of the world's most intractable conflicts, either during the campaign or since Trump took office.The big question for the Palestinians is whether he can be an impartial actor given his family foundation's past financial ties to Bet El.Palestinian President Mahmoud Abbas has been careful to say he looks forward to working with the Trump administration, but others are less optimistic.Wasel Abu Youssef, a senior official at the Palestine Liberation Organization, the main Palestinian political umbrella body, said Kushner could not be a neutral envoy if he was supportive of Israeli settlements.Hani al-Masri, a political scientist and director of the Palestinian Center for Policy Research and Strategic Studies, said Kushner would be a representative of Israel rather than of the United States."If he attempts to resume negotiations, he will seek to hold them at a lower level than previous negotiations. It will be more biased to the Israeli position in an era where Israel is more extreme."

Palestinians want the West Bank and Gaza Strip for an independent state, with its capital in east Jerusalem.Most countries consider the settlements illegal and an obstacle to peace. Israel disagrees, citing biblical, historical and political connections to the land and security interests.Bet El, a community of 1,300 families perched on a hillside where many believe God promised Jacob the land, has been financed in part by donations from American backers.Among its donors have been the Donald J. Trump Foundation, which gave $10,000 in 2003, and the foundation of Charles and Seryl Kushner, the parents of Jared, which gave $38,000 in 2013, US tax records show.The New York-based American Friends of Bet El Institutions hosts dinners to raise funds for the settlement, which overlooks the Palestinian city Ramallah.Kushner has left it up to his father-in-law to comment on what role he might play."Jared is such a good kid and he'll make a deal with Israel that no one else can," Trump told The Times of London newspaper last month. "He's a natural deal-maker - everyone likes him."Middle East analysts say the settlement donations by Kushner's family foundation are not necessarily deal-breakers.After decades of failed negotiations, the real test is whether he is prepared to rethink the way the Middle East peace process is conducted, said Hugh Lovatt, a fellow of the European Council on Foreign Relations."If he reverts to pushing for a process for the sake of process and diplomatic prestige, then he will prove no more successful than his predecessors," Lovatt told Reuters."If he acquiesces to Israeli territorial demands and gives a green light to more settlement activity, he could even do irreparable damage to the prospects of long-term peace."A key diplomatic factor will be whether the Trump administration commits itself to a two-state solution - Israel and an independent Palestinian state living side-by-side.But some of Kushner's supporters in Bet El appear to be heading in a different direction - and the political voice of hardliners could prove a significant obstacle should peace talks resume."The two-state solution is a scam," said Shai Alon, the head of the local council, who describes himself as optimistic about the "Trump era.""It's not going to happen."