Meretz MK calls for A-G to investigate group that made video. 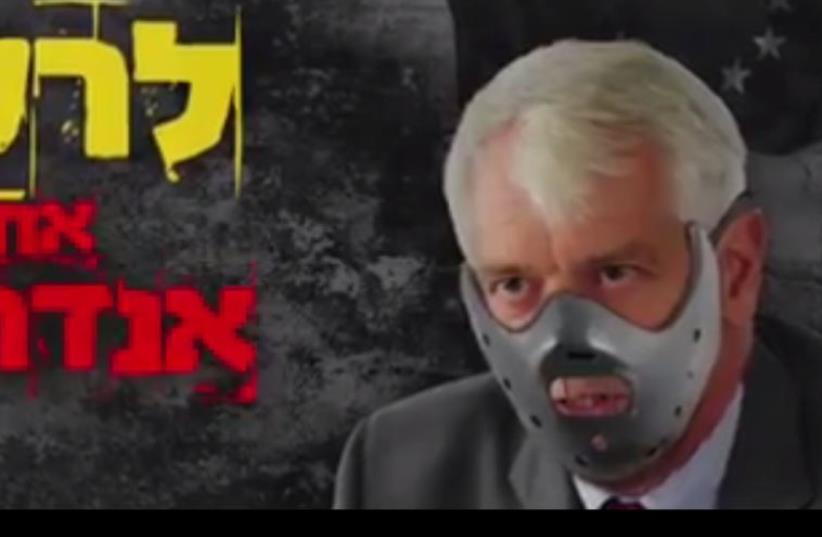 EU Ambassador to Israel Lars Faaborg-Andersen's face is muzzled in video of right-wing group.
(photo credit: screenshot)
Advertisement
The Foreign Ministry on Sunday night slammed a short video produced by settlers that showed EU Ambassador to Israel Lars Faaborg-Andersen wearing serial killer/cannibal Hannibal Lecter’s muzzle from the horror movie The Silence of the Lambs.The video was posted on the Facebook page of a nongovernmental settler group called Jerusalem’s Periphery Forum, which represents settlements outside Jerusalem, particularly those along Route 1 as it heads down to the Dead Sea.The group has been particularly vocal on the issue of illegal Palestinian and Beduin construction funded by the European Union.On Sunday night, the group charged that Faaborg-Andersen was behind the construction.“He’s the man that stands behind the illegal building around Route 1. He is creating facts on the ground so that there can be contiguous territory for a terrorist state in the future,” the video says in text.“It would be unthinkable for Israeli ambassadors in Europe to create outposts for the refugees. In that same way, we can’t let [Faaborg-]Andersen challenge us by acting in a way that endangers all of us. We have to restrain [Faaborg-]Andersen.”As its last shot, it showed the envoy wearing a mask akin to the one made famous in The Silence of the Lambs.Foreign Ministry director-general Dore Gold said he condemned the disrespectful way Faaborg-Andersen was portrayed.Meretz MK Tamar Zandberg said this kind of “manhunt” could not be legitimized. Her Meretz colleague Michal Rozin asked Attorney-General Avichai Mandelblit to investigate the organization that created the video and uncover its financial backers.Rozin also asked Mandelblit to investigate whether the video was considered incitement and whether the group had received any public funding.