While in the past Israel has had trade delegations in Qatar, Oman, Morocco and Tunisia, diplomatic mission will serve as Israel's first type of formal presence in the UAE. 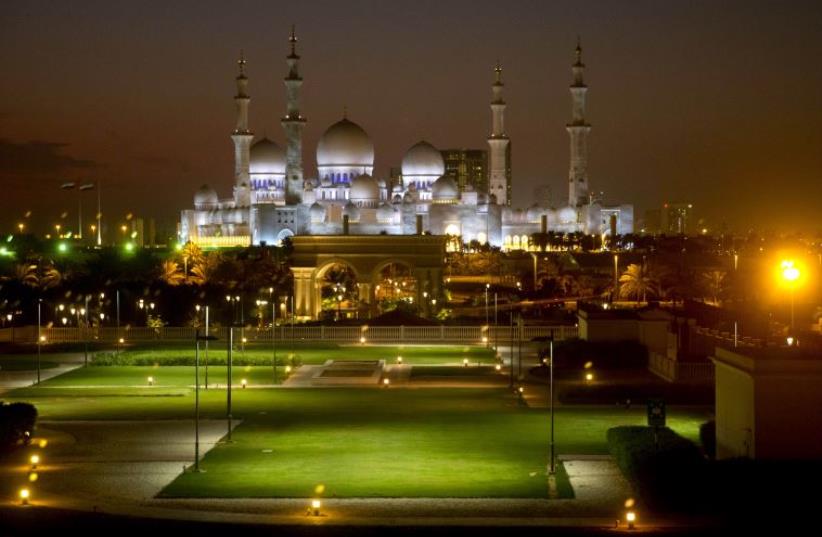 Sheikh Zayed Grand Mosque in Abu Dhabi, United Arab Emirates
(photo credit: REUTERS)
Advertisement
The forthcoming opening of an office in Abu Dhabi accredited to the International Renewable Energy Agency does not signal any upgrade in Israel’s relations with the United Arab Emirates, a UAE government official said on Friday.“Any agreement between IRENA and Israel does not represent any change in the position of the UAE or its relations with Israel,” said Maryam al-Falasi, director of communications at the UAE Foreign Affairs Ministry, according to Gulf News.The Foreign Ministry on Friday confirmed a Haaretz report that Israel will open an office in Abu Dhabi accredited to IRENA, and that Foreign Ministry Director-General Dore Gold was in the United Arab Emirates capital last week taking part in the organization’s biannual meeting and discussing the opening of the Israeli mission.The mission is a representation to IRENA, and not a bilateral embassy to the UAE; it would be similar to a country without diplomatic relations with the United States opening a mission to the UN in New York.However, while in the past Israel has had trade delegations in Qatar, Oman, Morocco and Tunisia, this would be the first time it would have any type of formal presence in the UAE.Falasi counseled against reading too much into the move, saying: “IRENA is an international, independent agency that works according to the laws, regulations and norms that govern the work of such organizations.”She said missions accredited to the organization are “limited to affairs related to their communications and dealings with the agency. They do not, under any circumstances, cover any other activities and do not involve any obligation upon the host country with regards to its diplomatic relations or any other relations.”Nevertheless, the opening of any type of Israeli mission in an Arab country is not void of significance, especially coming at a time when both Prime Minister Benjamin Netanyahu and Gold have spoken about a unique confluence of interests between Israel and the moderate Arab states who are facing similar threats: Iran and radical Islam.Netanyahu has obliquely referred, on many occasions in the past, to the discrete contact Israel has with numerous Arab countries, including the Persian Gulf states.In June, just prior to when Gold took over his position at the Foreign Ministry, he met publicly at the Washington office of the Council on Foreign Relations with a retired major-general in the Saudi armed forces, Anwar Eshki, with whom he held talks in the past.Foreign Ministry officials confirmed that Israeli diplomat Rami Hatan will head the delegation to IRENA.IRENA describes itself as an intergovernmental organization – with some 144 full members – that supports countries in their transition to a sustainable energy future. It was created six years ago, and on two occasions since – in 2010 and 2014 – Israeli ministers have attended an IRENA conference in Abu Dhabi.Silvan Shalom, then Israel’s national infrastructure, energy and water minister, attended the conference in 2014 and told The Jerusalem Post at the time that Israel wanted to see a permanent Israeli delegate based in Abu Dhabi as a permanent representative to IRENA.“We would like to have full representation here,” Shalom said at the time. “Every country has a mission with diplomats who live here.When they came to the decision to move the headquarters to Abu Dhabi, they made sure with the authorities that they would give every country the option to be here – to be here not only for the convention but to be here permanently.”Shalom’s visit was the first Israeli delegation visiting the UAE since the assassination of Hamas operative Mahmoud al-Mabhouh on January 19, 2010, in Dubai.That assassination came just days after Shalom’s predecessor, Uzi Landau, became the first Israeli minister to visit the UAE to attend an IRENA conference. Like Abu Dhabi, Dubai is one of the seven emirates that make up the UAE.Following Shalom’s visit, the UAE’s Foreign Minister Anwar Mohammad Gargash made comments similar to what Falasi said on Friday, saying that the “UAE has been able, through a delicate balance, to differentiate between Israel’s membership in IRENA and the normalization of bilateral ties which Israel has been seeking.”