A war of words is under way in Israel's political world. 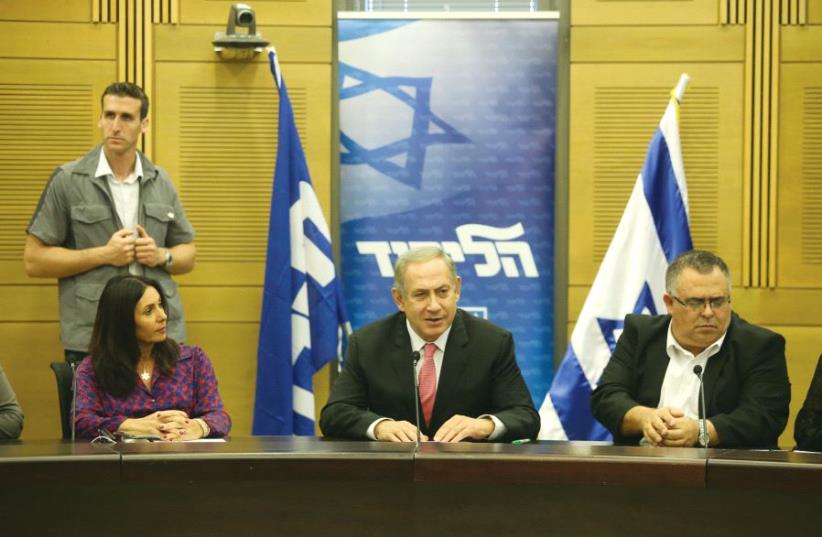 Culture Minister Miri Regev, Prime Minister Netanyahu and MK David Bitan in the Knesset in November
(photo credit: MARC ISRAEL SELLEM)
Advertisement
Former IDF chief Dan Halutz sharply criticized Culture and Sport Minister Miri Regev and coalition chairman David Bitan, both of the Likud, on Monday, accusing them of being subhuman.Halutz was responding to the criticism of Shin Bet (Israel Security Agency) Director Nadav Argaman by Regev and Bitan. Regev called him delusional and Bitan called him a coward after Argaman pushed for removing metal detectors from the entrances to the Temple Mount.Bitan even said that had Argaman led the Shin Bet in 1976, he would have prevented the July 4 Entebbe Operation in Uganda that saved hostages from a hijacked plane.Halutz told Army Radio, “These people simply don’t understand that they have the ability to say such things because of those they call delusional cowards. Darwin says man evolved from monkeys. In Israeli public life, there are too many people who haven’t completed the process.”He said such criticism of the Shin Bet will cause problems for the organization that could harm Israeli security.“This discourse causes a lot of operational damage,” Halutz said. “When the Shin Bet doesn’t get support it creates dilemmas for the future on what it will recommend.”Bitan responded by calling Halutz “the IDF’s most failed and arrogant chief of staff” and accused him of racism.“I don’t want to stoop to his level, but he has not internalized that in a democracy, decisions are made by elected officials and not by people like him,” Bitan said. “A man who sold his stock when soldiers were kidnapped [in 2006, sparking the Second Lebanon War] and opposed the development of the Iron Dome missile defense system continues to fail in what he says as he failed in the army.”Regev served as the spokeswoman for the IDF and Halutz during the withdrawal from the Gaza Strip in 2005. Since then, they have gone in very different directions, with Regev joining the Likud and Halutz Kadima.Halutz never ended up running for Knesset. He has been in business since he left the IDF.“Halutz’s arrogance made him run the IDF poorly, and he never knew how to take criticism,” Regev said. “Halutz has joined a long line of people who have called those who think differently from them monkeys and herds of beasts.”