The former IDF generals who formed the non-political movement both insist they are not entering politics. 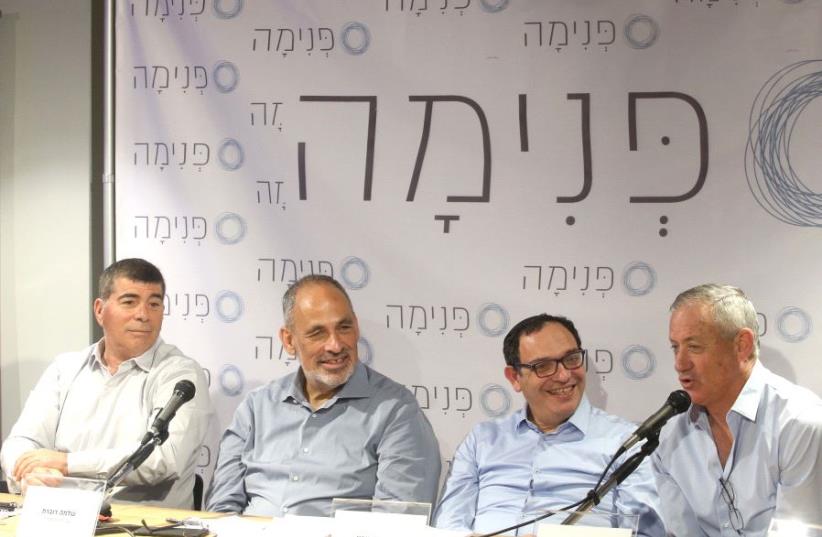 Pnima party conference
(photo credit: MARC ISRAEL SELLEM)
Advertisement
Former IDF chiefs of staff Gabi Ashkenazi and Benny Gantz announced the formation of a nonpolitical movement Monday at a press conference in Lod.The movement, called Pnima (Inward), deals with internal issues inside society and uniting the country’s different sectors.The movement was founded more than a year ago and was profiled in The Jerusalem Post last June, but as one of its founders said, it is only “coming out of the closet” now.Ashkenazi and Gantz have both been rumored as future candidates for prime minister, and are at least expected to play a central role in a party ahead of the next general election.But neither has entered politics yet, and both insisted that they were not entering politics by joining Pnima.“Politics is important, the state is run by political actions, and I hope it will be run well,” Gantz said. “We are not there. We are here. Politicians should stop being gladiators, and the press should stop asking politicians to be gladiators and start looking what’s happening below.”In a Freudian slip, Ashkenazi referred to Pnima as Kadima.But he gave no indication of his political future.“I am here because of what can be done in society,” Ashkenazi said. “I don’t think everything has to be political. The idea of Pnima is that people from across sectors can work together for a goal.”Turning to the reporters, Ashkenazi said: “Ask yourself when was the last time you sat with an Ethiopian immigrant, a settler, a haredi [ultra-Orthodox]. There is no future for this country if we can’t connect sectors.”Pnima includes representatives from all sectors. They have been going together on learning visits to sites in those sectors over the past year.The movement took a poll that found massive rifts inside society threaten its future. It found that members of different sectors have never met anyone in others. For instance, half of Israeli Jews admitted they do not know an Ethiopian immigrant personally, 33.6% of them do not know anyone haredi, 38.5% do not know a settler, and 51.1% of Israeli Arabs said they do not know personally a right-wing Israeli Jew.Pnima leaders said the lack of familiarity with other sectors has resulted in other figures that demonstrate the rifts in society, such as 60% of Israeli Jews believe haredim take advantage of the state, 42.8% of Israeli Jews believe Arabs are scary, and 24.3% believe Ethiopian immigrants are primitive.The poll, of 1,100 respondents representing a sample of Israeli society, was conducted by Midgam in January.Former education minister Shai Piron, who founded the movement, called upon the public to join a 13-month journey ahead of Israel’s 70th birthday to bring people together in discourse in building the country’s vision.“Pnima is a movement of leaders with experience in every possible field,” Piron said. “People are here despite politics. I didn’t come here to advance anyone politically or harm them politically.”Rabbi Betzalel Cohen, who heads a haredi yeshiva high school in Jerusalem, said haredim need to remember “Israel is one nation with different tribes, every tribe has its role, and we haredim have responsibility for this country.”Faten El-Zinati, an Arab woman who heads a multicultural center in Lod admitted it is hard to be an Arab in a forum that was mostly Jewish but she believes Pnima can succeed in bridging gaps between sectors.“When people say there is no chance, I say that because of my kids, I have to keep believing,” she said. “I don’t know what will come out of this, but I believe in people and whoever can bring a little hope, I’m in favor.”Socioeconomic leader Adi Altschuler said her concern about where Israeli society is going keeps her up at night.“I ask does a leader have to be only an MK?” she asked. “From my activity at the bottom [of society], I’ve decided that no. It might sound like a cliché, but I think Pnima will work, so don’t be cynical.”The founders of Pnima also include mayors Shimon Lankri of Acre, Michael Biton of Yeroham, and Sigal Moran of Bnei Shimon Regional Council; biblical scholar Micha Goodman; hi-tech businessman Shlomo Dovrat; Chili Tropper, who heads the Education Department in Yeroham; and Sara Rosenfeld, mother of terrorism victim Malachi Rosenfeld, and a resident of Kochav Hashahar in the Binyamin region.