Nicolae Ceausescu, whom Barak compared to Netanyahu, lead the Communist regime in Romania from the death of his predecessor in 1965 until his own death with his wife Elena in 1989. 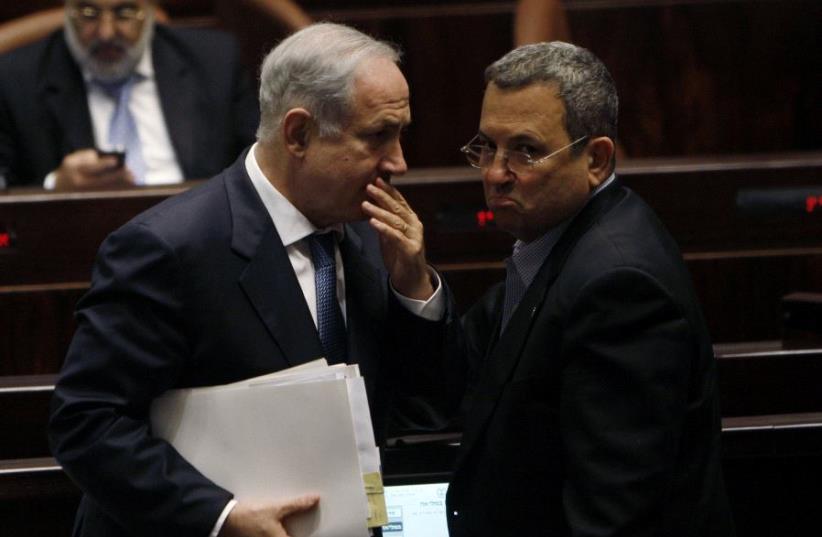 Israel's Prime Minister Benjamin Netanyahu (L) speaks with Ehud Barak at the Knesset, the Israeli parliament, in Jerusalem June 8, 2009.
(photo credit: REUTERS)
Advertisement
Former Prime Minister Ehud Barak continued his pointed attacks on Prime Minister Benjamin Netanyahu on Sunday, accusing him of “moral collapse.”“Netanyahu’s moral collapse gives way to laws whose only purpose is to help the prime minister escape criticism of bribery, fraud and breaches of trust which he is suspected of,” said Barak who was speaking at an event in Tel Aviv. “The law blocking police recommendations, the law avoiding publication of the reasons for closing the cases, the French law, and the tax relief law are all ugly disruptions sewn in imbalances of the principles of equality in the eyes of the law.”“This is an expression of a deterioration in values that deals not with the welfare of the citizens, but rather with the worship of a supposedly corrupt leader,” Barak said.“Our story reminds us of Elena and Nicolae Ceaușescu more than the society of excellence and light for the ‘goyim’” [nations], he added. “The nation and the citizens that brought Netanyahu up to power are those that will lower him from power that humiliates the nation and its citizens. The power is in the hands of the citizens and they are the ones who will put an end to this shame.”When Barak was asked by the audience whether he supported primaries or any other method in which the center-left candidates would run, and whether he would participate, he responded with a sentence in Arabic that translates to “From your mouth to God.”The Likud released a statement in response to Barak’s remarks, stating that “from day to day, Ehud Barak proves to be eccentric and delusional. His remarks against the Prime Minister Netanyahu are incitement to murder. Barak simply lost it.”Nicolae Ceaușescu, whom Barak compared to Netanyahu, lead the Communist regime in Romania from the death of his predecessor in 1965 until his own execution with his wife Elena in 1989. He was the only Communist leader executed during the fall of the Communist regimes in Eastern Europe at the end of the 20th century.In addition to the harsh and cruel management of the communist countries, Ceaușescu had a lavish life with his family and created a personality cult around himself in Romania. He also worked to cut Romania’s external debt drastically, seriously affecting the standard of living for the country’s residents.After Ceaușescu refused to follow the liberal line in the Soviet Union and after a series of protests and demonstrations, the people took control of Bucharest when security forces joined them. Ceaușescu tried to turn to the people from the balcony of the Central Committee building where he had spoken so many times. However, unlike those past times, the audience refused to listen and defeated the tyrant. Ceaușescu and his wife attempted to escape the capital but were caught, tried, and convicted of genocide within an hour and a half. They were executed by shooting minutes after the trial.This is not the first time Barak has compared Netanyahu to a leader who ended his reign in death. Last June, Barak compared Netanyahu and his wife to France’s King Louis XVI and his wife, Marie Antoinette, who were executed by guillotine for treason in 1793. “When the allegations of corruption and privation came, he said there would be nothing because there is nothing. His wife said that if the people have no bread, let them eat cake. That did not help them on their day of judgment.”Several opposition members expressed disapproval of Barak’s criticism. Zionist Union MK Ayelet Nahmias-Verbin posted on Twitter as a response that “Yitzak and Leah Rabin were called from below their house to be hanged in the city square ‘like Ceaușescu and his wife.” In demonstrations, I took down such signs. It is possible and necessary to oppose Netanyahu without such bad imagery.”

Labor Party MK Miki Rosenthal also posted to Twitter, stating, “Netanyahu is neither Ceaușescu nor a traitor. @Barak_Ehud was wrong in the comparison. He is Netanyahu — and that is enough. A prime minister suspected of bribery, a spreader of hatred, a pathological liar and one responsible for the destruction of the Israeli statehood for his own personal survival.”

JPost.com Staff contributed to this report.