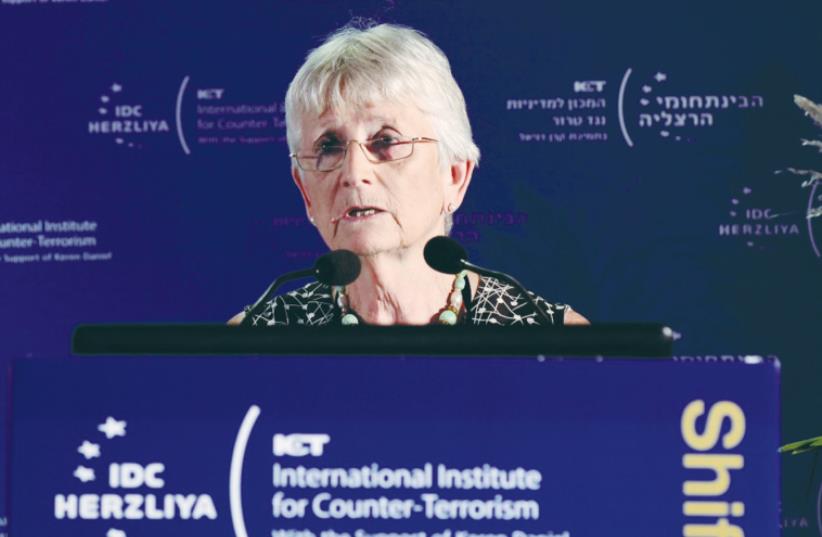 BARONESS PAULINE Neville-Jones from the UK speaks at the International Institute For Counter-Terrorism conference in Herzliya yesterday.
(photo credit: TOMER NEUBERG)
Advertisement
British officials will travel to Syrian refugee camps in the Middle East and choose refugees for relocation to the UK, in accordance with security considerations, the former minister of state for security and counter terrorism, Baroness Pauline Neville- Jones, said on Tuesday during a security conference in Israel.Britain has not given up absolute control over its national borders, Neville-Jones said, speaking at the International Institute For Counter- Terrorism’s 15th international conference at the Interdisciplinary Center Herzliya.To avoid further migration to Europe, Britain will select refugees directly from Middle East camps, she said. Britain will decide who enters its borders, she said, adding that London will act to prevent the formation of a “fifth column” within.Neville-Jones, who served as minister from 2010 to 2011, and is a member of Britain’s Council on Cybersecurity, rejected any claim hat Britain had failed to act with determination to obtain its security goals.Britain has successfully dealt with terrorism threats, she said, adding that the past decade saw a single terrorism casualty. She cited reforms to professional intelligence and policing techniques as contributing greatly to national security, which enabled British security forces to thwart terrorist plots, instead of waiting for them to occur.Security forces have received greater power of administrative arrest when quality intelligence becomes available.Neville-Jones expressed confidence that Parliament would soon renew its approval for counter-terrorism operations in Syria. She spoke a day after UK Prime Minister David Cameron revealed that the Royal Air Force had carried out a targeted covert air strike on two British Islamic State operatives in Syria, who had been plotting a bomb attack on London.Over 600 Britons have traveled to Syria to join the jihadist organization, the former minister said, adding that the number was lower than other European states, but still a cause for concern.Additionally, she added, al-Qaida’s command and control techniques in Europe have changed, and lone-wolf terrorists have received the authority to carry out localized attacks, which have the potential of becoming mass casualty incidents that can terrorize the population.Islamic State, she added, has become an efficient recruiter of volunteers through social networking, and the age of recruits is decreasing with time.Human intelligence is set to play an increasing role in the war against terrorism, but the fight against the extremist ideology is part of the long-term solution, she argued.“We must be prepared to take difficult decisions,” said Pauline-Jones.