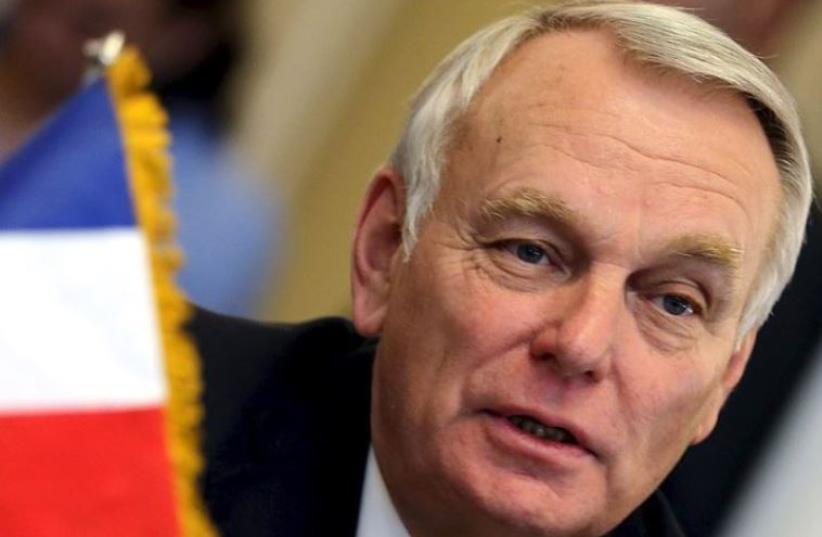 French Foreign Minister Jean-Marc Ayrault
(photo credit: MOHAMED ABD EL GHANY/REUTERS)
Advertisement
French Foreign Minister Jean-Marc Ayrault was set to arrived in Israel Saturday night to update Prime Minister Benjamin Netanyahu and Palestinian Authority President Mahmoud Abbas on a new peace initiative his country plans to launch at the end of this month.The brief visit comes amid a row with Jerusalem over France’s support last month for a UNESCO resolution that denied Jewish ties to the Temple Mount. Ayrault plans to meet with Netanyahu in Jerusalem and Abbas in Ramallah on Sunday morning before departing for China in the afternoon.The Palestinians already have announced their support for the internationalized process, which is to begin with a ministerial meeting of some 20 countries in Paris on May 30 to be followed by a peace conference in the fall. Neither the Israelis or the Palestinians have been invited to the May ministerial meeting.Israel has opposed the process because it believes the best way forward is for the Palestinians to resume face-to-face negotiations. Netanyahu on Thursday publicly reissued an invitation for Abbas to do so, both in his Independence Day address to the diplomatic corps and in a live chat he held on Twitter.“I am willing to meet President Abbas today, right now. He can come to my home here in Jerusalem or I can go to his home here in Ramallah,” Netanyahu said. Foreign Ministry director-general Dore Gold told The Jerusalem Post: “It would be much easier for Abbas to come to Jerusalem to meet Prime Minister Netanyahu, rather than set up this multi-state enterprise in Paris, which I don’t think gets us any closer to a negotiated solution and, in fact, makes a negotiated solution more distant.The Palestinians have insisted that they will not speak to Israel until it agrees to a two-state solution based on the pre-1967 lines and to halt settlement activity, including Jewish building in east Jerusalem. The last round of direct talks broke down in April 2014 and have not been resumed since. The US, which brokered those talks and all past peace efforts has yet to decide whether it will attend the French-led ministerial meeting.On Thursday, US Secretary of State John Kerry spoke by telephone with Abbas about the peace process.“Obviously the main purpose and topic is to continue to reaffirm our desire to see both sides take affirmative steps to get us into a position to create the kind of conditions where a two-state solution can be better pursued,” State Department spokesman John Kirby told reporters in Washington in describing the phone call.When Netanyahu sits down with Ayrault, he will explain Israel’s reasons for opposing the French initiative, as well as its anger over the French support for the UNESCO resolution.Last week, Netanyahu sent French President Francois Hollande a sharply worded letter in which he said: “While we have no illusions regarding the United Nations’ commitment to truth or fairness, we were frankly shocked to witness our French friends raising their hands in favor of his disgraceful decision.“The international validation of Palestinian efforts to deny Jewish history and to perpetuate the myth of Israel’s aggression on the Temple Mount is not only immoral, it is also dangerous,” Netanyahu wrote.Separately, Hollande sent a letter last week to the French Representative Council of Jewish Institutions (CRIF) in which he said that he regrets “the misunderstanding” that had arisen as the result of France’s support for the resolution that was passed by the executive board of the United Nations Educational, Scientific and Cultural Organization (UNESCO) that met in Paris last month.France believes all three religions should have the freedom to access and worship in their holy sites in Jerusalem, Hollande said. The UNESCO vote was meant as a statement of support for maintaining the status quo with regard to the holy sites in Jerusalem, he added.But French Prime Minister Manuel Valls said the vote was a mistake.“This UNESCO resolution contains unfortunate, clumsy, offending formulations it should have been clearly avoided, as well as the vote on the issue,” Valls told parliament last week, according to the European Jewish Press.“I want to repeat once again and clearly, with conviction – France will never deny the Jewish presence and Jewish history in Jerusalem. It would make no sense, it is absurd to deny this history,” Valls added.