Friends or foes? A brief history of Liberman and Netanyahu’s mutual animosity 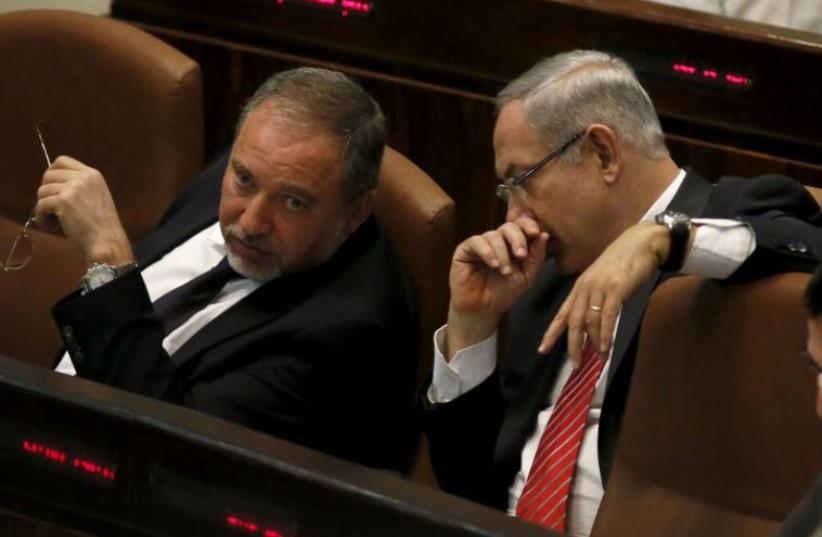 Prime Minister Benjamin Netanyahu (R) confers with Yisrael Beytenu chief Avigdor Liberman in the Knesset
(photo credit: AFP PHOTO)
Advertisement
Prime Minister Benjamin Netanyahu and Yisrael Beytenu chairman Avigdor Liberman may seem to be star-crossed lovers who could not find each other’s arms until a year and two months after the last election, but really, they were more like mortal enemies.Liberman decided, ahead of last year’s election, that he was sick of Netanyahu.He refused to join the government, and decided to torment him from the benches of the opposition with sharper barbs than any of the left-wing parties. The Likud, then, was sure to respond in kind.Here are some of the juiciest insults the sides have thrown at each other this past year: • “Liberman is trying [to be]... a military commentator who doesn’t meet the basic standards. The only thing that has whizzed past his ears is a tennis ball. A man who never led even one soldier into battle and never made an operative decision in his life, and never sat through an entire security cabinet meeting cannot be a military commentator.” – Likud statement earlier this year about our soon-to-be defense minister • “Some choose to blather and plan political conferences, and some are blocking pressure on the State of Israel and strengthening our international treaties." – Netanyahu, in response to a Liberman conference with MK Yair Lapid (Yesh Atid) lamenting Israel’s “failed” foreign policy • “He must be preparing for Purim... Liberman is an opportunist pretending to be right-wing.” – Likud statement • “Netanyahu isn’t Left or Right. He has no ideology. He is the ultimate Mr. Zigzag. He may be the world champion of zigzaggers.” – Liberman, Yisrael Beytenu faction meeting • “He is a liar, a fraud and a crook. Those are the words I can say about our prime minister. He brazenly defrauds the people of Israel.” – Liberman, Army Radio interview • “They are simply schlemiels who don’t know how to rule or manage properly. Netanyahu and [Defense Minister Moshe Ya’alon] are not worthy of leading the country.” – Liberman • “Netanyahu should get a Nobel Prize in political charlatanism.” – Liberman