MKs Ohana and Shmuly part of delegation to state facing backlash for law that would not protect state employees from discrimination based on sexual orientation and gender identity. 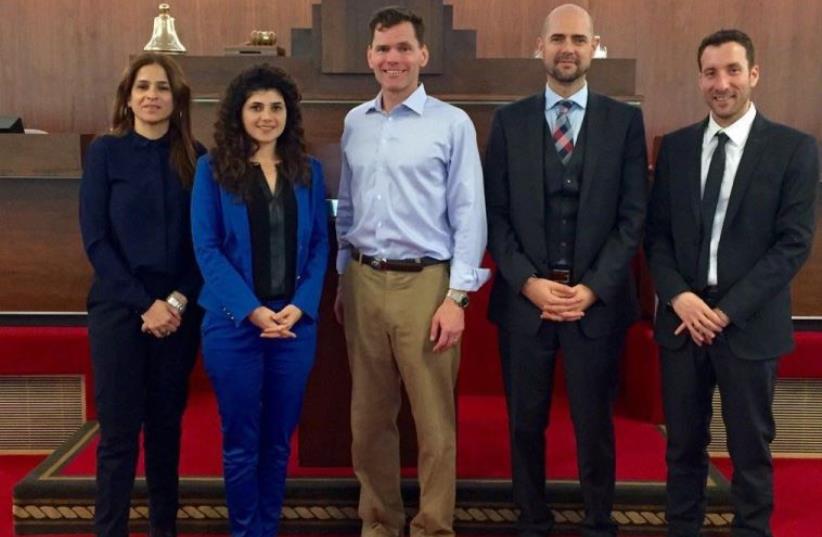 MK Merav Ben-Ari, MK Sharren Haskel, North Carolina State Rep. Grier Martin, MK Amir Ohana and Itzik Shmuly
(photo credit: Courtesy)
Advertisement
When MKs Amir Ohana (Likud) and Itzik Shmuli (Zionist Union) agreed to take part in a US State Department- sponsored trip to America, they didn’t realize that they, the Knesset’s only two out homosexual members, would find themselves in the eye of a storm over gay rights in America.Ohana and Shmuli, along with MKs Merav Ben-Ari (Kulanu) and Sharren Haskel (Likud), arrived in Chapel Hill, North Carolina, one of the legs of their two-week trip, as the state was experiencing a backlash against state laws that would not protect state employees from discrimination based on sexual orientation and gender identity.North Carolina Governor Pat McCrory used an executive order on Tuesday to restore the right to sue in state court for discrimination on those grounds, but the Republican stood firm on a controversial provision barring transgender people from using bathrooms or locker rooms in schools and other public facilities that do not match the sex on their birth certificate.Shmuli and Ohana said on Wednesday that they brought the issue up in all of their meetings in North Carolina.“I told them that the four of us support equality for the LGBT [lesbian, gay, bisexual, transgender] community in various ways, and therefore, we are concerned about the law,” Ohana recounted.Ohana said that, while there are places in the world that are worse for LGBT people than North Carolina, it was only one of two places in the world that have regressed in terms of gay rights. The other place is Russia.“We know that some groups may like [the law], but they’re getting smaller and smaller in light of the protests,” he added.Earlier on Tuesday, Deutsche Bank announced it was freezing plans to create 250 jobs at its software application development center in Cary, North Carolina, as a result of the anti-gay measure.Last week, PayPal Holdings canceled plans to open a global operations center in Charlotte, North Carolina, and invest $3.6 million in the area, and rock star Bruce Springsteen canceled a concert in the state to protest the law.Documentary filmmaker Michael Moore said on Twitter on Tuesday he had asked his distributor to no longer book his latest movie in North Carolina theaters.Asked if he supports the boycott tactics, Ohana said: “I think it’s good that there is broad agreement that the law is bad, and everyone can choose his or her way to fight against it.“There are a lot of ways.[Springsteen] could put on the concert and speak out strongly against the law and get great applause from the crowd, and the effect would have been no less strong,” the Likud MK posited. “Either way, it’s good that people are fighting this bad law.”The four MKs were in the US, visiting Washington and New York as well as North Carolina, on a trip sponsored by the International Visitor Leadership Program, a project of the US State Department’s Bureau of Educational and Cultural Affairs. The lawmakers, freshmen except for Shmuli who is serving his second term, and all aged 40 and under, learned about the US government system from academics and consultants, and are expected to meet members of Congress.They also met with leaders of AIPAC, J Street, the American Jewish Committee and the Arab-American Institute.Reuters contributed to this report.