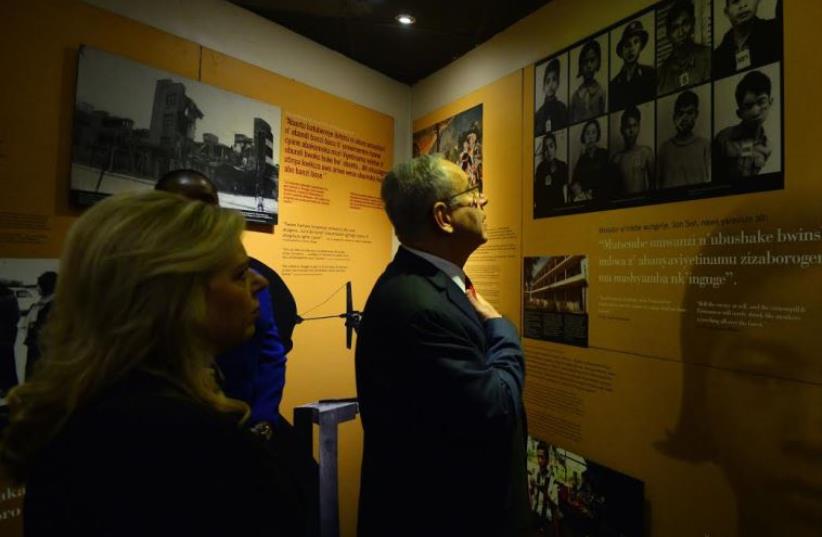 Prime Minister Benjamin Netanyahu at Kigali Genocide Memorial
(photo credit: KOBI GIDON / GPO)
Advertisement
KIGALI, Rwanda – Many are the elements that tie countries together: common values, common interests, cultural affinities.But it is something completely different that has cemented the ties between Israel and Rwanda: genocide.When the mass murder of 800,000 people in Rwanda, mostly of Tutsis by Hutus, ended after 100 days in 1994, and the government responsible for the genocide was overthrown, the new government looked to Israel as a model of how to emerge from the ashes.It was clear, therefore, that Prime Minister Benjamin Netanyahu’s first stop after arriving in Rwanda on Wednesday for an eighthour visit would be the Kigali Genocide Memorial in the hilly capital, a memorial created with assistance from Yad Vashem on how to memorialize tragedy.This memorial would be his first stop not only because Rwandan protocol obligates visiting leaders to go the site, but also because the horrific events commemorated there have created a special bond between the two countries.“My people know the pain of genocide,” Netanyahu said later at a press conference with Rwandan President Paul Kagame. “This is a unique bond that both our peoples would rather not have had. But we both persevered despite the pain, despite the horror we survived.We never, never lost hope. You never lost hope.”Netanyahu and his wife, Sara, toured the harrowing memorial museum, accompanied by Kagame and his wife, Jeannette. The memorial is built adjacent to a mass grave holding some 250,000 people killed in the massacres.Netanyahu somberly set a wreath there, much as foreign visitors to Yad Vashem leave a wreath in the Hall of Remembrance.Afterward he wrote the following in the guest book: “We are deeply moved by the memorial to the victims of one of history’s greatest crimes – and reminded of the haunting similarities to the genocide of our own people.Never again.”Netanyahu said later in the day that the genocides have taught both peoples a number of lessons.One lesson is to combat those who would deny the genocides, by telling the truth. Another is to “understand that incitement and brainwashing and hatred always precede mass murder, and that it must be stopped.”And the final lesson, indeed, the most important lesson, he said, is that “no one will defend you if you don’t defend yourself. They may not even defend you if you can defend yourselves.”Netanyahu said that what both Israel and Rwanda have learned from their blood-soaked past is that “we have to have the capacity to defend ourselves by ourselves. This is the most important lesson of the genocide that we have suffered, and of the one you have suffered.”