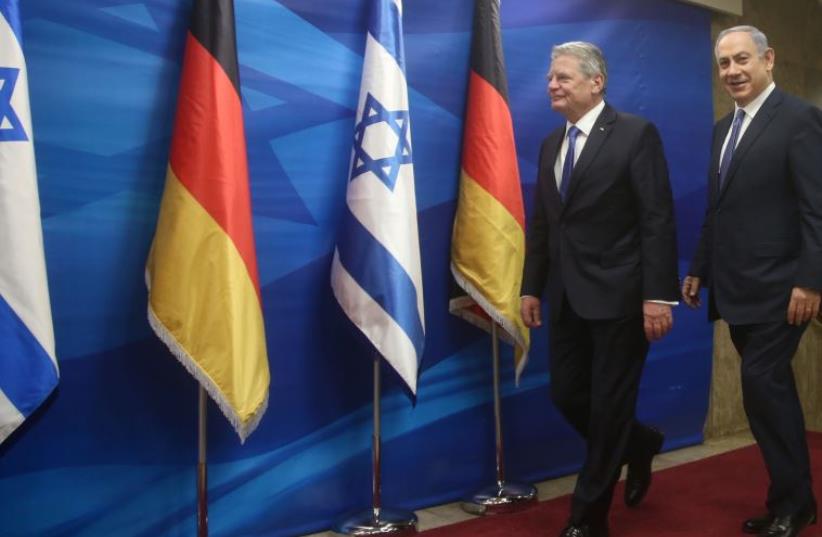 Prime Minister Benjamin Netanyahu (R) with German President Joachim Gauck in Jerusalem, December 6, 2015
(photo credit: MARC ISRAEL SELLEM/THE JERUSALEM POST)
Advertisement
BERLIN - A meeting between the governments of Germany and Israel that was scheduled to take place in May has been cancelled amid rising frustration in Berlin with settlement activity in the West Bank.A German spokesman said the governments had agreed to "postpone" the annual meeting of leaders and ministers until next year, blaming the delay on the busy schedule of meetings surrounding Germany's presidency of the G20.An Israeli Foreign Ministry spokesman confirmed the session has been called off, citing "schedule constraints on the German side".But German officials, speaking on condition of anonymity, suggested the real reason for the cancellation was the feeling that the two governments were too far apart on the issue of Middle East peace to make such a meeting worthwhile.
Germany"s Merkel: Israeli-Palestinian peace plan won"t "be laying on the table tomorrow
"Our relations have been completely pared back," one senior German official said. "We have practically given up on making progress in the current environment."German governments have made strong relations with Israel a top priority ever since World War Two, going to great lengths to make amends for the killing of six million Jews by the Nazis.But relations have grown tense in recent years as Germany questioned Prime Minister Benjamin Netanyahu's commitment to a two-state solution with the Palestinians.The election of US President Donald Trump appears to have emboldened Netanyahu to step up building in settlements, which Germany and many other countries have condemned as illegal and an obstacle to peace.Israel disagrees, citing biblical, historical and political connections to the West Bank and east Jerusalem.Since Trump took office last month, Netanyahu has approved construction of 6,000 settler homes in the two areas, drawing international condemnation which the White House did not join.In recent days, however, the Trump administration has taken a more nuanced position, saying building new settlements or expanding existing ones may not be helpful in achieving peace.Netanyahu is to meet Trump in Washington on Wednesday. Before his departure he sidestepped a question about whether he still supports creation of a Palestinian state, saying he would make his position clear during the visit.