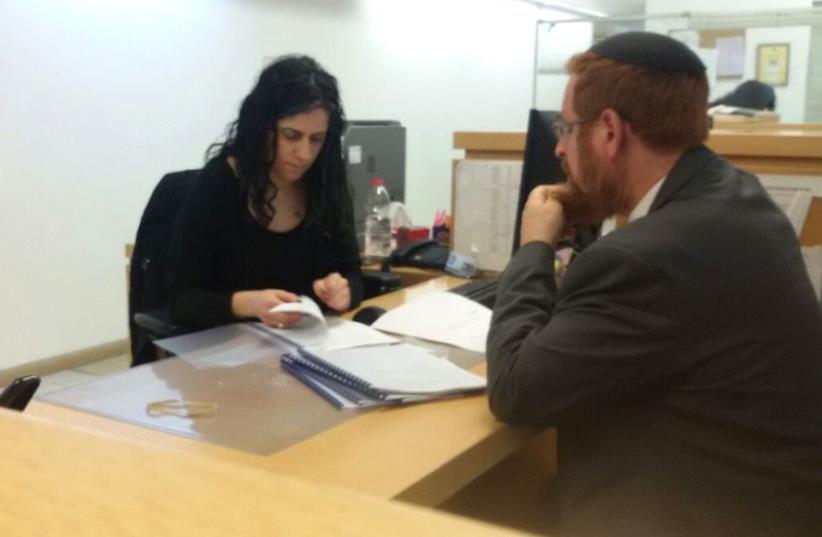 MK Yehudah Glick submitting the petition at the Supereme Court
(photo credit: Courtesy)
Advertisement
MK Yehudah Glick (Likud) submitted a petition to the High Court of Justice on Tuesday asking it to permit Knesset members to visit the Temple Mount.Glick, who was known as a Temple Mount activist before assuming office as a lawmaker, asked the court for an injunction to prevent Prime Minister Benjamin Netanyahu, Police Commissioner Roni Alsheich, Public Security Minister Gilad Erdan and the Knesset Ethics Committee from banning MKs from entering the Mount, effectively allowing the visits.In the petition, Glick claims that the prime minister exceeded his authority when he instructed the police to bar MKs from the compound and that the police itself broke the law when it implemented the order – which he characterizes as being political. Glick also claims the ban violates the freedom of religion.
Yehuda Glick at the entrance to Temple Mount (Video: Jack Brook)
After filing, Glick said that he stands on the Mount with mixed feelings, and that he hopes that soon the prime minister will change the policy so he could retract the petition.“I have made every effort I could to avoid this situation,” Glick told reporters outside the court. “I was in contact with senior figures in the police and in the Prime Minister’s Office, but this reality is intolerable and weird. This is a place that all people – from all around the world – can visit, but not MKs.”Glick said the fact that MKs have legal immunity but are restricted in their movement makes the situation even stranger, “especially in a place that every Jewish person is obligated to visit, a desire of each and every one of us for the past 3,000 years.”“The law is with us,” he added. “This is why I came here, to the High Court.However, I hope that we will reach a point at which the prime minister would change his mind and I could retract my petition.”On Monday it was reported that Netanyahu decided to reassess past policy, which barred lawmakers and ministers from visiting the Temple Mount.According to a Channel 2 news report, the measure would come into force only after considering the security situation in three months’ time, once the Jewish holidays and the Muslim holy month of Ramadan month have passed, because it could spark violence.On Monday, Netanyahu met with security officials including the public safety minister, Shin Bet (Israel Security Agency) director and Jerusalem District police chief to discuss the measure.The Knesset Ethics Committee decided in January to lift the ban prohibiting MKs from entering the area, but Netanyahu’s position on the matter remained unchanged.According to the committee’s decision, the only restriction on lawmakers visiting the Temple Mount would be that they coordinate with the police ahead of time.In response, former environmental protection minister and Labor Party chairmanship candidate Avi Gabbay slammed Netanyahu, saying that all he cares about is scoring points with his constituency.“Considerations of left and right seem unimportant to him,” he said.“Netanyahu cares only about Netanyahu.He goes back to the good old trick of starting a fire for his own personal needs. Visiting the Temple Mount, evacuating settlements or closing the IBC doesn’t really speak to him. What is important is to distract the public’s attention from his failures and his investigations.”Joint List MK Ahmad Tibi said that the prime minister’s decision does not apply to him, because he doesn’t have the authority over the Temple Mount.“The decision whether we visit or not was never in Netanyahu’s hands,” said Tibi, who is also the chairman of his party’s Jerusalem committee. “Al-Aksa Mosque is a Muslim prayer mosque only, and the people who are inciting and fanning the flames here are Netanyahu’s friends and supporters – a group of right-wing politicians that are entering the compound.”