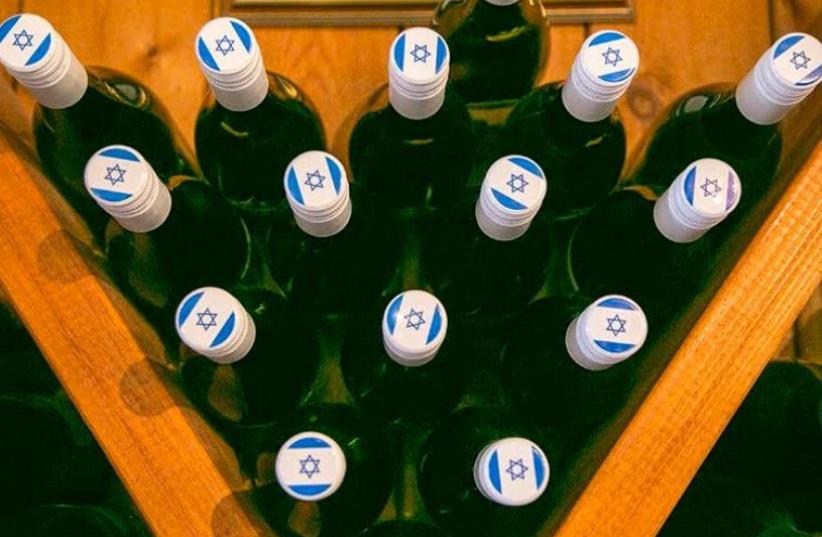 Bazelet HaGolan wine with Israel flags printed on bottle seals
(photo credit: DAN BAR DOV)
Advertisement
A winery in the Golan Heights has decided to print Israeli flag emblems on the caps of bottles headed for sale in Europe, in "outright defiance of European boycott threats" on Israeli products made beyond the Green Line. The boutique Bezelet HaGolan Winery on Thursday announced its plans to print the blue-and-white hallmark of the Jewish state on the seals of Chardonnay bottles destined for export to countries in the EU.The winery's move came a day after the European Union published new guidelines on labeling what the body calls "Israeli settlement products.""We are proud of our national flag and hope that other wineries will follow our example and bare the Israeli flag on wine bottles destined for export to Europe," said the winery's founder and head winemaker Yoav Levy.Levy called for Jews around the globe to exclusively purchase "blue and white" products in support for Israel, adding that the Europeans would only lose out from the EU's decision.The Bazelet HaGolan Winery, located at the village of Kidmat Zvi, expects this year's harvest to yield some 80,000 bottles of wine from the Golan region, where high elevations and temperature patterns are suited for viticulture. About a quarter of the wine production is expected to be exported. While the United States is the single largest importer of Israeli wines, in 2014 Israeli wine exports were valued at about $33 million with some 20% of the country's total product being distributed for sale abroad.Israeli's total revenue from wine production in 2015 is set to reach an estimated billion shekels. The EU's position is that the territories Israel captured in the 1967 Six Day War - including the West Bank, east Jerusalem and the Golan Heights - are not part of the internationally recognized borders of Israel.As such, the EU views that goods from there cannot be labelled "Made in Israel" and should be labelled as coming from settlements, which the body considers illegal under international law.Since 2003, the EU has placed a numerical code on Israeli imports to allow customs to distinguish between products made within the Green Line and those that are produced beyond it.The guidelines extend that process one step further, providing member states legal instructions as to the placement of consumer labels on relevant products to inform European consumers that they are not made in Israel.On Wednesday, Jerusalem suspended diplomatic dialogue with the body for a few weeks to strongly protest Brussels' decision to publish the legislation guidelines that allow member states to place consumer labels “Not made in Israel” on products produced over the Green Line.

Tovah Lazaroff and Reuter contributed to this report.