“Many precious sites are under real and imminent threat of destruction today...UNESCO’s attention should not be wasted on this sort of symbolic action.” 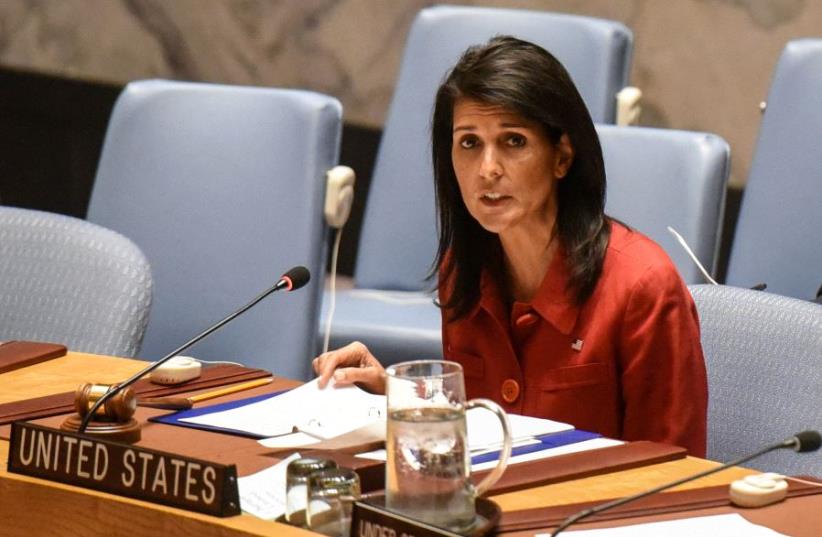 US Ambassador to the UN Nikki Haley delivers remarks at the Security Council meeting on the situation in Syria at the UN Headquarters, in New York, US, April 7, 2017
(photo credit: REUTERS)
Advertisement
The United Nations should opposed the Palestinian Authority request to inscribe Hebron’s old city and the Tomb of the Patriarchs on the World Heritage in Danger list, US Ambassador to the UN Nikki Haley said on Monday in advance of Friday’s vote on the matter in Krakow, Poland.“The Tomb of the Patriarchs, which is sacred to three faiths, is under no immediate threat. Such a designation risks undermining the seriousness such an assessment by UNESCO should have,” Haley said.She issued the statement in a letter she addressed both to UN Secretary-General Antonio Guterres and UNESCO Director-General Irina Bokova.“Many precious sites — from the Democratic Republic of the Congo to Libya to Iraq to Syria — are under real and imminent threat of destruction today. They urgently demand UNESCO’s full and immediate attention, which should not be wasted on this sort of symbolic action,” she said.“As the United States is engaged in trying to increase the chance of a peace deal that is in the best interest of both Israel and the Palestinians, this effort at UNESCO — the motto of which is “Building Peace in the Minds of Men and Women” — is particularly ill-timed and unfortunate,” Haley wrote.“I hope you will join the United States in opposing this measure,” she added.The US is not one of the 21-member state of the World Heritage Committee, which is examining inscription requests for 35 sites during its Krakow meeting that ends began Sunday and ends on July 12.Israel’s Ambassador to the UNESCO Carmel Shama HaCohen thanked Haley and the US for its strong support.“The letter speaks for itself on the absurd pursuit of the Jewish state in every international forum, especially in UNESCO,” Shama HaCohen said.These words “should be repeated by every nation in the free world, but the majority of them prefer to remain silent and to roll their eyes,” Shama HaCohen said.He alluded to the fact that the vote was taking place in the same country where so many Jews had perished in concentration camps during the Holocaust.“This pursuit of the Jewish state is taking place a short drive away from the most horrible and sensitive place from a Jewish perspective, and from the perspective of any human being who has not lost his soul,” Shama HaCohen said.The Palestinian Authority can request the inscription because the United Nations Educational, Cultural and Scientific Organization recognized Palestine as a member state in 2011. Since then its World Heritage Committee has inscribed two West Bank sites to the state of Palestine to its endangered list; the Church of the Nativity in 2012 and the agricultural terraces of Battir in 2014.The International Council on Monuments and Sites which evaluates inscription requests for the World Heritage Committee did not recommend Hebron’s old city and the Tomb of the Patriarchs for inscription.It said it had not been able to assess the danger to the site because Israel refused to allow its team of experts to make a field visit and asked that permission for a trip be immediately granted.With regard to the overall question of inscription, it said that the PA’s focus on the Mamluk and Ottoman periods weekend its case, because there were other better examples of such architecture.What made Hebron unique, it said, was its ties to three monotheistic religions including the Biblical area of Tel Rumeiea, which was not part of the inscription request. Hebron and the Tomb of the Patriarch’s is the second holiest site in Judaism and the fourth in Islam. The Herodian building built on top of the cave where the patriarchs and matriarchs are buried, houses both Jewish sanctuaries and the Ibrahimi Mosque.The PA had initially intended to inscribe the site through the normal procedure, but changed its mind this spring, out of concern that actions by the IDF and settlers living in Hebron were harming the historical integrity of the old city and the Tomb of the Patriarchs.It presented UNESCO with a long list of violations including acts of vandalism and property damage.