The US will not stand quietly by should the United Nations Human Rights Council turn to the International Court of Justice against Israel, promises US Ambassador to the UN Nikki Haley. 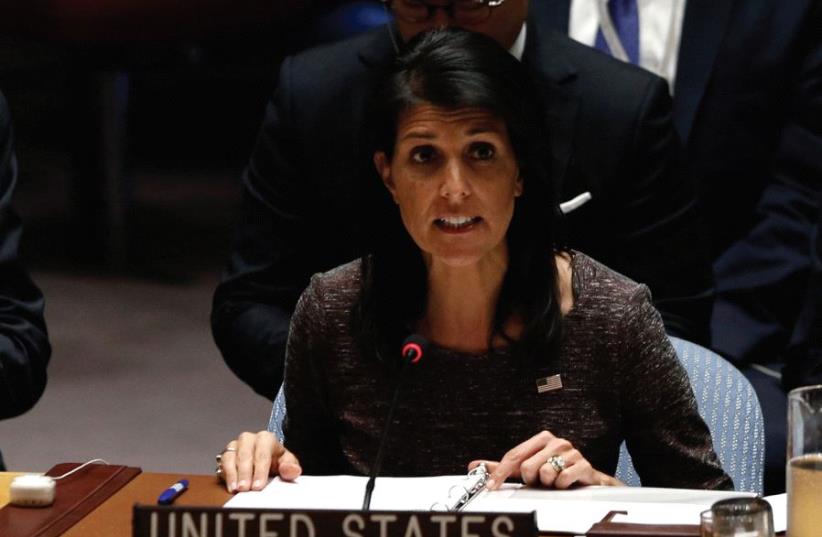 US AMBASSADOR to the United Nations Nikki Haley speaks following a vote at the Security Council
(photo credit: REUTERS)
Advertisement
The United States warned that it could leave the United Nations Human Rights Council if it turns to the International Court of Justice at The Hague for its opinion on Israeli actions in the West Bank and east Jerusalem.US Ambassador to the UN Nikki Haley issued a statement on the matter after learning that the UN might ask the International Court of Justice for a broad advisory comment on the failure of both Israelis and Palestinians to comply with humanitarian law.High Commissioner for Human Rights Zeid Ra’ad Al Hussein plans to make an initial request to this effect when he addresses the UNHRC next Monday.The initial request was part of a report he published this week called “Ensuring accountability and justice for all violations of international law in the Occupied Palestinian Territory, including East Jerusalem.”While the International Court of Justice request would include both Israeli and Palestinian actions, Haley is concerned that the focus of an ICJ hearing and subsequent advisory ruling would deal almost solely with Israel.Haley was also worried by statements in the report that supported a business boycott of Israeli products produced over the pre-1967 lines.“The report recommends that the UN General Assembly – through the Human Rights Council – ask the International Court of Justice to issue yet another advisory opinion focused on Israel, a move that is completely out of the purview of the High Commissioner for Human Rights,” her office said.“Among other one-sided conclusions in the report, terror attacks by Hamas and other violent groups are brushed over, instead choosing to fixate on matters like the human rights practices of companies in the region,” Haley’s office added.
Nikki Haley blasts UN rights forum for "chronic anti-Israel bias" (credit: REUTERS)
“It is actions like these that are forcing us to evaluate the United States’ future on the Human Rights Council. The Council, and indeed the entire United Nations, were founded on the principles of equality and fairness. This report once again fails that mission,” it said.“This report is just the latest example of the Human Rights Council singling out Israel rather than focusing on the world’s actual human rights abusers. Not only does it undermine the credibility of the Human Rights Council on human rights issues, but it once again highlights the unfair bias of the UN when it comes to the Israeli-Palestinian conflict,” Haley said.In 2004, the ICJ advisory opinion stated that Israel’s security barrier and West Bank settlements were illegal under international law.Zeid has now suggested that the ICJ take a broader look at the Israeli-Palestinian conflict so that the UN would have stronger tools by which to enforce compliance with its resolutions and recommendations.Last week Haley told the UNHRC that it must take a number of measures to halt its anti-Israel bias, including halting its efforts to produce a black list of international companies working with Israelis businesses located over the pre- 1967 lines.She has also asked it to rescind the mandate which requires it to debate alleged Israeli human rights violations at every session. This is done under Agenda Item 7.The UNHRC will hold its Agenda Item 7 debate on Monday as part of its 35th session.