Haley to President Rivlin: All I did at the UN was tell the truth

Israel's President couldn't hide his excitement upon meeting one of Israel's greatest supporters; "We appreciate your strong stand on the world’s most important stage" 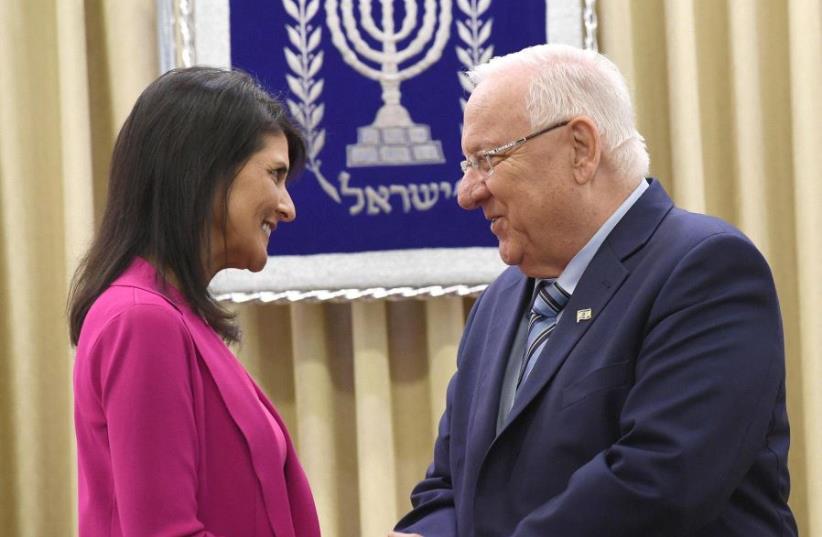 US Ambassador to the UN Nikki Haley meets with Israel's President Reuven Rivlin during her visit to Israel.
(photo credit: Mark Neiman/GPO)
Advertisement
Over the years, royalty, heads of state and government, high-ranking ministers and diplomats from many countries have visited the President’s Residence, but seldom has the visit of any dignitary generated as much excitement as that of US Ambassador to the United Nations Nikki Haley.For more than an hour before her arrival on Wednesday, members of the president’s staff were moving flags and chairs – a centimeter in one direction then another, then back again – as if it was going to make much difference.Press photographers and television crews were no less pedantic about what to them was obviously an historic opportunity. They kept testing microphones over and over again, moving chairs and flags ever so slightly in one direction or another to get the best angles for capturing a meeting to be preserved for posterity.They didn’t go in for nearly as much fine detail last month for the visit of US President Donald Trump.But there was a difference. Trump had been Israel’s best friend before his election and then, like his predecessors, had reneged on his promise to move the US Embassy from Tel Aviv to Jerusalem. Haley had proved to be Israel’s best friend in the United Nations after she was appointed – and therein lay the almost palpable difference.Rivlin who usually welcomes his guests in a loud, hearty hail-fellow-well-met style when emerging from his office into the small and intimate reception hall, instantly clasped Haley’s hands in his. With his face radiant and in a voice so soft that it was barely above a whisper, he told her how delighted he was to see her. “It’s a real pleasure,” he repeated over and over.Haley was accompanied by her Israeli counterpart, Danny Danon, who was warmly embraced by Rivlin – both of them having been Likud members of Knesset in the past. Also accompanying Haley was US Ambassador David Friedman plus a five-member delegation.It was somewhat difficult to reconcile the diminutive figure, with an almost shy demeanor, with the hard-hitting and very determined US ambassador to the UN. The only giveaway to how passionate she can be was her choice of a wardrobe, a hot-pink, slim-fitting dress with a matching loose jacket.
PM Netanyahu meets US Ambassador to the UN Nikki Haley (credit: GPO)
Rivlin always makes a point of welcoming visiting dignitaries to “Jerusalem the capital of Israel” – and even with someone to whom he did not have to emphasize this fact, he could not resist.“You are a dear friend of Israel,” Rivlin told Haley in his official welcome. “We appreciate your strong stand on the world’s most important stage in support of the security of the people and the State of Israel. With your support, we see the beginning of a new era. Israel is no longer alone at the UN. Israel is no longer the UN’s punching bag.”Conceding that there had been some progress in Israel’s relations with the UN, Rivlin said that there is still a long way to go both in holding to account public statements made by officials and in supporting regulation to reduce the disproportionate number of discussions and resolutions against Israel. In this context, Rivlin included the Human Rights Council, which he said had been hijacked as a weapon against Israel, and UNESCO which he stated seeks” to rub out the history of the Jewish people.”Haley said that it was an absolute thrill to be in Israel. She was very appreciative of the support received from the people of Israel, she said, but she felt a little guilty, “because all I did at the United Nations was tell the truth.” She had never taken kindly to bullies, she added, “and the UN has bullied Israel for a very long time.”Pledging that she would not let that happen anymore, Haley declared: “This is a new day for Israel in the United Nations.” She was also optimistic that following her recent visit to Geneva that in matters pertaining to Israel, it would also be a new day at the UN Human Rights Council.She was really looking forward to experiencing as much as she could of Israel during this visit “taking in the history, the beauty and the tradition that all come with the magic of Israel.”