The opposition chief said that the fatal stabbings in the Old City were only a matter of time given the tense atmosphere that took hold over the capital. 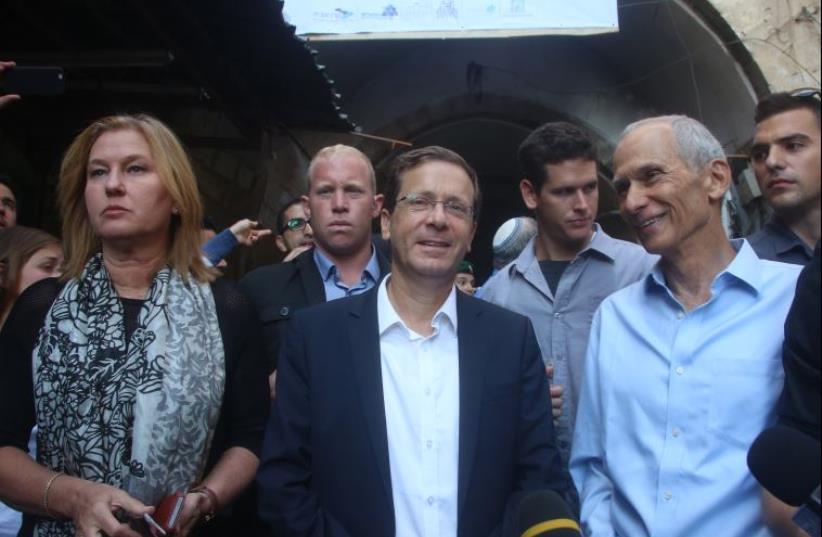 Zionist Union chief Isaac Herzog (center) is flanked by party MKs Tzipi Livni (L) and Omer Bar-Lev during a visit to Jerusalem's Old City
(photo credit: MARC ISRAEL SELLEM)
Advertisement
Opposition leader Isaac Herzog and Yesh Atid chairman Yair Lapid appeared to audition for the role of Prime Minister Benjamin Netanyahu's potential successor Thursday during visits to the site of Saturday night's murders in Jerusalem's Old City.Herzog, followed minutes apart by Lapid, prayed at the Western Wall and made public statements on Hagai Street, where Aharon Benita and Nehemia Lavi were killed Saturday night and an Israeli was wounded by a female terrorist on Wednesday. They each memorialized the victims, strengthened security forces, and met with local residents and friends of the murdered men.
24 hours of terror in Israel
But while Herzog was critical of Netanyahu, he was soft spoken and met the Old City residents privately. Lapid, by contrast, defended Netanyahu and spoke publicly to dozens of Old City teens, telling them he felt their pain and urging them to fight hate with love."It is important for Israel's leaders to come here and tell our enemies they can't scare us," Lapid told English-language media at the site, flanked by Yesh Atid MKs Elazar Stern and Mickey Levy.Lapid praised Netanyahu for barring MKs from visiting the Temple Mount, saying that if legislators in the prime minister's own Likud party oppose the move, it was more important for Yesh Atid to support it. Told that Herzog had called upon Netanyahu to resign minutes earlier, Lapid said it was important for a responsible opposition to back the government when it gets things right.Zionist Union MK Tzipi Livni, who accompanied Herzog and MK Omer Barlev to the terror site, said Netanyahu promised Jordan a year ago to bar lawmakers from visiting the Temple Mount and that it was wrong of him to only implement the decision now. Herzog said that the premier's edict banning MKs from the Mount should have been issued "months ago" so as to "remove extremists from the Temple Mount and stop politicians from going up there."Herzog called on Netanyahu to resign for being "a weak prime minister who performs well as a theater actor but poorly as a leader." He said the prime minister and his cabinet had lost control over everything except their personal Facebook pages."Had we been in government, we would have known to calm the situation in Jerusalem a lot better," the opposition chief said.Before lighting candles to memorialize Banita and Lavi, Herzog said their fatal stabbings were only a matter of time given the tense atmosphere that took hold over the capital."The writing was on the wall for a long time," he said.