Herzog to ‘Post’: We shouldn’t be making careless visits to Mount

Opposition leader says that, while he supports maintaining the freedom for all people to visit the Temple Mount, the activists who visit and encourage others to do so are "hypocritical." 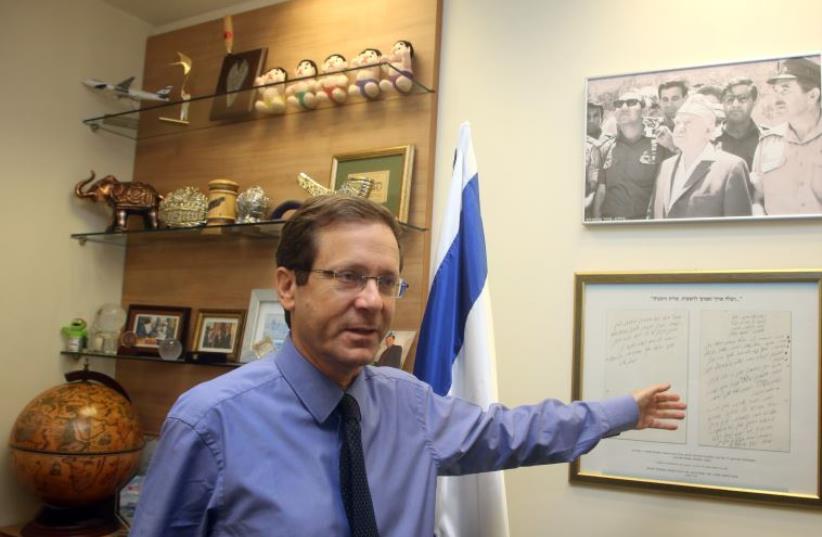 Zionist Union leader Isaac Herzog
(photo credit: MARC ISRAEL SELLEM)
Advertisement
Politicians should not be making "careless” visits to the Temple Mount, opposition leader Isaac Herzog (Zionist Union) said in an interview with The Jerusalem Post on Wednesday, citing a ruling by his grandfather and namesake, former chief Rabbi Yitzhak Halevi Herzog.In 1948, when the Hagana was planning to liberate the Old City of Jerusalem – an effort that ultimately failed – the Hagana’s commander in Jerusalem David Shaltiel sought Rabbi Herzog’s advice, recounts a letter from Rabbi Zalman Menachem Koren to MK Herzog.The rabbi has researched and written extensively about the Temple and its former location on the Mount.Rabbi Herzog instructed Shaltiel to have his soldiers ascend the Temple Mount, remove all enemy forces, leave the compound as soon as possible and seal it off, so that no person may enter – to “lock the place up and throw away the key,” MK Herzog said.“Rabbis throughout the ages, from Rabbi Avraham Yitzhak Hacohen Kook onward, strictly prohibited going up on the Temple Mount. And now there is a minority group of rabbis encouraging Jews to go,” Herzog said. “Even Jewish residents of the Old City oppose it, because they understand the sensitivity, aside from the halachic issues.”Herzog said that while he supports maintaining the freedom for all people to visit the Temple Mount, activists who visit and encourage others to do so are “hypocritical,” because “even the strictest religious Zionist yeshivas oppose it.”When asked why in this case the Zionist Union leader supports following the rabbinate policy, while in others – civil unions, for example – he doesn’t, Herzog said that holy sites are a different situation.“I never argued against the position of the Chief Rabbinate on holy sites, including the Western Wall,” he added, saying that 15 years ago he helped come up with the compromise for the Women of the Wall to pray by Robinson’s Arch, instead of the main plaza – an idea that the group later rejected.In addition, Herzog said the Temple Mount is, during this current wave of terrorism, a matter of life and death.“I’m amazed at the carelessness of [Agriculture Minister] Uri Ariel [of Beit Yehudi] going there to say the Priestly Blessing. We have to be responsible in what we say as leaders. As leaders, we have to prevent actions that can have consequences we don’t understand,” he said.Israel is “in a sea of hundreds of millions of Muslims and we have to be careful,” said Herzog, warning that “our enemies are using [Temple Mount visits] to distort reality.”The Temple Mount is “the most important place for all of us, but we have to be cautious and smart,” he said.The opposition leader also commended the government for its “forceful” actions on the mount “to keep out extreme elements like the Islamic Movement [northern branch] and the Morabitat, and enable the Wakf to stabilize the situation.”Herzog will speak at The Jerusalem Post Diplomatic Conference in Jerusalem on November 18. A full interview with the opposition leader, on diplomatic and political matters, will appear in a magazine being published for the conference.