"Perhaps, we can ensure that the anti-Semitism expressed in recent days is not the example to set to the young British generation," Herzog writes. 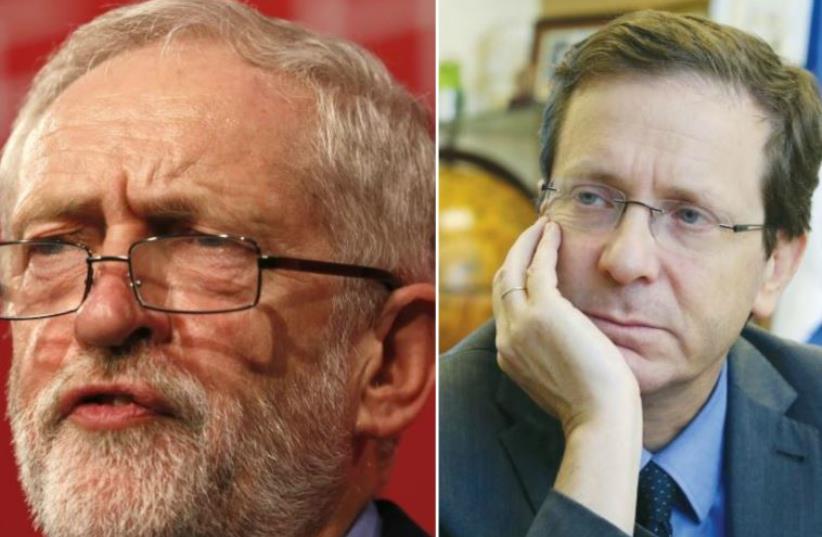 Opposition leader Isaac Herzog (Zionist Union) and UK Labor leader Jeremy Corbyn
(photo credit: REUTERS)
Advertisement
Opposition leader Isaac Herzog (Zionist Union) penned a letter to UK Labor leader Jeremy Corbyn Saturday, in which he expressed outrage over anti-Semitic remarks expressed recently by some party members, and extended an invitation for a delegation to visit Yad Vashem on behalf of the party and bear witness to anti-Semitism at its core."I have been appalled and outraged by the recent examples of anti-Semitism by senior Labor party officials in the United Kingdom...which must act as a red alert and prompt immediate action," Herzog wrote. He penned his letter in light of recent comments made by former London Mayor Ken Livingstone during an interview with the BBC last Thursday, alluding to Hitler being a Zionist. “Let’s remember when Hitler won his election in 1932 his policy then was that Jews should be moved to Israel. He was supporting Zionism,” Livingston said.Livingstone was later suspended from the Labor party for bringing the party into disrepute with his comments. His remarks come at a sensitive time for Labor, which in recent months has seen the suspension of several members, including at the senior level, for anti-Semitic hate speech that critics say party leader Jeremy Corbyn is not doing enough to curb. A day ahead of Livingstone, Labor lawmaker Naz Shah faced suspension over a Facebook post in 2014 suggesting Israelis should be moved en mass to the United States - a sentiment which Herzog said, "sickens all those of moral conscience to the core."Via his letter to Corbyn, Herzog extended an invitation for a Labor Party delegation to visit Israel in order to visit Yad Vashem to "better understand the scourge of anti-Semitism.""While Ken Livingstone is surely anti-Semitic beyond hope of redemption, I'm sure there remain many Labor Party activists with a willingness to engage and better understand the scourge of anti-Semitism," Herzog said."By doing this, perhaps, we can ensure that the anti-Semitism expressed in recent days is not the example to set to the young British generation, but rather one of tolerance and acceptance of all people, regardless of faith."JTA contributed to this report.