Herzog continued the visit to Germany despite a report the previous day that the police requested permission to question him under caution on suspicion of campaign finance violations. 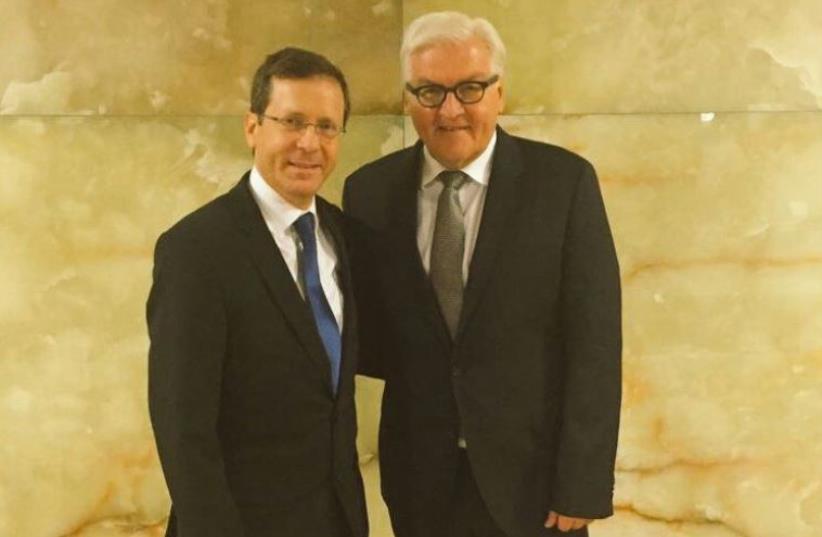 Opposition leader Isaac Herzog meets German Foreign Minister Frank-Walter Steinmeier in Berlin
(photo credit: Courtesy)
Advertisement
Opposition leader Isaac Herzog (Zionist Union) presented his plan to “separate” from the Palestinians to German Foreign Minister Frank-Walter Steinmeier in Berlin Tuesday.Herzog continued the visit to Germany and his scheduled meetings as planned, despite a report the previous day that the police requested that Attorney- General Avihai Mandelblit grant permission to question the opposition leader under caution on suspicion of campaign finance violations.Herzog told Steinmeier that separation is “a critical security step that must be taken quickly, in order to change the reality in which Israelis are murdered and stabbed in the streets.”He also warned that Hamas may initiate another round of fighting.“Hamas is a murderous terrorist organization and rehabilitating it will destabilize regional security,” the politician stated.“Gaza must only be rebuilt in exchange for demilitarization, and we must act with all our might against terrorist tunnels and infrastructure that Hamas is developing while preparing for the next round.”In an apparent criticism of the prime minister, Herzog said “press conferences and declarations won’t solve the problem.”“Only combining strong and focused military force with significant rehabilitation processes will bring a change,” he stated.Meanwhile Herzog’s support within his party is weakening.After an investigation in the campaign finances of the Zionist Union leader was announced March 29, party MKs lined up behind Herzog.But after police called on Israel’s Attorney General on Monday to upgrade the preliminary inquiry into a criminal investigation, some party members have begun quietly discussing replacements for the embattled chairman.On Tuesday, MK Eyal Ben-Reuven, a retired major-general, was the first to publicly voice the concerns growing within his party.Speaking on Israel Radio, Ben-Reuven suggested that the party suspend Herzog as chairman, at least temporarily.“In order to maintain the highest ethical standards, I think that we need to consider [our] options; maybe not resignation, but some kind of suspension. Maintaining high ethical standards for the nation’s leaders is one of the most important issues for the Israeli government.”Ben-Reuven was quick to emphasize that he supports Herzog, and hopes the current investigation ends without an indictment.