MK Osama Saadi spoke out against the bill, referring what he said was “a serious problem in uniting families in the Negev.” 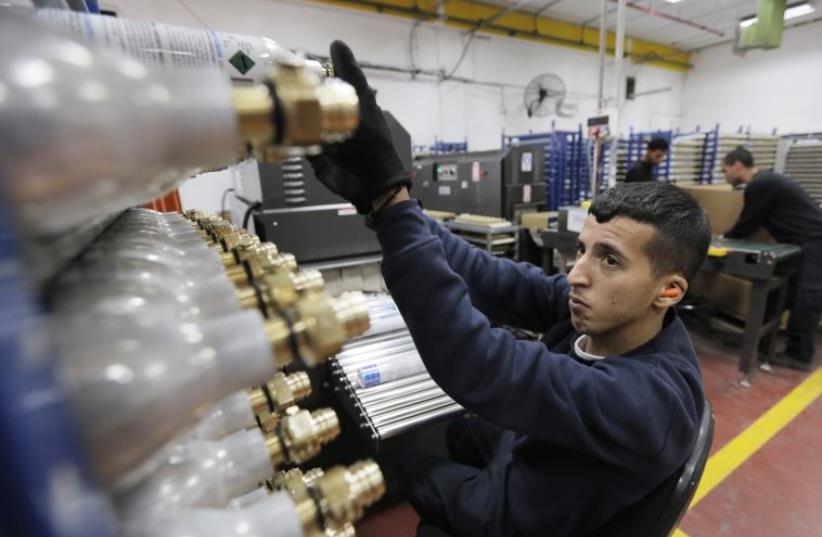 A Palestinian employee works at the SodaStream factory [File]
(photo credit: REUTERS)
Advertisement
Legislation seeking to fight terrorism by removing employers’ incentive to illegally hire Palestinians passed a final vote in the Knesset Monday.Since the current spike in Palestinian terrorism began in September 2015, 73 out of a total of 223 attacks took place within 1949 armistice lines.Of those, 32 (44 percent) were perpetrated by Palestinians who left the West Bank illegally, Public Security Ministry Legal Adviser Yoel Hadar reported to the Knesset Interior Committee. Tens of thousands of Palestinians work in Israel legally, but thousands more do so illegally.“We must deal with illegal entry seriously, thus reducing the number of terrorist attacks,” Hadar said.The bill in question, proposed by the Public Security Ministry, expands the definition of “employer” by law to include anyone who hired a subcontractor who employs Palestinians. In addition, it increases the fines for illegal hiring to a minimum of NIS 75,000 for a first offense by an individual and four times that for a first offense by a corporation.Repeat offenses – including employing two or more Palestinians illegally – will be considered a felony, carrying a four-year prison sentence and a NIS 226,000 fine. A regional police commander will be able to temporarily shut down a place that employed or provided a place to sleep for those working illegally in Israel for up to 30 days and a court can extend that for up to 60 more days.The bill also extends punishment for driving those who entered the country illegally.Knesset Interior Committee chairman David Amsalem (Likud) credited Public Security Minister Gilad Erdan with creating the tools for law enforcement to fight terrorism.“This is not the only tool we need to use,” Amsalem said. “It is no less important to take care of gaps in the fence, in checkpoints and to give more Palestinians work permits. Whoever has a work permit has what to lose and so do his children. We want them to make a living and not join extremists.”MK Moti Yogev (Bayit Yehudi), who proposed a similar bill, said it must be used with operative intelligence and deterrent moves.“I am in favor of increasing work permits for Palestinians, encouraging those that the Shin Bet authorizes and completely banning entry to those they don’t. No one else should be murdered by someone in the country illegally,” Yogev stated.MK Osama Saadi (Joint List) spoke out against the bill, referring what he said was “a serious problem in uniting families in the Negev,” as in, cases in which Israeli Arabs have Palestinian relatives.“Entire families live in Taybeh with children, some of whom don’t have residence authorizations. If someone drives one of the children somewhere, he’ll get four years in prison?” Saadi asked.