Dermer held meetings throughout last year with most of the 46 members of the Congressional Black Caucus. 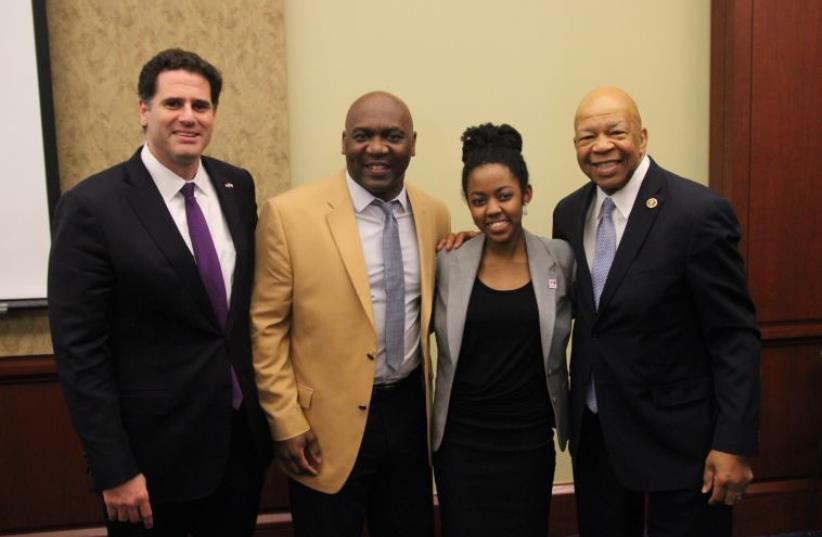 From left: Israel's envoy to the US, Ron Dermer, Congressman Elijah Cummings, former NFL player Thurman Thomas, and an unidentified woman
(photo credit: Courtesy)
Advertisement
Ron Dermer, Israel’s ambassador to the United States, marked Black History Month by highlighting an unexpected byproduct of the Iran nuclear deal: his closer ties with the Congressional Black Caucus.Last year, Democrats were of course generally consternated that Barack Obama and Benjamin Netanyahu were arguing over the deal - with the president pushing hard for it and the prime minister pushing back. But black lawmakers further saw Netanyahu’s speech to Congress in March as a slight of the first black president.Rep. Charlie Rangel, D-NY, told me at the time how impressed he was with Dermer’s outreach. But I didn’t realize until the Israeli Embassy’s Black History Month event Wednesday evening at the Capitol how intensely the ambassador sought to sustain the black-Israel relationship.Dermer held meetings throughout last year with most of the 46 members of the Congressional Black Caucus. His goal was not just to change minds about the Iran deal (in retrospect, that was probably quixotic) but also to keep doors open for dialogue.His speech Wednesday in the Capitol’s visitor center was a candid account of his awakening to the need to nurture the relationship – and to keep an open mind. Most revealing, I thought, was Dermer’s confession that he has learned more about the African American struggle as an ambassador then he did growing up in Miami.“For my generation of Jews having been born and raised in this country, the role played by Jews in the civil rights movement of the 1950s and the 1960s was actually a part of our Jewish identity. It was part of what we were taught in our schools and in our synagogues, and it was part of the commitment we were taught towards social justice.” he said.“And the truth of the matter is though, while I always had this affinity, it was only when I began serving as Israel’s ambassador to the United States that I realized how little I understood about the concerns about the African American community.”As envoy, Dermer has made a point, when traveling to points south, to visit markers of the civil rights movement, in Birmingham, Memphis, Atlanta and Montgomery, Alabama.“And last year I began to reach out to members of the Congressional Black Caucus, and what triggered me reaching out to it was actually a disagreement over a very important issue between the Jewish prime minister of Israel, and between the African American president of the United States, on a very important issue,” he said.“And I reached out because I did not want the disagreement, a legitimate disagreement between two people, to lead to a rupture between two communities. That relationship between the Jewish community and the African American community was too important to me both because of what it has meant in the past and what I believe it means for the future.”The event was co-hosted by Rep. Elijah Cummings, D-Md, whose program, the Elijah Cummings Youth Program in Israel, brings 12 Baltimore area African American high school seniors to Israel each year. In its 20 years, the program has sent 200 students to Israel, and Cummings said it has a 100 percent university graduation rate.The event - the first time I ever encountered kosher collard greens, incidentally - filled a room on a night of torrential flooding, when local news outlets urged Washington, DC folks to get home, pronto. Also attending were Reps. Hakeem Jeffries, D-NY, Ted Deutch, D-Fla., Nita Lowey, D-NY, Rangel, D-NY, Donald Payne, D-NJ, and Alma Adams, D-NC.