The alternative Jerusalem Day march on Sunday is known as the "March of the Families.” 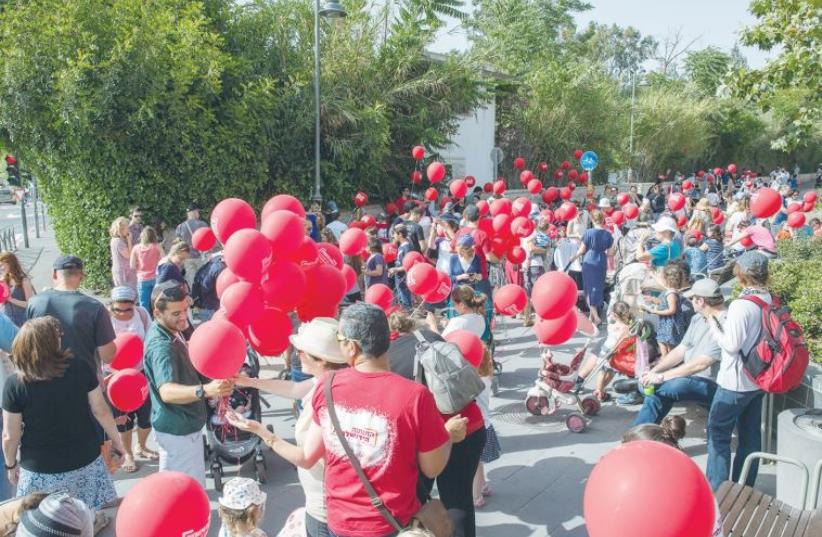 PARTICIPANTS IN THE alternative Jerusalem Day event, March of the Families, receive balloons yesterday.
(photo credit: NOAM FINER)
Advertisement
Several hundred people took part in an alternative Jerusalem Day march on Sunday known as the “March of the Families” an event established by the Yerushalmim Movement which, say the organizers, is designed to give expression to a larger cross-section of the population than is represented in the main march. In recent years, the “Dance of Flags” parade which begins at Damascus Gate and winds through the Muslim Quarter of the Old City of Jerusalem has been accompanied by inflammatory chants, and disruptive behavior inside the Muslim Quarter. Yerushalmim director Shira Katz-Vinkler, said that Jerusalem Day had become a political event for a specific sector of the population, specifically the national-religious community, and that the purpose of the alternative march was to give the celebration broader appeal. “Parts of the traditional march are problematic, the route they take does not respect the Arab population, we have seen a lot of violence in the past, and people are taking ownership of a celebration and taken it in a narrow [minded] direction which doesn’t accept that we are all part of Jerusalem and all have a right to live here,” she told The Jerusalem Post. “We want to make an event which celebrates Jerusalem and which connects between the city’s different communities and sectors, with a message of respect for all.”Sunday’s “march of the families” started out in the German Colony neighborhood of the capital and flowed along the old railway line to the First Station complex accompanied by the Marsh Dondurma band and hundreds of balloons handed out by the Yerushalmim MovementRabbi Aharon Leibowitz, a member of the Jerusalem Municipal Council for the Yerushalmim party who participated in Sunday’s march, said that many of Jerusalem’s residents do not connect with central parade, which he said is dominated by nationalist sentiment from the religious-Zionist sector. “We need joy and love and inclusiveness,” said Leibowitz. “There is joy in the main march but it has also contained elements of hooliganism and civil disruption in the Muslim quarter, although these are not the majority of participants.”“We feel that many people in Jerusalem don’t connect to this event, emotionally, or ideologically, but are looking for Jerusalem Day event which they can identify with.”Many participants in the march said they were there simply because it was a family friendly way of celebrating Jerusalem Day and said they were not opposed to the main march through the Old City.  Sarit Yarden, a resident of Abu Tor, said however that she was marching as a statement for pluralism in the capital. “I think the flag march, unfortunately, has sometimes derailed to some racist attacks which I don’t want to be part of so I prefer this event,” she said. Eli Harel, another participant at the event with his family said he does identify with the central Jerusalem Day march in the Old City and does not see it as negative, but added that since others do not he wanted to mark the day at an event where everyone feels comfortable. “We want to celebrate this celebration of Jerusalem and we want to do this with every Jerusalemite who wants to do so as well, including those of different ages, as well as with secular Israelis at a place where everyone can connect to the day,” he said.