Dr. Zvi Zameret, the former head of the Education Ministry's pedagogical secretariat, wrote a stinging op-ed in 'Makor Rishon' on Friday that was harshly critical of Wallstrom. 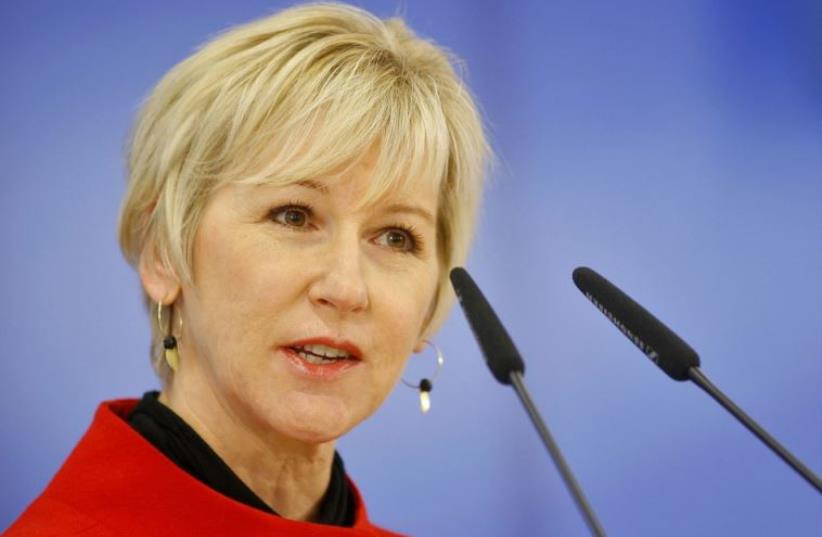 Swedish Foreign Minister Margot Wallstrom
(photo credit: REUTERS)
Advertisement
A former senior Education Ministry official denied on Tuesday that he implicitly called for the assassination of Swedish Foreign Minister Margot Wallstrom.Dr. Zvi Zameret, the former head of the ministry's pedagogical secretariat, wrote a stinging op-ed in the right-leaning Makor Rishon newspaper on Friday that was harshly critical of Wallstrom.Sweden's top diplomat has provoked anger in Israel for her repeated comments criticizing the government and the security forces for what she perceives as a heavy-handed response to Palestinian terrorism.Wallstrom infuriated Jerusalem last month by accusing it of extrajudicial executions and disproportionate force in responding to the current wave of Palestinian terrorism.The foreign minister, who has triggered several diplomatic incidents with Israel since taking up her post in October 2014, was asked in the Swedish parliament by Liberal MP Mathias Sundin why she has not condemned in strong terms the recent wave of terrorism in Israel.Wallstrom said that the attacks were “terrible” and “must not happen,” and added that Israel has “the right to defend itself.”But then she went on to say that the response cannot be “extrajudicial executions” or a reaction that is “disproportionate” so that the “numbers of dead on the other side” is several times greater.In his op-ed piece titled "Margot Wallstrom's source of inspiration," Zameret wrote that the foreign minister's attitudes stem from the same "anti-Semitism, arrogance, and ignorance" that was displayed by the Swedish diplomat Count Folke Bernadotte, the United Nations mediator who was assassinated by right-wing Jewish militants opposed to his peace proposals in 1948.Zameret made the case that Bernadotte's proposals for Arab-Israeli peace were aimed at rolling back the UN Partition Plan that was voted on and approved on November 29, 1947. The motivation for the count's intentions, Zameret suggested, was anti-Semitism."I am convinced and certain that [Wallstrom's] designs will evaporate, just as all of the disreputable count's designs evaporated," Zameret wrote.The last sentence evoked controversy on social media, with some speculating that Zameret was implicitly suggesting that Wallstrom will meet the same fate as Bernadotte."No, no, no, God forbid," Zameret said when contacted by The Jerusalem Post on Tuesday. "I decry all murder. I am not one of those who believe that the solution is killing.""I'm happy that Bernadotte's plan was rejected," Zameret said, but that in no way means that he was pleased with the assassination.The former Education Ministry official went on to say that "what Wallstrom said is unacceptable.""We are defending ourselves [against Palestinian terrorism]," Zameret said. "What are we supposed to do? Hug those that try to kill us."When asked if Israel was using excessive force in subduing Palestinian terrorists, as Wallstrom has suggested, Zameret said: "That's what someone who doesn't know what they're talking about is saying.""I'm certain that if terrorists were killing people for 100 consecutive days in Sweden, they would respond the same way," he said.