Knesset passes law to delay IBC launch to May 15 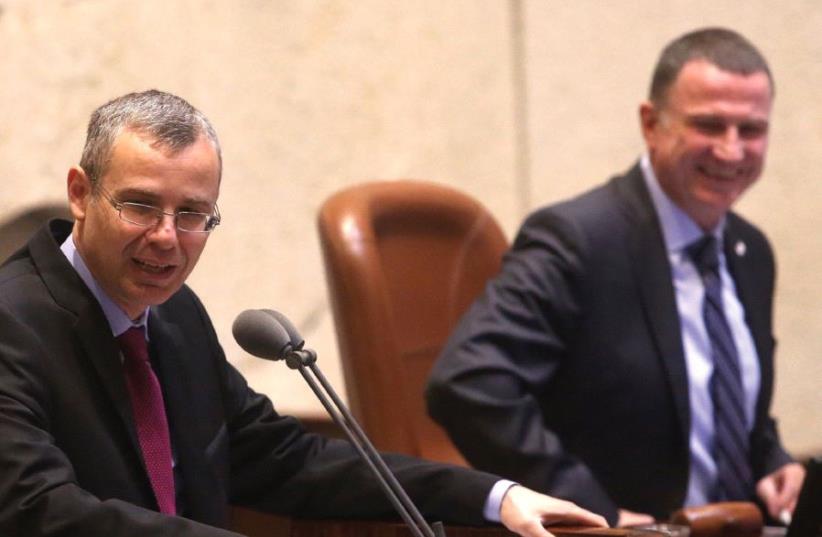 TOURISM MINISTER Yariv Levin addresses the Knesset plenum on behalf of the government, as Knesset Speaker Yuli Edelstein looks on.
(photo credit: MARC ISRAEL SELLEM)
Advertisement
Legislation to postpone the launch of the Israel Broadcast Corporation until May 15 was passed second and third (final) reading in the Knesset on Wednesday night, with 35 in favor and 28 opposed.The two-week delay will provide enough time to change the structure of the IBC news division. Those changes include having the existing Israel Broadcast Authority run the division and removing its news director to be replaced by a committee headed by a judge. The deferral is expected to cost the government NIS 17 million.The revisions came about as a compromise between Prime Minister Benjamin Netanyahu and Finance Minister Moshe Kahlon, whose dispute on the matter led to Netanyahu threatening to call an early election.Coalition chairman David Bitan (Likud) presented the bill to the Knesset and called the postponement a procedural necessary.“You can’t have the IBC start broadcasting in the old format and then change shortly after,” he said. “The delay is reasonable and logical, very short. I think it’s too short... but at this point, it’s what we proposed... If we don’t manage to pass the law to change the IBC’s structure, then of course it will start working on May 15, just as it was prepared to do on April 30.”Though an additional extension past June 1 is not in the amendment to the Public Broadcasting Law, opposition MKs were suspicious that the coalition had more delay tactics in store.“The government is trying to censor [IBC journalists],” Zionist Union faction head Merav Michaeli said. “This two-week postponement is censorship... and coalition chairman David Bitan said he hopes we don’t need two more weeks.”MK Karin Elharar (Yesh Atid), who headed the committee that passed the law establishing the IBC in the last Knesset, said: “I heard background noises, ‘pass it now and we can get another extension later.’ There are things happening that we don’t know about.”Opposition MKs were also angered by the desire of Netanyahu and Likud MKs for the nascent IBC to give them more favorable coverage.MK Michal Rozin (Meretz) said: “The prime minister is trying to stop with all his might any investigative report on him, revelation of truth about him, his ministers, or those close to him. Netanyahu sees the broadcasts in North Korea and is jealous. He wants television that will only show his messages. The public, unlike the government, opposes corruption, connections between the government and the rich, and wants a free, investigative press.”Many opposition lawmakers’ argued against the bill because of the IBA workers who for years did not know what would happen to their workplace and their livelihoods.A large number of those employees will lose their jobs a week before the May 23 election for the head of the Histadrut labor federation, in which MK Shelly Yacimovich (Zionist Union) is running. On Tuesday, Yacimovich said she suspected that the delay until June 1 was designed to help incumbent Histadrut chief Avi Nissenkorn, who is up for reelection.In Wednesday’s debate, Yacimovich spoke out against her opponent, saying how, as a former IBA journalist, she understands their plight.“Nissenkorn did not try for a minute to prevent the IBA from shutting down,” she argued. “One hand is washing the other and the workers – who have been tortured for three years – are being sacrificed. [Nissenkorn] turned the important right to go on strike into a cynical political tool, undermined its status and turned it into a weapon in the hand of those who want to destroy it. This is unforgivable.”Knesset Economics Committee chairman Eitan Cabel (Zionist Union), who supports Yacimovich in the race, said Netanyahu and Nissenkorn took advantage of IBA workers for personal gain.Much to their dismay, opposition MKs were only allowed an 11-hour debate on the bill after the coalition invoked an anti-filibuster measure that allows the Knesset House Committee to set an order for plenum discussions.Zionist Union MKs Stav Shaffir, Ksenia Svetlova and Yael Cohen Paran petitioned the High Court of Justice on Wednesday afternoon for an urgent order to block further debate in the Knesset because of the coalition’s invocation of “rule 98” to block filibusters, saying there was no justification for its use. The court rejected the petition.Despite the limit on debate, some MKs used their time to discuss entirely different topics, including the Palestinian prisoners’ hunger strike, the recent Supreme Court ruling to allow mini-markets in Tel Aviv to open on Shabbat, and “honor killings,” which MK Ahmad Tibi (Joint List) called “primitive” and said “have no honor in them.” The MKs also proposed a number of ways to better spend the NIS 17m. that the two-week postponement will cost.IBC workers held a protest banner in the Knesset visitors’ mezzanine during the debate – in violation of legislature rules – and were removed by ushers.