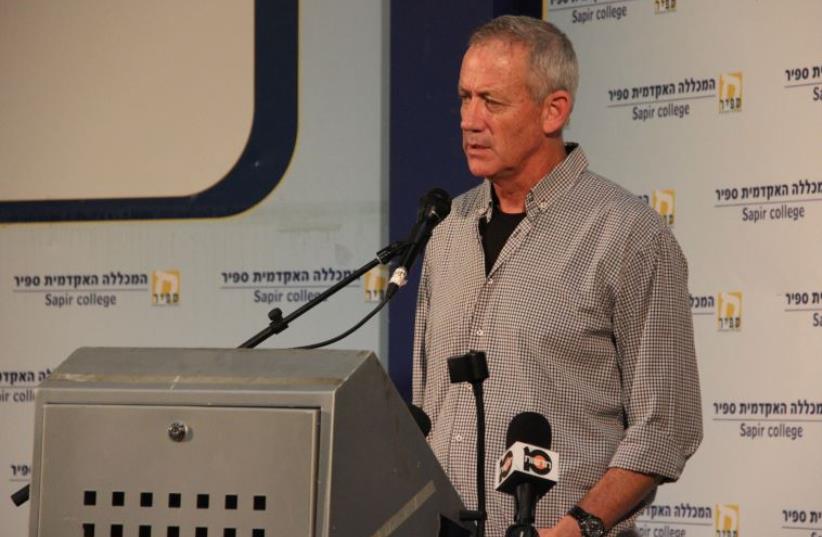 Former IDF chief of staff Lt.-Gen. Benny Gantz
(photo credit: GUY WASSERMAN)
Advertisement
Former IDF chiefs of staff Benny Gantz and Gabi Ashkenazi will not join the Labor Party leaderswhip race by next Thursday’s deadline, sources in and out of the party who have spoken to the two former generals said on Thursday.There had been speculation that one of the two former army chiefs would join at the last minute. But Gantz still has legal obstacles due to a cooling-off period for former generals and neither has done any work toward joining the race.Former prime minister and Labor leader Ehud Barak, who is also a former IDF chief of staff, said firmly in an Israel Radio interview Thursday that he would not enter the race or return to politics.MK Amir Peretz’s candidacy in the July 4 race received a boost Thursday when MKs Hilik Bar and Revital Swid endorsed him, joining MK Itzik Shmuly, who announced he was backing Peretz three months ago. A source close to Peretz said more MKs support him but were afraid to go public before next Thursday’s deadline.“There will be more on the way after it is clear who is running,” the source close to Peretz said. “When they realize no messiah is entering the race, they will come on board to make sure they won’t be left out later on.”Peretz is expected to take a hit in upcoming days when thousands of Labor members will be disqualified for submitting partial membership forms missing key information.An internal probe into Labor began after an Army Radio investigative report found that there were members in the Arab sector who were unaware they had joined the party.Walla News reported this week that Peretz would be hit especially hard by the disqualifications.The site reported that more than half the 1,019 forms with missing information in the party’s southern region came from Peretz’s hometown, Sderot.Peretz’s campaign said it is cooperating with the investigation while trying to salvage as many members as possible.The campaign said that out of 12,000 problematic forms, some 3,000 were from Peretz supporters. There are some 58,000 Labor members.Two more Labor leadership candidates, MK Erel Margalit and former environmental minister Avi Gabbay, as well as Jerusalem mayor Nir Barkat, were sent letters recently from State Comptroller Joseph Shapira’s office reminding them not to use their personal funds for their campaigns, a spokesman for Shapira said Thursday.The spokesman denied a Haaretz report Thursday that Shapira’s office had held hearings on whether to declare membership campaigns run by the three wealthy politicians as illegal campaign contributions.But the spokesman said the three were sent letters reminding them of the law and urging them not to take advantage of a loophole that does not apply to politicians who have yet to declare their candidacies. Margalit only formally announced he was running for Labor leader Tuesday but has been informally campaigning for the post for months.The offices of all three politicians said they had not received Shapira’s letter. Gabbay’s associates said he had made a point of formally joining the race early on.“The letter was not a warning,” the spokesman said.“It was intended to direct them to what the rules are. The comptroller is merely trying to fulfill the biblical commandment of removing a stumbling block before a blind man.”Nine candidates have said they intend to run for Labor leader: Current chairman Isaac Herzog, MKs Peretz, Margalit, Eitan Cabel and Omer Bar-Lev, Gabbay, former Southern Command head Yom-Tov Samia, attorney Eldad Yaniv and historian Avner Ben-Zaken.